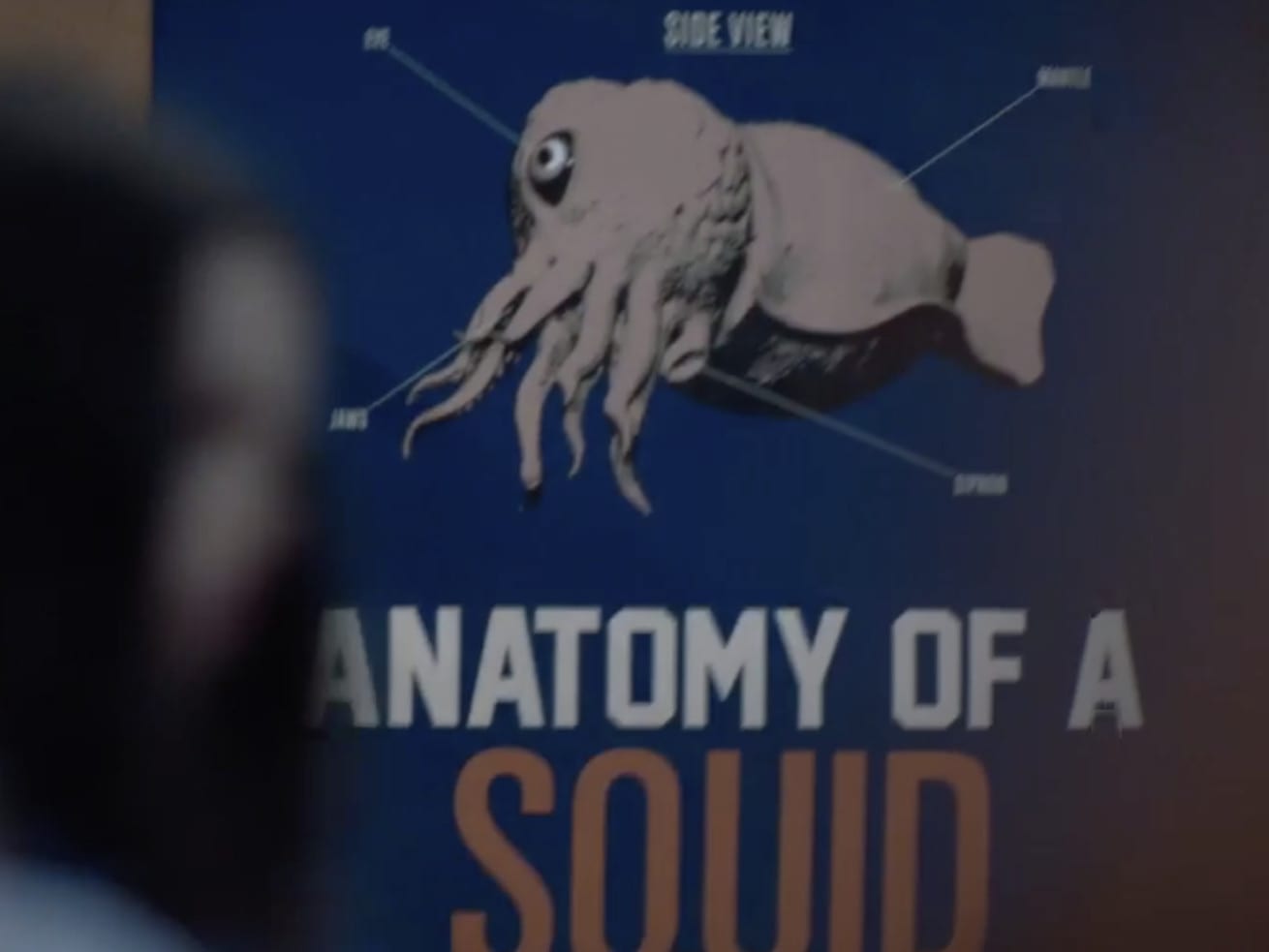 From falling squids to a certain mask …

There’s absolutely no need to read Alan Moore and Dave Gibbons’s 12-issue graphic novel to understand what’s going on in HBO’s new Watchmen series. It’s set in 2019, decades after the events of the novel, and doesn’t focus on those characters (at least so far). In fact, most of graphic novel is equally homaged and spoofed with Watchmen having its own show within a show, called American Hero Story.

But knowing what happens in the source material makes the viewing experience much richer, weirder, and more intriguing. Spotting the references to the original Watchmen challenges viewers to fill in the missing details of the decades that passed in between the comic book and the TV series.

In Watchmen’s first episode, “It’s Summer and We’re Running Out of Ice,” there are a few standout comic book callbacks that made my eyes go wide and my ears perk up. They’re small, subtle ways of adding texture and symbolism to the story — texture that might be lost if you haven’t read the book. Here’s the comic book context behind those moments:

Not long after the show moves to present-day Tulsa, we witness a traffic stop. When the cop asks the driver to hand over his license and registration, the driver opens up his glove compartment and the camera lingers there just long enough to show us a grey, stained ski mask. Meanwhile, back in his car, the cop alerts the station that the suspect has a Rorschach mask, which is a cause for alarm.

This is the show’s first overt callback to the comic. In the comic, Rorschach is the unreliable narrator and violent anti-hero of the book, whose inkblot-style mask is his signature look. His brand of justice is also black and white, and he’s a hateful human being who continues to commit acts of masked vigilanteism, even though it’s against the law. At the end of the comic, he uncovers a plan by an ex-villain named Ozymandias to stop a worldwide nuclear war, by creating a fake threat that will cost the lives of millions of innocent people.

Rorschach is the only hero who doesn’t go along with the plan and threatens to reveal it all, and for that he’s killed — a noble gesture from a guy who is otherwise reprehensible. In the TV show’s period, these masks signal that they’re followers of the long-gone Rorschach, which seems to mean a combination of conspiracy theories, racism, xenophobia, nihilism, and complete and utter distrust of authority.

When Angela is talking to the grade school class about baking and eggs, she transfers a few yolks to a different bowl, and smudges some around to explain how yolks and whites works. The shot from the bottom of the bowl shows that she’s created a smiley face.

In Moore and Gibbons’s comic, the iconic yellow-with-two-black-dots smiley face is peppered strategically throughout the book and appears on the cover of the first issue. The two wanted to use an image that symbolized innocence — they had heard of a study in which babies respond positively to smiles as even as basic as a drawn smiley face — and then sully it to represent the loss of that innocence. And perhaps as an homage to the comic, in the next scene we see Angela and her child driving home, her kid sporting a bloody nose.

In the classroom scene there’s a quick shot of a poster explaining the anatomy of the squid. It’s easy to ignore that, but then comes the next scene: While Angela’s driving, she has to pullover after an alarm. The alarm signals a squid fall, with literally thousands of squid falling from the sky that leave an inky mess in their wake. The squids in both scenes are a direct callback to the comic, in which a giant squid attack changes the entire world forever.

During Angela’s walk to her bakery, there’s a brief shot of the Tulsa Sun newspaper with the headline “Veidt Officially Declared Dead.” Veidt is presumably referring to one Adrian Veidt, the villain of the comic book and an ex-superhero. He wanted to save the world from nuclear war by uniting sparring countries against a common enemy, and he would do anything to make this happen, no matter the millions of lives at stake.

Before dismissing his police force, Chief Judd Crawford yells out “Quis custodiet ipsos custodes?” to his force. The quote, originated by Roman poet and satirist Juvenal, means “Who guards the guards themselves?” Moore uses a different translation of it in the original comic, rendering it as “Who watches the watchmen?”

That quote and its translations are the central theme to Watchmen, which questions who keeps the powerful in check if everyone abandons their personal responsibility to the powerful. Left to their own devices, Watchmen tells us, the powerful are capable of some pretty heinous things.

It’s a bit uncomfortable to hear Crawford use this language right before he grants himself and his comrades use of firearms, and orders them, without due process, to start a raid on the trailer park neighborhood of Nixonville. He also says this right before Angela goes undercover to beat a man to a bloody mess, unrelenting until he reveals to her the Rorschach/Seventh Calvary member that shot the cop.

At the cattle ranch, Seventh Calvary members are fastidiously taking apart watches for some weird mysterious reason. They also sign off the message to the police force with “tick-tock.” In the comics, watches seem omnipresent (the comic is called Watchmen after all), but their appearances are closely tied to the idea of the Doomsday Clock — a clock that symbolizes how close the world is to nuclear war. The twelfth and final issue of Watchmen displays a bloody Doomsday Clock on its cover, and it’s counted down all the way to midnight, signaling an armageddon. The other big clue is Jeremy Irons’s character’s white or “pale horse,” which alludes to the biblical telling of the apocalypse and how Death, one of the four horsemen, will come riding in on a pale horse.

The show’s obsession with clocks and how the Rorschach zealots use them seems to indicate that the Seventh Calvary is planning a big event, perhaps some kind of revenge to avenge the plan that Rorschach was unable to stop.