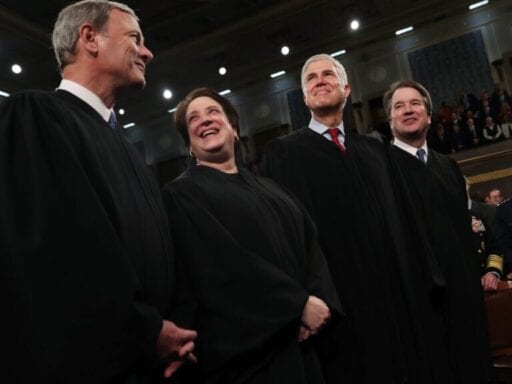 Liberals have had a surprisingly hopeful Supreme Court term so far, but they may not be celebrating soon.

Liberals rarely have much to cheer in late June, when the Supreme Court typically hands down its biggest decisions. So far, however, this term has been an exception. Last week, the Court handed down a broad opinion holding that a federal civil rights law prohibits employment discrimination against LGBTQ people. It also handed down a much narrower opinion allowing about 700,000 undocumented immigrants to live and work in the United States — although possibly not for very long.

Before the next few weeks are done, however, the Court could take a sharp right turn. Among other things, it still needs to decide a case that presents an existential threat to the constitutional right to an abortion. And it could give President Trump sweeping and unprecedented immunity from congressional investigations.

Ordinarily, the justices decide all the cases they heard over the course of a term by the end of June. But the current term been more dysfunctional than usual due to the coronavirus pandemic.

The Supreme Court closed its building to the public in March as a precaution against the virus, and it soon announced that it would not hold its ordinary oral argument sessions in March and April. Instead, the justices heard a subset of the cases the Court originally planned to hear in those two months in May, and heard those arguments in a series of conference calls that were broadcast to the public.

So it’s possible that this unusual schedule will push the Court’s final decisions until later in the summer. Even if that does happen, however, the delay is unlikely to last very long. Within the next several weeks — and possibly within the next several days — the Court could transform several areas of American law.

The Court could effectively eliminate the right to an abortion

For many years, Justice Anthony Kennedy kept an uneasy peace on abortion rights. Though he typically voted to uphold laws restricting access to abortion, he rejected state laws that cut so deeply into the right to an abortion that they threatened to eliminate it altogether.

The Louisiana law at issue in June Medical Services LLC v. Russo is such a law. Like a Texas law that the Supreme Court struck down in Whole Woman’s Health v. Hellerstedt (2016) (while Kennedy was still on the Court), the law at the heart of June Medical requires abortion doctors to have admitting privileges at a hospital near the clinic where they perform abortions.

These admitting privileges laws are a form of what abortion rights advocates refer to as “targeted restrictions on abortion providers,” or “TRAP” laws — laws that superficially appear designed to make abortions safer, but that actually do little or nothing to advance patient health, while simultaneously making it very difficult to operate an abortion clinic.

If the Supreme Court blesses such TRAP laws, that could be the effective end of a constitutional right to abortion. The right to an abortion would technically still be intact — but states could be free to shut down clinics by imposing so many sham health regulations on them that it would be impossible for them to operate.

But even if the Supreme Court rejects this effort to limit abortion rights — at oral argument in June Medical, conservative Chief Justice John Roberts at times appeared uncomfortable with the backhanded way Louisiana hopes to attack abortion rights — the Court still has a solidly conservative Republican majority that is likely to enable states to ban abortion in a future case.

Trump v. Mazars and Trump v. Deutsche Bank are not hard cases. They involve congressional subpoenas seeking many of President Trump’s financial records as a part of various investigations — including an investigation into whether there are “any links and/or coordination between the Russian government, or related foreign actors, and individuals associated with Donald Trump’s campaign, transition, administration, or business interests, in furtherance of the Russian government’s interests.”

Nevertheless, at oral arguments in Mazars and Deutsche Bank, the Court’s Republican majority appeared more concerned with preventing, in Justice Kavanaugh’s words, Congress from declaring “open season” on presidents than it was with following existing law.

So it is possible, perhaps even likely, that the Court will give Trump broad new immunity from congressional investigation.

Even setting aside the possibility that the Court dismantles abortion rights, the Court also heard several significant religion cases this term that could hand victories to the Christian right.

Trump v. Pennsylvania and Little Sisters of the Poor v. Pennsylvania concern whether employers with religious objections to birth control may deny health coverage for birth control to their employees. The Trump administration gave nearly all of these employers a broad ability to do so, although it is far from clear that the administration acted lawfully when it did this.

There is a possibility, however, that the Court will hold that religious employers always have a broad right to deny birth control coverage to their employees, regardless of whether the current administration believes they should have this right.

Two other cases, Our Lady of Guadalupe School v. Morrissey-Berru and St. James School v. Biel, involve the “ministerial exemption” to civil rights laws. Broadly speaking, religious ministers are exempted from anti-discrimination law — a church may fire its preacher because that preacher is a woman, or because they are black. But the definition of who qualifies as a “minister” is unclear.

Both Morrissey-Berru and Biel involve Catholic school teachers who spent a minority of their time teaching religious subjects. If the Court concludes that these teachers qualify as ministers, it could open the door to many other employees of religious employers being defined as ministers as well — stripping those employees of civil rights protections in the process.

Finally, Espinoza v. Montana Department of Revenue concerns whether the state of Montana is obligated to reinstate a scholarship program for private school students, and to permit students at religious schools to obtain these scholarships.

Espinoza could also potentially strike down a state constitutional provision forbidding the state from making “any direct or indirect appropriation or payment from any public fund or monies” to religious institutions, on the (somewhat anachronistic) theory that this provision was inserted into the state constitution because of anti-Catholic bigotry.

Most federal agencies are led by a Cabinet secretary or some other official who can be fired by the president. A few agencies, often described as “independent” agencies, are led by either a single individual or a multi-member board that can only be removed from office for incompetence, malfeasance, or similar cause.

Seila Law v. CFPB involves the Consumer Financial Protection Bureau (CFPB), one of a few agencies with a single director who can only be fired by the president for cause. The plaintiffs in this case claim this unusual arrangement is unconstitutional under a theory known as the “unitary executive.” They also claim that the entire CFPB must be struck down, but the Court is unlikely to sign on to that radical claim.

Assuming that the Court does not toss out the entire agency, the immediate stakes in this case are small and could benefit Democrats — if the president can fire the head of the CFPB, former Vice President Joe Biden could immediately appoint his own choice to lead that agency if he becomes President Biden.

But the long-term stakes are potentially very significant. Most independent agencies — agencies like the Federal Reserve or the Federal Communications Commission — are insulated from the president for good reason. If the president could easily fire members of the Fed’s board of governors, then they could potentially pressure the Fed to juice the economy in an election year and change the outcome of that election. If the president had direct control over the FCC, they could potentially target news networks that run critical coverage of their presidency.

It is unclear whether the Supreme Court will hold that the president has the power to fire members of multi-member boards. But at oral argument, the Court’s Republican majority appeared very likely to say that an agency cannot be led by a single individual who cannot easily be fired by the president.

How has the coronavirus pandemic impacted your life? Share to help Vox’s reporting.
A coronavirus recession will mean more robots and fewer jobs
Progressives warn Warren and Sanders are undermining the movement by fighting
Greta Thunberg is right: It’s time to haul ass on climate change
Good news about America’s Covid-19 vaccine campaign
Trans Twitter and the beauty of online anonymity