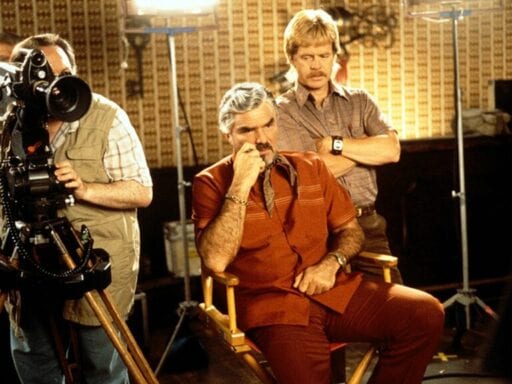 Burt Reynolds, who died on Thursday at the age of 82, was a box-office machine, a movie star, a sex symbol, and a gifted actor. It’s hard to think of one role that best embodied Reynolds’s multi-hyphenate status; his talent and charisma combined to not only make him Hollywood’s top-grossing star from 1978 to 1982, but also one of the most celebrated actors of his generation.

In honor of Reynolds’s multifaceted and storied career, here are six performances that explain his legacy.

Burt Reynolds didn’t come out of nowhere when he burst into superstardom in John Boorman’s classic tale of wilderness survival. He had most notably starred for several seasons in a supporting role in the popular TV Western Gunsmoke. But it was Deliverance that pushed Reynolds to the world-dominating stardom he enjoyed for the rest of the 1970s and the early 1980s.

In the film — a big hit that was nominated for Best Picture at the Oscars — Reynolds plays an experienced outdoorsman who embarks on a canoeing trip through rural Georgia with some friends, only to see a peaceful weekend descend into hell after locals decide to seek revenge on another member of the party who mocked them. By the time the weekend is over, Lewis will have committed murder, been injured, and seen a friend die.

Reynolds’s swagger made Lewis the most magnetic character in the movie, even though Jon Voight was technically the lead character and Lewis spends much of the film’s second half hobbled by a broken leg. It was as potent a launch to superstardom as an actor could have asked for. —Todd VanDerWerff

In many ways, the role Reynolds is most well-known for is also the one that typifies his career and his public persona. Smokey and the Bandit’s languorous but snarky down-home rebel “Bandit” Darville epitomized the kind of cheekily regressive sub-strain of ’70s machismo that Reynolds would embody for most of his life.

Directed by Reynold’s lifelong pal, stunt legend Hal Needham, Smokey and the Bandit paints fast cars, fast quips, fast punches, and a steady supply of drunken carousing as a sort of remodeled redneck American dream. As Bandit puts it in the above clip, he’s ready to do his dangerous long-haul booze run out of the same principles that Reynolds himself would apply to most of his real-life decision-making: “for the good old American life, for the money, for the glory — and for the fun.” —Aja Romano

The Cannonball Run has a well-earned reputation as glossy, exploitative trash (the New York Times, being kind, called it “inoffensive and sometimes funny”; Roger Ebert called it “an abdication of artistic responsibility at the lowest possible level of ambition”). But it features Reynolds, playing a good ol’ boy street racer, at perhaps the most perfect distillation of his Reynolds-osity. His brand of self-consciously beautiful, self-consciously virile masculinity is so heightened and so laced with irony as to become a burlesque long before he dons drag. —Constance Grady

By the late 1980s, Reynolds’s star had dimmed considerably. His brand of smirking heroism had been shoved aside by muscle-bound action stars of the era, like Sylvester Stallone and Arnold Schwarzenegger, and he also had a knack for choosing exactly the wrong roles. He turned down a supporting part in Terms of Endearment that later won Jack Nicholson an Oscar, and he also turned down the lead role in Die Hard, which made Bruce Willis the heir apparent to Reynolds’s “regular guy who gets out of crazy scrapes” screen persona.

After a brief run of trying things that weren’t in his wheelhouse (including a musical and several straight rom-coms), Reynolds turned to television, first providing the voice of an alien for the fantasy comedy Out of This World (which somehow ran four years) and then starring as a private eye on the one-season series B.L. Stryker.

But it was this CBS sitcom that won Reynolds an Emmy and actually garnered an audience. Set in the small town of Evening Shade, Arkansas, the series is middling when it comes to the quality of its actual jokes, but Reynolds attracted a top-flight cast, including everybody from Charles Durning to Marilu Henner to Ossie Davis.

(The show’s cancellation is also worth noting, as it was still a relatively high-rated series when it ended, coming in at number 27 in the year-end Nielsen rankings for its fourth season. However, at the time, Reynolds was embroiled in a divorce from actress Loni Anderson, which played out in the tabloids and may have led either to Reynolds requesting the show’s end or the network not wanting to be so closely tied to an ongoing publicity maelstrom. Regardless, Evening Shade ended before its ratings would have suggested it should.) —TV

But Reynolds himself said in 2015 that he had never seen the film, and he spoke candidly about how he and the film’s director, Paul Thomas Anderson, did not get along. Reynolds won the 1998 Golden Globe for Best Supporting Actor for his performance as Horner, but he lost the Best Supporting Actor Oscar to Robin Williams, who won for Good Will Hunting. —Alex Abad-Santos

Post-Boogie Nights, Reynolds never quite regained his status as a major star — or even a consistently interesting supporting player — but he was called upon frequently to inject a little Burt Reynolds magic into a variety of projects.

That may be why the most fitting role to revisit from Reynolds’s last decade of work is this guest appearance in “The Man from Jupiter,” a season-three episode of the animated series Archer, in which he plays himself. (Reynolds did a lot of that on TV — on The X-Files, he ostensibly played God, but the role was written in the script for “Burt.”) When the titular super-spy meets Reynolds, he can’t help but geek out, even as the two are forced to get to the bottom of a criminal conspiracy in a storyline packed full of references to Reynolds’s biggest hits.

Is it Reynolds’s best work? Nah. Does it embrace the rapscallion’s wink that made him such a major star? Oh, you bet. —TV

The Filipino neighborhood San Francisco destroyed
20 years after Columbine, the guns are still the problem
Trump is still using racist terms to describe the coronavirus. That has real consequences for Asian ...
Just 3 states meet these basic criteria to reopen and stay safe
Exclusive: Goldman warns clients about a rise in hostile takeovers amid coronavirus market meltdown
Ocasio-Cortez invites the US women’s soccer team to the House of Representatives