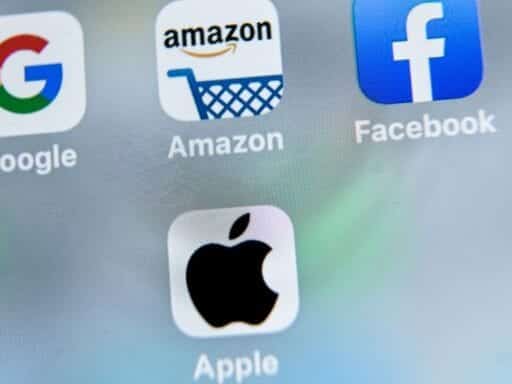 Share
Loading...
Increasingly, the four Big Tech companies have come under antitrust scrutiny in the US. | DENIS CHARLET/AFP via Getty Images

As antitrust investigations into Amazon, Apple, Google, and Facebook ramp up, execs from Sonos, PopSockets, and Tile testified before Congress.

Big Tech has a target on its back. Right now in the US, there are multiple, simultaneous government investigations focused on the business practices of each of the four Big Tech giants — Amazon, Apple, Google, and Facebook — that could someday lead to the breakup of these companies or major changes in how they operate.

It’s easy to get lost in all the antitrust talk because of the complexity of antitrust laws in this country and the fact that most specific complaints about Big Tech companies happen behind closed doors.

But last week, top executives from four smaller, competing companies — the wireless speaker company Sonos, the cellphone grip maker PopSockets, the gadget startup Tile, and the business software company Basecamp — laid out their complaints at a public hearing before the House of Representatives Antitrust Subcommittee.

These testimonies could provide guideposts for the ongoing investigations into the Big Four as regulators and lawmakers consider whether the tech giants have broken current laws or if the US’s antitrust laws need a modern makeover.

Sonos CEO Patrick Spence accused companies like Google and Amazon of using their success in one industry (for Google, internet search; for Amazon, online commerce) to dominate another: namely voice-controlled speakers.

The CEO’s accusation is that Google and Amazon are able to sell their Home and Echo speakers at artificially low prices — he used the term “predatory pricing” — because they make money in other ways, and so their goal isn’t to profit from the speakers. Instead, it’s to use their speakers to collect consumer data that they make money off of through their other business lines.

And once these tech giants drive competitors who can’t match their prices out of business, “prices are sure to go up,” he claimed. Sonos recently filed a lawsuit against Google for allegedly infringing on five of its patents, but its complaints obviously go beyond stealing technology.

A Google spokesperson said in a statement, “Sonos has made misleading statements about our history of working together. Our technology and devices were designed independently. We deny their claims vigorously, and will be defending against them.”

An Amazon spokesperson said, “Our focus is on building the best possible experience for our customers and partners building with Alexa. In fact, The Alexa flywheel is helping to generate billions of dollars for the Alexa developer and device maker community.”

Spence described negotiations with tech giants as increasingly “take it or leave it” interactions. In one case, he referenced Google’s unwillingness to allow Sonos speakers to let customers toggle between voice assistants — whether Google Assistant or Alexa — on a given Sonos speaker even though Sonos had built technology that supported the capability. More than half of all online product searches in the US now happen on Amazon, so Google could be incentivized not to allow the same thing to happen when it comes to out-loud searches.

Spence claims that Google said it would cut off Google Assistant integrations with Sonos if Sonos allowed customers to toggle between different assistants. And speaker makers increasingly need to support the voice assistant technologies from Amazon and Google to keep up with consumer expectations. “We can’t offer that, which is, in my opinion, really reducing freedom of choice,” he said.

A Google spokesperson referred Recode to its previous statement above about Sonos.

Likewise, PopSockets CEO David Barnett cited the “power asymmetry” that allows Amazon to still be successful while allegedly taking part in what he calls corporate “bullying.” He accused the giant of levying threats against his phone accessory company when making business demands that went above and beyond written contracts between the two companies. Recode covered the standoff between the two companies a year ago.

An Amazon spokesperson said in a statement, “PopSockets has been a valued retail vendor at Amazon and also supplies its products directly to other major retailers. We sought to continue working with PopSockets as a vendor to ensure that we could provide competitive prices, availability, broad selection and fast delivery for those products to our customers. Like any brand, however, PopSockets is free to choose which retailers it supplies and chose to stop selling directly through Amazon.”

Sonos recently sued Google for allegedly violating five Sonos patents, and said it would have sued Amazon over similar issues but could not afford the risk of taking on both companies at once.

Spence accused the companies of knowingly violating patents — they do a “cost benefit analysis,” he claimed — because they expect to capture such a large part of the market before they might have to pay up in a lawsuit, that whatever costs they’ll have to pay will be worth it.

Google denied the accusations and referred Recode to its statement above. In a statement, Amazon said, “The Echo family of devices and our multi-room music technology were developed independently by Amazon.”

Monopoly rent, in this instance, is the idea that a company without competition can charge higher-than-market-rate prices or can charge extra fees simply because of its unmatched position. For David Heinemeier Hansson, the co-founder and chief technology officer at the small business software company Basecamp, one complaint is the fact that Google allows Basecamp competitors to pay Google to appear as the first listing in search results when someone searches for “Basecamp.”

Google has “replaced that search engine with an ad engine instead,” he said, and consumers “are not being presented with what they’re actually looking for.”

“It’s a complete shakedown,” he added.

A Google spokesperson provided Recode a statement that read: “For trademarked terms like the name of a business, our policy balances the interest of both users and advertisers. Like other platforms, we allow competitors to bid on trademarked terms because it offers users more choice when they are searching. However, if a trademark owner files a complaint, we will block competitors from using their business name in the actual ad text.”

In an episode of Vox Media’s Land of the Giants podcast titled “Is Amazon Too Big? We Ask Its Sellers,” a top executive from the luggage maker Samsonite articulated a similar complaint about Amazon, which allows advertisers to buy top placement in query results on its site when a shopper searches for a competitor’s product. That means if you search “Samsonite luggage” on Amazon, the first results you see could be for another brand’s luggage for sale on the site.

Hansson also criticized Apple for the 30 percent cut it levies on app makers who want to charge their customers through the app.

“They have a 30 percent market advantage right from the get-go,” he said, insinuating that Apple should charge app makers closer to the 2 percent to 3 percent fees that payment processors do. “It’s completely outrageous.”

An Apple spokesperson sent Recode a statement, which read in part, “[W]e created the App Store with two goals in mind: that it be a safe and trusted place for customers to discover and download apps, and a great business opportunity for all developers. We continually work with developers and take their feedback on how to help protect user privacy while also providing the tools developers need to make the best app experiences.”

5) Tech giants are both participants in and owners of their platforms, and so they tilt the playing field in their direction

Tile is a startup that makes small Bluetooth trackers that can help users find things like a lost wallet, keys, or phone. To work, the trackers need to be paired with an app on a smartphone or tablet. But Tile’s general counsel, Kirsten Daru, argued at the hearing that Tile’s business has been hurt by Apple giving special treatment to its own “Find My” tracking app.

Apple’s app comes preloaded on its gadgets, can’t be deleted, and asks for location-tracking permission during operating system setup, Daru said. On the other hand, Tile customers who use Apple’s latest iOS version have to go into the settings on their phone to grant “always on” location tracking permission to the app.

“Apple is acting as a gatekeeper … in ways that favor its own interests,” Daru alleged.

Daru compared Apple to a sports team that owns the ball, field, stadium, and league, and can change the rules at any point.

A statement from an Apple spokesperson read, in part: “When setting up a new device users can choose to turn on Location Services to help find a lost or misplaced device with Find My iPhone, an app that users have come to rely on since 2010. Customers have control over their location data, including the location of their device. If a user doesn’t want to enable these features, there’s a clear, easy to understand setting where they can choose exactly which location services they want enabled or disabled. … We’re currently working with developers interested in enabling the ‘Always Allow’ functionality to enable that feature at the time of set up in a future software update.”

Amazon has also come under fire for both being a gatekeeper that makes the rules and that also operates the Amazon Marketplace, where it competes with other merchants selling their products on Amazon.com. Amazon competes in two ways: as a traditional retailer, by buying name-brand products wholesale and reselling them alongside those items from these third-party merchants; and, in some cases, Amazon makes and sells its own products under its own brand names, and competes with other brands and sellers.

Barnett, of PopSockets, claimed to Congress members at the hearing that Amazon itself has been the seller of counterfeit PopSocket products. He alleged that the problem went away only after PopSockets began spending more money on marketing on Amazon.

An Amazon spokesperson said that Amazon “strictly prohibits” the sale of counterfeit goods and denied that Amazon bases IP enforcement on payments of any kind, including spending on marketing.

According to a 2019 eMarketer report, Facebook and Google account for a combined 60 percent of the US online advertising market, thanks in large part to all the data they collect about how their users browse and search online.

Heinemeier Hansson, of Basecamp, argued that “you cannot opt out of this data collection” if you want to use large swaths of the internet today. His big proposal for balancing the playing field and restoring more consumer privacy online: He wants to ban advertising that is targeted to online users based on the dossiers that Facebook and Google build for marketers, which could simultaneously lower the tech giants’ appetite for data collection while potentially improving competition in the advertising industry.

An extraordinary turn of events

On one hand, it’s worth keeping in mind that all of the above accusations are still just that — accusations — and ones made from business leaders whose businesses might prosper more easily in a world where these giants were less powerful.

On the other hand, these allegations, made under oath and in front of members of Congress, mark an extraordinary turn of events for the tech giants who just a few years ago seemed invincible and unstoppable.

And perhaps most importantly, it appears that Congress will continue to take the claims seriously as they decide what recommendations to make to antitrust regulators and whether to attempt to remake antitrust law.

The Supreme Court showdown over LGBTQ discrimination, explained
The siren song of Starbucks
Mobsters, Teamsters, history, guilt, and salvation: Martin Scorsese’s terrific The Irishman
David French and I debate polarization, secession, and the filibuster
Netflix’s Shirkers is a punk feminist documentary gem
Democrats have finally struck a deal with the White House on a coronavirus package