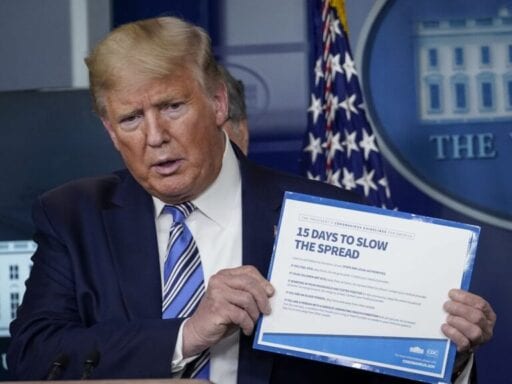 Share
Loading...
President Donald Trump speaks at a daily coronavirus briefing at the White House on March 23, 2020, touting his “15-day challenge” to get the public to social distance. | Drew Angerer/Getty Images

Trump wants to send American back to work in a matter of weeks, despite efforts to curb the spread of coronavirus.

President Donald Trump is getting impatient with the coronavirus.

At his daily briefing on Monday, Trump started talking about getting Americans back to work — eight days into his “15 day challenge” to get the public to social distance.

“This is not a country that was built for this. It was not built to be shut down,” Trump said. “America will, again, and soon, be open for business. Very soon. A lot sooner than three or four months that somebody was suggesting. Lot sooner. We cannot let the cure be worse than the problem itself.”

Trump’s daily press conferences have shifted in tone almost daily: Early on, he seemed skeptical of the severity of the situation, then he pivoted to calling himself a “wartime president,” and now he seems antsy to return to normalcy — so much so he’s dismissing his own health advisors’ advice and talking longingly about treatments as if they were ready for mainstream use.

In just one briefing, Trump gave at least six reasons that would make anyone following the coronavirus wary of his judgment.

When asked during the press conference about whether he’s listening to his health advisors on whether that’s the best course, he responded:

“If it were up to the doctors, they’d say let’s shutdown the entire world because again you’re up to 150 countries,” Trump said. “And when we shut it down that would be wonderful and let’s keep it shut for a couple of years. You can’t do that to a country, especially the No. 1 economy in the world by far.”

No doctor has gone this far. It’s a strawman argument to support Trump’s rejection of health experts’ recommendations as over the top.

However, many experts have said that to effectively “flatten the curve” of daily new infections, social distancing should last months to over a year. That’s how long it could take to develop and distribute a vaccine or establish herd immunity without severely overwhelming health systems.

Deborah Birx, the response coordinator for the White House Coronavirus Task Force, did not rule out a three- to four-month shutdown in certain parts of the country. She said that the pandemic has progressed much more quickly in Washington state, which is about two weeks ahead of New York state in terms of the increase in the rate of new infections.

2) Trump is primarily concerned about the economy

Trump has been preoccupied by the economic impact of coronavirus — which, to be fair, has already been catastrophic. The stock market has had the fastest 30 percent sell-off ever and industries from airlines to restaurants are pleading for bailouts. It could plunge the US into a depression and leave many workers unemployed.

Trump has promised publicly that the stock market will bounce back once the crisis passed, but privately, he has reportedly expressed anger that warnings from Centers for Disease Control and Prevention officials have scared the markets.

Trump has tried to tie his hopes for the economy to his 2020 reelection prospects. As my colleague Aaron Rupar writes:

On Monday, the president followed up on his previous-night’s tweet by retweeting a number of accounts with sketchy handles like @steph93065 that urged him to get people back to work — not only for the sake of the economy, but for his reelection hopes as well.

“15 days. Then we isolate the high risk groups and the rest of us get back to work before it’s all over for everyone!! #Landslide2020,” wrote @FedupMil in a post that was retweeted by the president.

Officials will have to reckon with the tradeoffs of reopening the economy and slowing the spread of the virus through social distancing at some point. But most public health experts say that it’s simply premature to talk about returning to normalcy in a few weeks.

Trump continues to tout hydroxychloroquine, a common anti-malaria drug, coupled with the antibiotic azithromycin, also known as “Z-Pak,” as a potential treatment for the virus despite the fact that it hasn’t been tested and could have adverse side effects.

“At my direction, the federal government is working to help obtain large quantities of chloroquine,” he said. “We think tomorrow, pretty early, the hydroxychloroquine and the Z-Pak I think is a combination is looking very, very good and it’s going to be distributed.”

Anthony Fauci, the director of the National Institute of Allergy and Infectious Diseases at the National Institutes of Health, has previously said that he has no data to rely on that the drug is safe for people who’ve tested positive for coronavirus, nor any data that proves it is effective.

Meanwhile, Americans appear to be listening to Trump. BuzzFeed reports that a man died after self-medicating with a fish tank treatment related to the drug. Other reports suggest there’s a run on the drug itself, with some even crossing the border to buy it from Mexican pharmacies, making it harder for people who need it to access it.

4) Trump thinks coronavirus is like the flu or car accidents

For weeks, Trump has tried to claim that the coronavirus is like the flu, and he returned to that on Monday:

“We have a very bad flu season, on top of everything else,” he said. “It’s very bad. It looks like it could be over 50,000 [deaths]. And certainly, this [pandemic] is going to be bad. And we’re trying to make it so that it’s much, much less bad.”

But coronavirus is far more contagious — and more deadly. Here’s one chart that explains the difference.

“You look at automobile accidents, which are far greater than any numbers we’re talking about,” he said. “That doesn’t mean we’re going to tell everybody, ‘No more driving of cars.’”

The car accident comparison has come up before: On Friday, Fauci criticized the idea, calling it “false equivalence.” Then, at least, Trump seemed to agree with Fauci, saying, “You could be talking about millions of lives.”

Trump might want to send workers back to work, but it’s really not up to him.

Trump can’t unilaterally reopen the economy — that power lies with states and localities, many of which have imposed “shelter in place” policies that have resulted in the closure of non-essential businesses where people typically congregate, such as bars and restaurants. In hotspots of infection and areas where the rate of new daily infections hasn’t yet peaked, that could mean social distancing could prevail for much longer than just a few weeks.

But Trump can advise states to reopen for business as usual, and at least some of them will likely heed his advice, despite what medical professionals may say. Lifting the social distancing restrictions prematurely could place vulnerable populations at risk by allowing the virus to spread too quickly and overwhelming the resources of the medical system, leading to preventable deaths.

6) Trump claims a recession is more deadly than the virus

Trump has been claiming for days that the economy would improve after the virus has been controlled. But on Sunday night, he changed tack, suggesting on Twitter that the economic toll of sending workers home could have a more devastating effect than letting the virus rip through the US population unchecked by social distancing:

WE CANNOT LET THE CURE BE WORSE THAN THE PROBLEM ITSELF. AT THE END OF THE 15 DAY PERIOD, WE WILL MAKE A DECISION AS TO WHICH WAY WE WANT TO GO!

He reiterated that argument during his press conference on Monday, claiming that stifling the economy could be deadly in and of itself.

“We have people with tremendous anxiety and depression, and you have suicides over things like this when you have terrible economies,” he said. “[Death] would be in far greater numbers than the numbers we’re talking about with regard to the virus.”

The toll that isolation takes on people is real. So is the toll of unemployment — one reason Congress is considering a relief package. Studies have found that suicide rates do increase during economic downturns.

But it’s not clear what, if anything, backed up Trump’s assertion that social distancing would be more deadly. It’s true that the suicide rate jumped during the Great Recession from 2008 to 2010, but not in the kind of numbers that would outpace the projected death toll of coronavirus. Roughly 10,000 suicides were traced to the recession. In the worst-case scenarios without social distancing, coronavirus would kill millions. And research suggests recessions may lower death rates.

The advice from public health experts remains the same: practice good hygiene and social distancing, refrain from traveling and consult a medical provider if you develop symptoms of Covid-19. Scientists estimate this could be our new normal for a year or more.

The virus is primarily spread through droplets from coughing or sneezing. The CDC consequently recommends that people wash their hands often with soap and water for at least 20 seconds, disinfect frequently touched objects and avoid touching their face, where the virus can enter through the eyes, nose and mouth.

People should also avoid face-to-face interactions with people outside of their households. Many states have already adopted “shelter in place” policies that have shutdown all but essential businesses. But this kind of social distancing even extends to small gatherings of friends and going for walks at popular times of day.

If you do develop symptoms, which typically include a fever and coughing, then you should contact a healthcare provider, who may recommend that you self-treat at home or that you be tested for the virus (though there remains a shortage of available testing kits.)