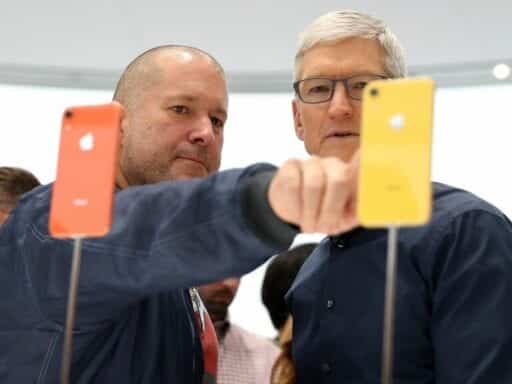 Apple hosted its annual September hardware event in the Steve Jobs Theater of its new Cupertino, California, headquarters on Wednesday. Please never forget that this multibillion-dollar office park looks like an eyeball-shaped spaceship, and please catch up here on all of the announcements you may have missed if you didn’t have the ability to live-stream a two-hour keynote at your workplace.

The company has an established rhythm of making big changes one year, then iterating on them with a slightly less flashy launch the following. Last year was the big one, featuring the iPhone X, and this year is the tweak year (the “S” year), featuring the iPhone XS. Apple is mostly just refining technology it introduced last September. But there are still a few things to take note of, even for the average consumer.

Here are six big-ish things to know about, listed from most to least important.

Rumors that the iPhone home button would die were correct

As predicted, none of the three phones Apple announced today have the iPhone’s hallmark home button. This was also the case with last year’s iPhone X, but that phone was introduced alongside other options that still had the feature — which has been part of the phone since its introduction in 2007. So it’s gone.

As discussed earlier this week, it’s kind of a bummer to watch Apple get rid of features that have served the average consumer perfectly well for a full decade, primarily in favor of pushing incrementally larger screen displays and inarguably innovative but arguably obnoxious new features that aren’t especially popular.

We’ll all have to adjust to using swipe navigation instead of force-closing apps, which is supposedly bad anyway. We’ll also have to get used to unlocking our phones with Face ID instead of Touch ID, the privacy concerns of which you can read plenty about.

Not only do this year’s new phones not have a headphone jack, but Apple will also stop shipping free headphone jack adaptors with new iPhones this year. They had been including the hideous adaptor dongle with new phones as a courtesy ever since the first headphone jack-less phone — the iPhone 7 — launched in September 2016. No more.

Apple also discontinued every iPhone with a headphone jack currently available in stores, so you can literally never buy one again. Maybe if you ran out right now before every Apple Store manager has had a chance to read their email, but who knows.

There’s a new, slimmer Apple Watch that can perform EKGs

The fourth-generation Apple Watch was announced with an objectively hilarious and very dramatic hype reel. The song in the background is called “Supernova,” and it’s by a Minneapolis band called the Hand. The Hand!

Anyway, what you need to know about this watch is that it has a slightly bigger display than its predecessor, has undergone some aesthetic updates (more photos here), and, most importantly, has gained some interesting new health features.

For one, it can detect when you’ve fallen or slipped and contact emergency services if you don’t disable them (or move your body) within one minute. It can also take an electrocardiogram — a wild new feature that Apple says has already gotten approval from the Food and Drug Administration. This was followed by a 10-second ovation directed at a black screen that read “FDA” on it in plain white text. Apple also had a representative from the American Heart Association discuss the prevalence of heart disease onstage, following up the data with praise for the ease of the EKG feature.

It’s actually a pretty big deal, marking the first time that EKG results have ever been made available directly to a patient/consumer. It also blurs the line a bit between the concept of being a patient and being a consumer, which is a conversation for another day.

The new watch starts at $399; preorders start Friday and will ship on September 21.

There are two new $1,000 flagship phones

The first two phones Apple announced are the XS and the XS Max. The XS is an updated version of last year’s iPhone X, with the most notable consumer-facing change being that you can order it in gold. Cool! It also has some upgrades, including better water resistance, better sound, and fine-tuned Face ID.

The iPhone XS Max is the exact same phone except enormous. It has a 6.5-inch screen and is the biggest phone Apple has ever made. As The Verge points out, it’s also bigger than almost all other phones that exist, including one of its main competitors in the space: the Samsung Galaxy Note 9, which has a 6.4-inch screen.

Colorful iPhones are back

The third phone announced was the iPhone XR, which is more or less identical to the XS except it’s a little cheaper, starting at $749. The cost cut comes from the fact that the body is made of aluminum instead of stainless steel and the screen is LCD instead of OLED. The fun comes from the fact that you can order it in black, white, blue, coral, yellow, or red — a range of choices that hasn’t been available since the plastic-bodied iPhone 5C launched in September 2013, which is also when you had to look at those disturbing public transit ads and billboards every day for what felt like 100 years.

Preorders for the iPhone XR start October 19, and phones will ship October 26. Don’t set up a new phone right before Halloween, in my opinion — that’s just inviting something spooky to happen — but your life is totally up to you!

The Verge has hands-on photos here.

You can search Apple Music by lyric fragment now?

Apple Music got a bunch of minor updates tied to the release of iOS 12, most notably a feature that lets you search for a song by typing in any lyric fragment. So, for example, you can jot down whatever isolated phrases you remember from the soundtrack at your cool teen cousin’s birthday party, and then find the songs they come from, add them to a playlist, and pretend you always knew.

This is transparently a move to one-up Spotify’s Genius integration, which lets you listen to a song while you read its lyrics and production history, as well as whatever ridiculous and delightful factoids Genius users have deemed relevant.

And that’s all you missed! Don’t worry, everyone was wearing the same muted cornflower blue button-downs they do every year.

Why Mike Bloomberg plans to spend $100 million boosting Biden in Florida
“The woman in Michigan”: How Gretchen Whitmer became a target of rightwing hate
Vox Sentences: Moon 2024
She lost her son to addiction, then lost her house to save her daughter
Trump says he won’t commit to leaving office if he loses the election because of a “ballot scam”
The G7 is getting back together this weekend