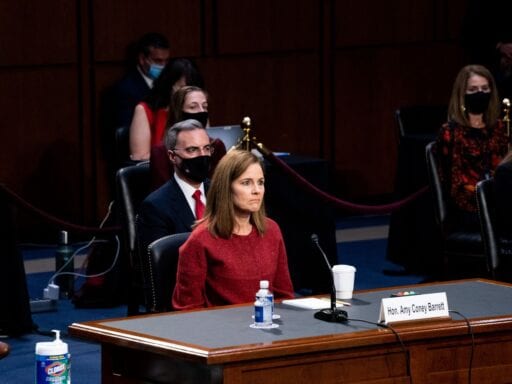 Barrett said that Roe is not a “super-precedent” and dodged questions on health care.

Judge Amy Coney Barrett spent much of the first day of questions in her confirmation hearing invoking what’s known as the “Ginsburg rule” and refusing to provide a position on whether she agreed with past precedents. It’s an approach made famous by the late Justice Ruth Bader Ginsburg (though she actually spoke much more freely on some subjects) — and it provides little additional insight regarding Barrett’s positions on issues including reproductive rights and the Affordable Care Act (ACA).

Barrett did, however, comment more broadly. She noted that she was not “hostile” to the ACA, despite criticizing past decisions that upheld the law. She also said repeatedly that she did not have an “agenda” to overturn Planned Parenthood v. Casey, a 1992 decision that reaffirmed someone’s right to an abortion, though her past opinions signal an openness to limiting these rights.

“I’ve made no commitment to anyone about how I would decide any case,” Barrett emphasized, noting that President Donald Trump and his staffers had not discussed how she’d rule on specific cases — a concern many Democrats have highlighted given his previously stated promises to appoint anti-abortion nominees and judges who’d overturn the ACA.

Barrett also noted repeatedly that she adhered to the late Supreme Court Justice Antonin Scalia’s judicial philosophy of originalism, but emphasized that she’d bring her own perspective to the role. “If I were confirmed, you’d be getting Justice Barrett, not Justice Scalia,” she said.

Here are six of the key moments from the confirmation hearing so far.

Congress, not the president, would have to pass a law to delay an election, but Barrett declined to make this point when she was asked about the subject.

As Vox’s Aaron Rupar wrote, when Barrett was pressed directly about the president’s power to delay an election, she punted, indicating that she was unwilling to take a straightforward position on the question.

“If that question ever came before me, I’d need to hear arguments from the litigants and read briefs and consult with my law clerks and talk to my colleagues and go through the opinion-writing process,” she said. “So, you know, if I give off-the-cuff answers, then I would be basically a legal pundit, and I don’t think we want judges to be legal pundits. I think we want judges to approach cases thoughtfully and with an open mind.”

When asked whether she’d recuse herself on cases reviewing the outcome of the upcoming election or the preservation of the Affordable Care Act, Barrett said she wouldn’t be able to commit to such a move at this point.

“That’s not a question I can answer in the abstract,” Barrett said when pressed about whether she’d participate in the upcoming November case about the ACA. Senate Minority Leader Chuck Schumer has previously argued that Barrett should recuse herself from the case because of her criticisms of past decisions preserving the law — and because of Trump’s comments about picking judges who’d undo it.

Similarly, when Sen. Patrick Leahy (D-VT) probed a possible conflict of interest, Barrett wouldn’t agree to recuse herself if a case related to the election were before the Court. In Leahy’s exchange with Barrett, Leahy wondered whether Trump could be choosing someone for the Court who would favor his position if a case about the election’s outcome came before it.

“I commit to you to fully and faithfully apply the law of recusal,” Barrett said. “I can’t offer a legal conclusion right now about the outcome of the decision I would reach.”

“I would certainly hope that all members of this committee would have confidence in my integrity than to think that I would allow myself to be used as a pawn to decide this election for the American people,” she later emphasized.

Barrett was asked repeatedly whether she believed that Roe was wrongly decided, like Scalia did, and she dodged the question several times — citing the same reasoning that other nominees have in the past.

“I’m going to invoke Justice Kagan’s description, which I think is perfectly put,” she said, “She said that she was not going to grade precedent or give it a thumbs-up or a thumbs-down.”

In Planned Parenthood v. Box (2019), Barrett joined a brief dissent arguing that her court should rehear a case that blocked an anti-abortion law before that law took effect. That opinion argued that “preventing a state statute from taking effect is a judicial act of extraordinary gravity in our federal structure” — suggesting that Barrett would have prevented her court from blocking the anti-abortion law at the heart of that case if given the chance.

“I don’t have an agenda. I have no agenda to try to overrule Casey,” Barrett said.

In an exchange with Sen. Amy Klobuchar (D-MN), she also declined to classify Roe v. Wade as a “super-precedent” like Brown v. Board of Education. The term “super-precedent” refers to court decisions that Barrett described as settled to the degree “that no political actors push further overruling.”

“Roe is not a super-precedent,” she said. “But that does not mean it should be overruled.”

The impending ACA case was another area where Barrett declined to provide more specifics. “The canons of judicial conduct would prevent me from expressing a view,” she said, when pressed on her perspective about the arguments involved.

Barrett in the past has criticized Justice John Roberts’s reasoning for upholding the ACA in NFIB v. Sebelius in 2012, though she argued that this pushback did not mean she was broadly “hostile” toward the law itself.

The relationship between Barrett’s religious views and potential judicial decisions was a focus of Barrett’s 2017 confirmation hearing for the Seventh Circuit Court, though it has not been raised by Democrats to the same degree during this year’s panel. This is in part because of how some lawmakers botched the subject last time, making it seem as though they were attacking her faith and not its connection to her role as a judge.

Barrett is a devout Catholic, and she’s previously written about how a judge’s Catholic faith could impact their approach to cases involving capital punishment. On Tuesday, Barrett said she’d continue to set aside her Catholic beliefs, and her broader personal beliefs, while making judicial decisions — and emphasized the process she would take to interpret the law.

“Judges can’t just wake up one day and say, ‘I have an agenda. I like guns, I hate guns. I like abortion, I hate abortion,’ and walk in like a royal queen and impose their will on the world,” she said. “You have to wait for cases and controversies, which is the language of the Constitution, to wind their way through the process.”

Barrett declined, too, to offer her stance on Obergefell v. Hodges, a 2015 case that guaranteed same-sex couples the right to marry, noting that she didn’t expect a challenge to make it to the Supreme Court. While describing her position on protections for the LGBTQ community, however, she used the term “sexual preference,” which prompted outcry from many LGBTQ rights organizations who noted that “sexual orientation” is the correct term.

“The term ‘sexual preference’ is used by opponents of equality to suggest that being #LGBTQ is a choice,” Lambda Legal, a legal advocacy group, noted in a tweet.

Sen. Mazie Hirono (D-HI) later confronted Barrett about her use of the term, prompting her to issue an apology. “I would never mean to use a term that would cause offense in the LGBTQ community,” Barrett said. “So if I did, I greatly apologize for that.”

Sen. Cory Booker pressed Barrett about the presence of implicit racial bias in the criminal justice system — something that Vice President Mike Pence dismissed in a recent debate.

Reading off data points, including one that described how prosecutors were more likely to charge Black defendants with offenses that carry harsh mandatory minimum sentences than white defendants in comparable cases, Booker asked if the data surprised Barrett.

Booker focused on the subject as part of a series of questions he asked Barrett about racial justice, including an opinion she had written in a prior case about a hostile work environment.

Barrett said she’d seen studies about bias and eventually acknowledged its existence in a somewhat roundabout way. “It would be hard to imagine a criminal justice system as big as ours without having any implicit bias in it,” she said.

People have donated millions to fight the Amazon fires. Will the money help?
Why did it take so long for Les Moonves to leave CBS?
The new Mueller indictments should definitively put the Seth Rich conspiracy to rest
The US postpones a military deal amid concerns about stays at a Scottish Trump resort
SNL brings back Alec Baldwin’s Donald Trump to give the Covid-19 graduation speech no one wanted
3 charts explain how the US got lucky with coronavirus — and why things still look bad