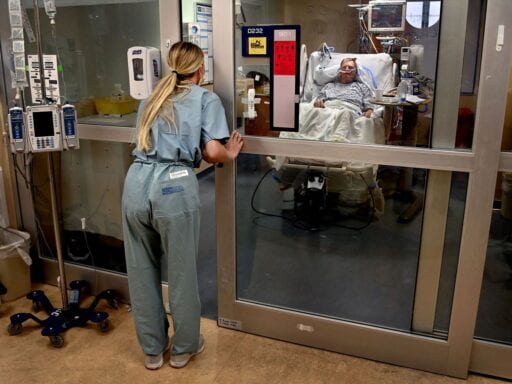 The US was warned.

The United States has reached a new terrible milestone in the Covid-19 pandemic. This past week, the country saw, on average, 75,561 new cases per day — the highest on record in a pandemic full of atrocious records. On Thursday, 89,000 Americans received a positive test result.

From north to south, east to west, the virus is spreading uncontrolled again. This is not a peak. We’re in the midst of a climb. Next week, we can expect yet another record: leaping from more than 9 million total cases to 10 million cases in a matter of a few days.

The number of people in hospitals across the country is ascending, too, hitting 46,000 on Thursday. And this will likely be followed by rising numbers of deaths in the coming weeks.

Why? Because this is the pattern we’ve seen in every Covid-19 surge during the pandemic. It’s not going to change now. There’s a momentum to this virus.

Cases incubate silently for days in a human body, and it can take several days for a person to be tested, and more to find out the results. Next week’s record number of cases is already festering in the population now, waiting to be uncovered. All the while, the infected can continue spreading this very contagious virus exponentially, especially in places that don’t have mask mandates or restrictions on bars and restaurants being open for indoor dining.

Yet the disconnect between this grim reality and President Donald Trump’s words has never been greater. The president wants the public to believe the recent spikes are something of a mirage, based solely on expanded testing.

“We’re rounding the turn,” Trump told his supports at a rally on Monday. “Our numbers are incredible.”

A rise in Covid-19 cases means we’ll see a spike in hospitalization. Again.

While part of the increase in cases can indeed be explained by more testing, that’s far from the whole story. Look no further than the test-positive rate to understand why. The national rate has climbed more than a percentage point over the past two weeks, reaching 6.3 percent. That average obscures far higher test positive rates in states with some of the worst-controlled outbreaks:

This means a growing number of Americans being tested have the virus — and health officials aren’t keeping up with the rising demand for testing, nor are they keeping on top of outbreaks.

Covid-19 hospitalizations are also rising again, following a sharp drop through August and early September. Over the past month, the number of US patients in hospitals with the disease increased by more than 50 percent, according to the COVID Tracking Project, surpassing 46,000 on October 29.

As Vox’s Dylan Scott reports, this has already forced radical measures across the country: Wisconsin and Texas are building field hospitals; Idaho is planning to transfer patients out of state; Utah is ready to ration care.

“Although we are not yet close to the hospitalization peaks of almost 60,000 that we observed in the spring and summer,” the editors at the Covid Tracking Project observed, “the average number of people hospitalized this week rose to 42,621, a very substantial increase from the lows of about 30,000 that we saw just a month ago.”

If cases keep rising — as they’re expected to with the cold weather and more indoor gathering — this means we’re on track for a new hospitalization record. And, again, that will be followed by a new surge in deaths.

.@IHME_UW now projects 399,000 #COVID19 cumulative deaths by February 1. If states do not react to rising
numbers by re-imposing mandates, cumulative deaths could reach 514,000 by the same date. pic.twitter.com/3XoIV9YOt7

People with the disease are more likely to survive today. But the gains doctors have made treating critically ill patients could rapidly be undone as hospital wards become overwhelmed again.

“Each hospital’s overwhelmed point is different now than it was in April, but there is a point that’s too much for any hospital,” Theodore Iwashyna, a professor of critical care medicine at the University of Michigan who has been treating Covid-19 patients, told Vox. “There are only so many hands. You can only be in so many rooms.”

This was not a surprise, nor was it inevitable

What makes this moment so frustrating is that researchers and health officials have been warning for months that a fall and winter spike in Covid-19 cases was looming.

“There’s a possibility that the assault of the virus on our nation next winter will actually be even more difficult than the one we just went through,” Centers for Disease Control and Prevention Director Robert Redfield told the Washington Post in April. “And when I’ve said this to others, they kind of put their head back, they don’t understand what I mean.”

We were warned, as early as March, that there would be no going back to normal life until community transmission of the virus had been suppressed. We were warned that any successes achieved through business closures and social distancing would have to be replaced by equally effective public health measures if we were to take steps toward returning to life as normal. In many parts of the country, those alternative strategies never came.

Scientists also told us that we’d be living with the pandemic for potentially years without a vaccine. That’s still true.

In May, we were warned that state reopenings were coming too soon, and that case spikes, and later hospitalizations and deaths, would follow. And they did.

Over the summer, we were warned that falling temperatures in the autumn, along with continued lax precautions, might lead to another surge. And here we are.

Yet earlier this month, as it became more apparent that the United States was on track for a major increase in Covid-19 cases, states like Florida were relaxing restrictions, allowing bars and restaurants to reopen for indoor patrons. (A similar pattern emerged this summer as cities and states relaxed restrictions even as cases were rising, fueling a spike in new infections in June.)

The current rise in cases is starting from a much higher baseline, with the added element of increased transmission in winter conditions. As people spend more time indoors in the cold weather, and as lower humidity makes it easier to transmit a respiratory virus, the air is fertile for viral spread. That means the next Covid-19 surge could break more records.

Scientists say it didn’t have to be this way. “Through comparative analysis and applying proportional mortality rates, we estimate that at least 130,000 deaths and perhaps as many as 210,000 could have been avoided with earlier policy interventions and more robust federal coordination and leadership,” researchers at Columbia University reported this month.

Other parts of the world have also done a far better job of containing the spread of the virus. Officials in Taiwan reported this week that the island has gone 200 days without local transmission of Covid-19. South Korea, which confirmed its first Covid-19 case on the same day as the US, managed to keep its per capita infections far lower throughout the pandemic. Even with a recent rise in cases, South Korea’s infection rate remains much lower. The country also reported that its economy is even starting to grow.

These countries maintained much more aggressive restrictions on movement, while investing far more in testing for Covid-19 and tracing contacts of the infected. They also embraced mandatory face masks.

These lessons have been repeatedly emphasized throughout the pandemic, in the US and around the world. But these are lessons the US has still failed to learn. America is still struggling with basic pandemic control measures like social distancing. And now, with the days getting shorter, the country is facing the darkest stretch of the pandemic yet.

Vox Sentences: Disarray down under
Sen. Thom Tillis holds off Democratic challenger in North Carolina, a crucial win for Republicans
Storm Area 51 weekend had neither raids nor aliens. But it wasn’t a bust.
Republicans’ threat to call Hunter Biden as an impeachment witness, explained
White House anti-socialism report inadvertently makes a case for single-payer
How TV paved America’s road to Trump