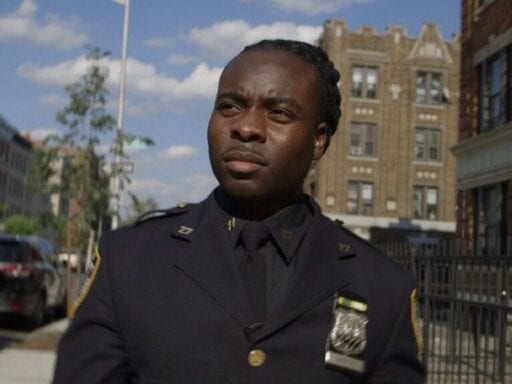 The US’s system of policing, criminal justice, and incarceration didn’t just come from nowhere. And to change it, we have to understand it.

The American criminal justice system — policing, prosecution, the courts, and incarceration — didn’t just spring out of nowhere. The institutions tasked with keeping order are the products of a long series of choices and policies. And behind those choices and policies are specific ways of thinking about who deserves justice, who is guilty, and what the purpose of laws even are, all of which derive from America’s past.

If you are looking to better understand the history that led to what you see on the news today — police brutality, punitive and unequal meting out of justice, demonstrable racial prejudice, and a broken prison system — then these seven films and two TV series are a great place to start. Through fiction and nonfiction, they help show how complex the interlocking problems are and point toward where true change might begin.

Necessary, searing, and engaging, 13th — from Selma director Ava DuVernay — is a primer on the historical context and moral urgency behind a lot of today’s most pressing public issues, from mass incarceration and the war on drugs to police brutality and private prisons. It also thoroughly explores the dovetailing motivations behind the Black Lives Matter movement. The documentary is a compelling whirlwind tour through America’s long history of racism and, perhaps more importantly, America’s long history of denying its racism, and the ways that its denial has affected the country’s justice system.

How to watch it: 13th is streaming on Netflix and on YouTube.

Bernadine Williams (Alfre Woodard) has spent years working as a warden at a maximum-security prison, and it’s clearly been wearing on her health, her marriage, and her soul. She sees the most important part of her work as caring for the inmates and quietly supporting them as they approach their execution dates. But then a lethal injection goes awry and as the date for the next one approaches, she finds herself reaching a breaking point. With Clemency, director Chinonye Chukwu crafts a heavy, deliberate film, with rich, widely framed shots and dark colors that make the emotional toll on not just Williams but also her coworkers, their families, the inmates, and the inmates’ loved ones extra clear. Anchored by an absolutely stunning performance from Woodard, it’s an unusual way to expose the injustices of the capital punishment system without forgetting the individuals who are stuck in its gears.

How to watch it: Clemency is available to digitally rent or purchase on iTunes, Amazon, YouTube, Google Play, and Vudu.

The practice of policing based on quotas — requiring officers to arrest a minimum number of people within a particular time frame — was outlawed in New York City in 2010. Such requirements, opponents argued, turned police officers away from serving the community and finding ways to dispel violence before it happens. Instead, officers would end up making arrests just to hit their numbers. And those arrests often happened disproportionately in low-income minority communities. But outlawing quotas didn’t make them go away. Using interviews, secretly recorded conversations, and other footage shot from 2014 to 2017, Stephen Maing’s documentary Crime + Punishment explores the NYPD’s ongoing but concealed use of quotas and their effects on the citizens of New York — and officers in the police department, too. The resulting work is important for everyone who cares about America’s systems of policing — especially because the NYPD’s system is a template for police forces across the country.

How to watch it: Crime + Punishment is streaming on Hulu.

In The Force, documentarian Peter Nicks spends two years following the embattled Oakland Police Department, which was put under federal supervision in 2003 after a wave of misconduct and other public offenses. The film starts out seeming hopeful, but it soon becomes clear that the Oakland PD’s situation is extraordinarily complicated and that any possible solutions will be wildly complex. It makes a clear (and devastating) case that broken institutions can’t be reformed from within; instead, fixing them requires a difficult counterbalancing culture shift from the outside. The Force powerfully lays out some possibilities for policing reform that put the power back in the hands of communities.

How to watch it: The Force is streaming on Netflix. It’s also available to digitally rent or purchase on iTunes, Amazon, YouTube, Google Play, and Vudu.

The Innocence Project, founded in 1992 by law professors Barry Scheck and Peter Neufeld, is devoted to overturning wrongful convictions by using DNA evidence to free innocent prisoners while also advocating for reform in the criminal justice system. Netflix’s The Innocence Files tells the stories of some of the people they’ve helped free. Across nine documentary episodes — some of which are as long as a feature film — The Innocence Files draws on the same intriguing cases that often become the subjects of true-crime series while illustrating the breakdown of supposedly just systems and the unreliability of allegedly unimpeachable evidence. It’s among the strongest documentary series about criminal justice I’ve ever seen.

How to watch it: The Innocence Files is streaming on Netflix.

The American practice of capital punishment is inextricably linked to much of what’s wrong with our justice system: its focus on punitive rather than restorative measures; its indisputable bias against the poor, mentally ill, and marginalized; its captivity to racial bias. That’s precisely what Just Mercy, a true story that will set viewers’ sense of injustice ablaze, aims to change. Based on Bryan Stevenson’s bestselling 2014 memoir of the same name, Just Mercy tells the story of Stevenson’s early career as an attorney working to reverse wrongful convictions in Alabama and details the founding of his organization, the Equal Justice Initiative. Just Mercy isn’t just about the death penalty; it’s also about how old attitudes toward the poor and toward black Americans, in particular, have played out in the American justice system. Shifting how we think about capital punishment will shift the way we think about what the justice system is supposed to do.

How to watch it: Just Mercy is available to digitally rent or purchase on iTunes, Amazon, YouTube, Google Play, and Vudu.

Brett Story’s documentary about the way prison systems reshape the landscapes around them is remarkable for many reasons, but one of them is the simple fact that we don’t see a prison until the end of the film. Instead, The Prison in 12 Landscapes captures a series of vignettes in communities that are shaped in some way by a nearby prison, from conversations with people at historical societies to narration from prisoners who fight fires for a few bucks a day. The film plays out like both poetry and a negative-space portrait — what’s left unsaid is just as important as what’s said out loud. And it interrogates whether the prison system does what it says it wants to do or whether it has a different aim altogether.

How to watch it: The Prison in 12 Landscapes is available to stream in its entirety on Vimeo. It’s also available to digitally rent or purchase from Amazon.

Ava DuVernay (Selma, 13th) co-wrote and directed all four episodes of this miniseries about the infamous case of the Central Park Five, in which five boys ages 14 to 16 — none of whom were white — were coerced into confessing to raping a jogger named Trisha Meili in 1989, then convicted of the crime in 1990. Niecy Nash, Michael K. Williams, John Leguizamo, Vera Farmiga, Felicity Huffman, and many others round out the extensive cast. It’s a true crime series with interlocking crimes. Part of the series is concerned with discerning what really happened to Meili, but the rest considers the crime committed against the five young men. In When They See Us, the criminal justice system is more committed to politics than the truth — and what drives it is plain, old-fashioned American racism.

How to watch it: When They See Us is streaming on Netflix.

The co-directors of Whose Streets? are Damon Davis and Sabaah Folayan, who were on the inside of the protests following the 2014 killing of 18-year-old Mike Brown and the birth of the Black Lives Matter movement. It’s a raw, potent film pieced together from footage and interviews, and it’s unabashed about its perspective and connection to the activists. The film opened in theaters in 2017 just as a white supremacist march began to unfold in Charlottesville, Virginia, and it’s no less relevant today. It’s an essential piece of historical documentation that cries out to be seen — and heeded.

How to watch it: Whose Streets? is streaming on Hulu. It’s also available to digitally rent or purchase on iTunes, Amazon, YouTube, Google Play, and Vudu.

Domestic terrorism is on the rise. Why won’t cable news networks say so?
Dopamine fasting is Silicon Valley’s hot new trend. Is it backed by science?
Obama’s HBCU commencement speech doubles as an indictment of the Trump era
What we know about Biden’s inauguration plans
ICE tried to fine immigrants living in sanctuary churches. Now, it’s backing down.
What it’s like to have a baby during the coronavirus pandemic