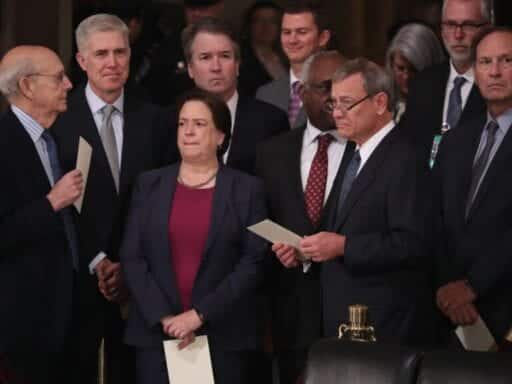 If you want to understand what the Supreme Court became in the last decade, consider a 2012 study by University of California, Irvine law professor Rick Hasen.

Between 1975 and 1990, Hasen found that Congress enacted “an average of twelve overrides of Supreme Court cases in each two-year Congressional term.” Between 2001 and 2012, by contrast, the number of overrides dwindled to a mere 2.8 per two-year term. (Hasen defines the term “override” broadly to include acts of Congress that “overturned, reversed, or modified a Supreme Court statutory interpretation holding.”)

As Congress has become more dysfunctional, the Supreme Court’s ruling has increasingly become the final word in American governance.

The 2010s revealed that America’s constitutional system is profoundly broken. Enacting significant legislation typically requires bipartisan cooperation, which means that either party can shut down progress simply by refusing to cooperate. Worse, the party that controls the White House tends to bear the blame for a dysfunctional Congress, even when the opposition party creates that dysfunction. As President Obama explained in a 2014 press conference, “people are going to ask for greater accountability and more responsibility from me than from anybody else in this town.”

The result is that the opposition party has every incentive to sabotage governance — because voters will tend to reward them for that sabotage. As Senate Republican Leader Mitch McConnell put it in 2010, when legislation is bipartisan, that tends “to convey to the public that this is okay, they must have figured it out.” For that reason, it was “absolutely critical” that every Republican vote against Obama’s biggest achievement.

Now that both parties understand this dynamic, congressional dysfunction is likely to be America’s new normal, which means that the Supreme Court will exercise more and more unchecked power.

And what has our increasingly conservative Supreme Court done with that power?

Below are nine cases that defined the last decade of American law. For the most part, these cases represent important and ongoing trends in the Court’s decisions. Decisions that are unlikely to survive under the Court’s current conservative majority, such as the abortion rights decision in Whole Woman’s Health v. Hellerstedt (2016) or the affirmative action decision in Fisher v. University of Texas (2016), did not make the list.

This is a list about the Supreme Court’s recent past, but it is not a nostalgic list. It is a list about how Republican justices are likely to wield their power in an age of legislative dysfunction. And it is a list that offers a warning to Democrats.

The Supreme Court spent the 2010s undercutting voting rights, weakening protections for workers and consumers, and granting bold new rights to Republican constituencies. This trend is likely to accelerate in the coming decade.

In Buckley v. Valeo (1976), the Supreme Court recognized that lawmakers must have some power to fight “corruption and the appearance of corruption” by regulating money in politics. Citizens United redefined the word “corruption” so narrowly as to render it meaningless. Under Citizens United’s definition of “corruption,” the wealthy may spend lavishly to elect candidates of their choice so long as they do not explicitly exchange “dollars for political favors.”

Beginning in the 1980s, the Supreme Court started to expand the Federal Arbitration Act of 1925 — a statute enacted to allow “merchants with relatively equal bargaining power” to agree to resolve disputes through arbitration — to allow businesses to force workers and consumers to sign away their right to sue as a condition of doing business with that company. These individuals were shunted into a privatized arbitration system that is more likely to rule in favor of corporate parties than real courts, and that typically awards less money to plaintiffs who do prevail.

Concepcion held that forced arbitration agreements may also ban class actions — a mechanism that allows many people who were injured by the same company to join together in a single lawsuit against that company. Concepcion reached this holding, moreover, despite the fact that the Federal Arbitration Act says nothing whatsoever about class actions.

This decision matters because it effectively grants impunity to companies that cheat many people out of a relatively small sum of money. If a company refuses to pay a thousand of its workers $1,000 in wages, for example, the company walks away with a cool $1 million. The workers, meanwhile, are unlikely to sue because the cost of hiring a lawyer will exceed the $1,000 in losses.

At the time, NFIB was largely perceived as a victory for President Obama — the Supreme Court decided not to repeal Obamacare, over the strident objection of four of its Republican members. Yet NFIB also allowed states to opt out of the Affordable Care Act’s Medicaid expansion without consequence. As a result, an estimated 4.4 million uninsured non-elderly Americans are not eligible for Medicaid.

The human cost of NFIB is staggering. According to a working paper published by the National Bureau of Economic Research, “about 4,800 fewer deaths occurred annually in expansion states, adding up to 19,200 deaths averted between 2014 and 2017. By comparison, in states that didn’t expand Medicaid there were 15,600 additional deaths during the same period.”

“Our country has changed,” a triumphant Chief Justice John Roberts wrote for his Court in Shelby County. “The ‘pervasive,’ ‘flagrant,’ ‘widespread,’ and ‘rampant’” racial voter discrimination that Congress addressed in the Voting Rights Act of 1965 no longer existed. So there was no longer a need for the “extraordinary measures” employed by the fully operational Voting Rights Act — a requirement that states and localities with a history of voter discrimination “preclear” any new voting rules with officials in Washington, DC. America, according to Shelby County, was no longer racist enough to justify such measures.

Just over three years later, Donald Trump became the president of the United States — a victory driven in part by racial resentment.

Before Hobby Lobby the general rule in religious liberty cases was that religion could not be wielded to diminish the rights of others. Believers could often seek exemptions from laws that regulated their own conduct, such as if they wanted to use an otherwise illegal drug in a religious ceremony.

But, as the Court explained in United States v. Lee (1982), “when followers of a particular sect enter into commercial activity as a matter of choice, the limits they accept on their own conduct as a matter of conscience and faith are not to be superimposed on the statutory schemes which are binding on others in that activity.”

Hobby Lobby held, for the first time, that the rights of religious believers could trump the rights of others. The specific holding of Hobby Lobby was that certain business owners who object to many forms of birth control could refuse to cover those forms of contraception in their employees’ health plans. And the Court is likely to hold in the future that religion may be used to undercut other rights — including, potentially, the right not to be fired because of your gender or sexual orientation.

King is another case that, at the time, appeared to be a victory for President Obama. The case involved a fairly spurious claim that the Affordable Care Act must be read to sabotage many of its own marketplaces. Six justices rejected this attempt to sabotage Obamacare.

In retrospect, however, the most important line in King was a brief aside where Chief Justice Roberts explained that courts should be reluctant to let federal agencies decide questions of “deep ‘economic and political significance’” that are “central” to a “statutory scheme.” This line foreshadowed a broader effort to strip federal agencies of much of the regulatory power delegated to them by Congress — including the power to implement crucial environmental legislation such as the Clear Air Act and the Clean Water Act.

Indeed, there appear to be five votes on the Supreme Court right now to give the judiciary a veto power over all federal regulatory action.

Obergefell, the Supreme Court’s landmark marriage equality decision, arguably does not belong on this list for the same reason that liberal victories in Whole Woman’s Health and Fisher were not included. Obergefell was a 5-4 decision. Justice Kennedy, who provided the key fifth vote, is gone. Will the Court’s current majority allow Obergefell to stand?

Notably, when the Supreme Court considered a follow-up case to Obergefell in 2017, only three members of the Court publicly dissented. That doesn’t mean that Obergefell is safe. But it does suggest that the right to marry a person of the same sex may stand on somewhat firmer ground than the right to an abortion.

Unions typically must represent everyone in a bargaining unit, regardless of whether each individual worker joins the union. That creates a “free-rider” problem. Because workers gain the higher wages and benefits typically associated with unionizing, regardless of whether they pay union dues, workers reluctant to join have an incentive to take all these benefits without contributing to the union that makes those benefits possible. If too many workers do that, the union may lack the resources it needs to survive — and then no one will enjoy the benefits of being in a union.

Janus held that contracts between a union and a government employer cannot solve this problem by requiring non-members to reimburse the union for the services that union provides those non-members. As a practical matter, this is a direct attack on public sector unions’ finances. It’s also likely to skew elections toward Republicans. A 2018 study found that when a state enacts a law protecting non-member free riders — what’s often referred to as a “right-to-work” law by anti-union activists — such laws cause “the Democratic vote share to drop by 3.5 percent.”

As a presidential candidate, Donald Trump promised a “total and complete shutdown of Muslims entering the United States until our country’s representatives can figure out what is going on.” He later admitted that he’d try to cloak this ban in an effort to prevent people from certain parts of the globe from entering the United States. “People were so upset when I used the word Muslim,” Trump said in 2016, “and I’m okay with that, because I’m talking territory instead of Muslim.” In Trump v. Hawaii, the Supreme Court considered Trump’s third attempt to ban travel from several majority Muslim nations, and the Supreme Court upheld it.

Roberts’s majority opinion is a monument to credulity. “The President concluded that it was necessary to impose entry restrictions on nationals of countries that do not share adequate information for an informed entry determination, or that otherwise present national security risks,” Roberts claims.

In dissent, Justice Sonia Sotomayor catalogs many statements Trump made “alluding to a desire to keep Muslims out of the country,” and she compared the majority’s decision to the Court’s infamous Japanese detention decision in Korematsu v. United States (1944). Just as in Korematsu, Sotomayor warned, Trump v. Hawaii “blindly accept[s] the Government’s misguided invitation to sanction a discriminatory policy motivated by animosity toward a disfavored group, all in the name of a superficial claim of national security.”

Vox Sentences: Turkey to US: “No power can stop us”
5 winners and 9 losers from Game of Thrones’ series finale
Will Trump be impeached and removed from office, or face the 25th Amendment?
The weird hegemony of “birthday cake” flavor
Vox Sentences: Turkey continues its slow slide toward authoritarianism
Bernie Sanders is leading the two most important states on Super Tuesday