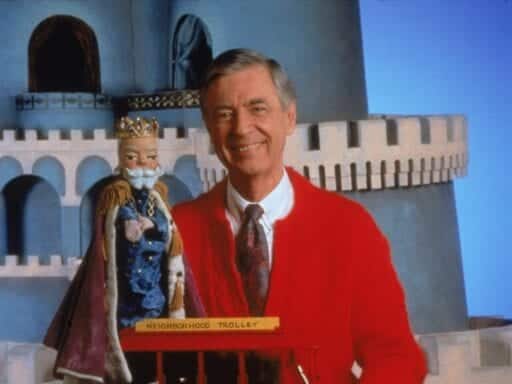 The very first episode of Mister Rogers’ Neighborhood was taped 51 years ago. Here’s the beloved TV host on love, peace, and why you’re special.

I’ve written at length about the wonders of Mister Rogers’ Neighborhood and Rogers’s tireless advocacy for the idea that television could be used to reach children and make them feel special, to make them feel okay. But he didn’t just appeal to kids. There was something about his direct, kind approach that spoke to adults as well. (Consider the way Joan Rivers found herself unexpectedly moved during an appearance by Rogers on The Tonight Show.)

Rogers understood that on some level all any of us wants is to know that we’re okay. And because he was so good at seeming to believe everybody was, indeed, okay, he could connect with our need for empathy and hope.

A Presbyterian minister born on March 20, 1928, the late Rogers was a real argument for the good that religion can do in the world when it lives up to its best possible self. But he never really played up this side of his personality, choosing instead to work on boosting the self-esteem of the kids who watched his show. (After his death, he was called — jokingly, but as part of a larger segment about how his notions had harmed kids’ work ethics — an “evil man” by the hosts of Fox and Friends because of this.)

Sadly, Mister Rogers’ Neighborhood is no longer on the air, but 50 years after its debut, Rogers’s legacy lives on, in the form of clips and full episodes available on streaming (currently on Amazon Prime). Go back and watch a few, especially if you’re having a rough, frustrating day. You’ll be surprised at how involving the show is, how peaceful and serene. There’s never been anything else like it in the history of television, and there likely won’t ever be again.

But Rogers left us with lots and lots of quotes summing up his core philosophies. I’ve collected nine of my favorites below.

Unless otherwise noted, all quotes are from 1995’s You Are Special and 2003’s The World According to Mister Rogers. The latter, in particular, is a great read, as is 1996’s Dear Mister Rogers, a collection of children’s letters to the host.

Mister Rogers on why he likes you

When I say it’s you I like, I’m talking about that part of you that knows that life is far more than anything you can ever see or hear or touch. That deep part of you that allows you to stand for those things without which humankind cannot survive. Love that conquers hate, peace that rises triumphant over war, and justice that proves more powerful than greed.

“It’s You I Like” is, next to the Mister Rogers Neighborhood theme song, probably the most famous tune Rogers ever composed for the show. It’s also the one that reduces Rivers to tears in the clip above.

Mister Rogers on where to turn during tragedy

When I was a boy and I would see scary things in the news, my mother would say to me, “Look for the helpers. You will always find people who are helping.”

Though Rogers was deeply religious, he never attempted to argue that tragedy was part of God’s plan for the world or anything similar. Instead, he aimed to keep our eyes turned toward the good things humanity is capable of, which are often in much greater evidence than the bad.

Love isn’t a state of perfect caring. It is an active noun like “struggle.” To love someone is to strive to accept that person exactly the way he or she is, right here and now.

By far the most important aspect of Rogers’s philosophy is the idea that you have to work to keep loving and caring about someone. It’s not a thing that happens once and then ceases. It’s a constant, lifelong process.

Mister Rogers on caring for others around you

If you could only sense how important you are to the lives of those you meet; how important you can be to the people you may never even dream of. There is something of yourself that you leave at every meeting with another person.

A lot of what Rogers talks about in his books and on his TV show sounds very much like the so-called Golden Rule: Do unto others as you would have them do unto you.

We live in a world in which we need to share responsibility. It’s easy to say “It’s not my child, not my community, not my world, not my problem.” Then there are those who see the need and respond. I consider those people my heroes. [Source.]

Rogers believed deeply that other people’s problems were also, on some level, his problems. He was careful to take the time to meet with as many fans as possible when he was out in public. For more on this, read this beautiful profile of the man by Tom Junod.

The concept of hope was incredibly important to Rogers, who spent many an episode of his show trying to help children see past the big, scary thing right in front of them, be it divorce or the bathtub drain, in favor of what might be coming down the line.

Peace means far more than the opposite of war.

Solitude is different from loneliness, and it doesn’t have to be a lonely kind of thing.

Most episodes of Mister Rogers’ Neighborhood open with long sequences where it’s just him, talking directly to the camera, in a very calm, soft, still voice. They project a sense of tranquility that feels a little dreamlike, which is probably why the show was so successful. Most of today’s kids’ TV blasts you; Rogers understood that kids also like to be soothed now and then.

I believe that human beings are God’s vessels of mystery and beauty. [Source]

Though Rogers maintained a deep, unwavering Christian faith, he was most interested in the expression of the divine through the most mundane thing imaginable — other human beings.

Notably, Rogers was a vegetarian who kept to a strict diet and never drank or smoked. He also refused to condemn homosexuality, even when doing so would have been more in line with the American mainstream, because he felt everybody was, in some way, a reflection of God.

I have struggled, throughout my life, with belief, but the times when I’ve seen the best evidence for something divine haven’t involved sunsets or other miraculous natural displays. No, they’ve been moments where humans are kind to other humans, even when they don’t need to be, when people go out of their way to help, even when there’s no reason. Is that because I watched a lot of Mister Rogers’ Neighborhood growing up? I don’t know — but I like to think it might be.

What one pastor’s anti-Nike protest says about religion and nationalism in America
Two of the year’s best movies are now on Netflix
Bernie Sanders wants to put credit reporting companies like Equifax out of business
Vox Sentences: Leviathan, or Mudcarp
The worst idea of 2020
How to run a successful impeachment hearing