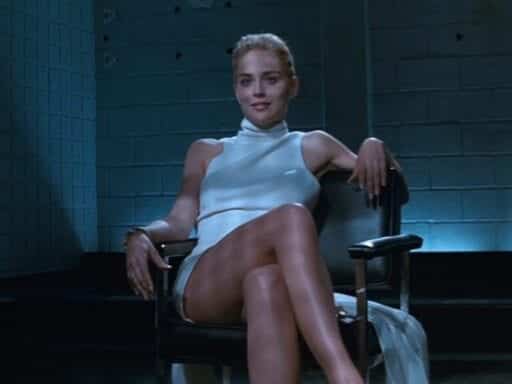 Like a moth to a flame, detective Nick Curran, played by Michael Douglas, weaves through a San Francisco nightclub in the 1992 film Basic Instinct; he’s in pursuit of his most recent murder suspect, crime novelist and blonde knockout Catherine Tramell, played by Sharon Stone. He discovers her in a glittering bronze minidress, snorting cocaine on a toilet, her girlfriend draped across her lap. Just as he reaches the stall, she smiles roguishly, then extends one endless limb and slams the door with her foot.

In the 1980s and ’90s, erotic thrillers enticed panting movie audiences across the country. In 1987, Fatal Attraction — in which a woman terrorizes a married man after a one-night stand — grossed more than $320 million worldwide and was nominated for six Academy Awards, including Best Actress, Best Picture, and Best Director. A few years later, Basic Instinct — the story of a homicide detective who begins a lurid affair with a homicide suspect — pulled in more than $352 million, as well as two Oscar nominations. (For context, the drama Scent of a Woman, the chronicle of a scholarship prep school student and his blind and crotchety retired Army officer charge, earned only $134 million.)

Some months ago, I dived headlong into a ’90s erotic thriller binge. I was new to the genre: Born in the mid-’80s, I was too young to be introduced to carnal tour de forces like Fatal Attraction and Basic Instinct in their heyday, and I typically avoid watching physical violence. But suddenly, I could hardly be convinced to watch anything else. Though well aware that this male-conceived genre served as a vehicle to tell horror stories of female independence, I was nonetheless entranced by these women who seemed so unburdened by emotion; it was the sort of disposition to which I could never relate, and never will.

I watched Sharon Stone as Catherine Tramell smirk and smoke from behind the folds of her sandy cashmere as she thwarts Nick and his even more hapless partner. I watched The Last Seduction’s Bridget Gregory — a glamorously bitchy Linda Fiorentino — purr to her lover, “You’re my designated fuck,” before tepidly slapping him on the cheek. I watched Bound’s Violet, played by Jennifer Tilly, and Corky, Gina Gershon, eyeing one another in the elevator like wild cats. Like the exploitable men who were little more than marks for these women, I was lured in by the femme fatale who perceived the world as either a vehicle for personal opportunity or nothing at all.

It’s clear to me now that I was looking for a different kind of woman — different, that is, from me. I was nearly finished with my first book on the long literary and cultural legacy of women stigmatized for feeling too much, for sobbing in movie theaters and for chattering too loudly and for expressing excitement when it’s considered uncool to do so.

And all the while, I was grieving, am still grieving, my mother, who had died in November 2017. Although my emotional life has always been characterized by surging highs and lows, after feeling so keenly for so long, I had finally reached my saturation point. This is what drew me to erotic thrillers: the unselfconscious, debauched frigidity of the femme fatale. Her primary object is to dupe men with outsized notions of their own intelligence. Meanwhile, I’m too often paralyzed by a fear of my own ineffectiveness, and, moreover, my sense of moral conviction. Trying to live honestly precludes so many indulgences. I might be unnerved by the femme fatale’s savagery, but I marvel at her ego, at her certainty that she deserves everything she wants. I yearn for what I imagine she feels in the thick of her exploits: ferocious, sharp, powerful.

I love these movies, but ambivalently. The femmes fatales of the late 20th century flagrantly embody male anxieties over women’s burgeoning financial and professional independence. They are, without question, stereotypes of power-mad, murderous women that simultaneously gratify male viewers’ yearning for smut. But still, I found myself exulting in the unfettered independence and dominance that made these women, in their creators’ estimations, so wretched.

As both the erotic thriller and its parent, 1940s film noir, argue, even the femme fatale’s more mundane preferences should be interpreted as unwomanly. She does not procreate — “I hate rugrats,” Catherine Tramell remarks. Her body is a tool of manipulation. To Die For’s Susanne Stone, played by Nicole Kidman, is repulsed by the notion of pregnancy and by any suggestion that she should prioritize motherhood over beauty and fame. In accordance with long misogynist tradition, the film frames this refusal to submit to pregnancy as a five-alarm signifier of wickedness. After all, these women don’t forge ties with their bodies or their hearts; on the contrary, they sever them through selfishness and, at last, through murder.

The femmes fatales of the ’80s and ’90s, meanwhile, were women’s liberation era nightmares: They were ambitious, they desired wealth, wanted sex, and rejected family and, in particular, men. When we first see Bridget Gregory in The Last Seduction, she’s at work, managing a room of male telemarketers; her chosen career, of course, is one grounded in mercenary hustling. She stalks around the office calling her employees “maggots” and “eunuchs.” Later, she heats a tray of store-bought cookies in the oven and presents them as homemade to the small-town private investigator hired by her husband to follow her. Wearing an apron and a winning smile, she thrives on men’s stale expectations. When Bridget ultimately commits murder by spraying mace down a man’s throat, her weapon of choice is no coincidence: The femme fatale prevails by turning lethal the tools of feminine susceptibility.

Despite myself, scenes like this render me a fangirl (for what it’s worth, the person Bridget kills is as abominable as she is). I savor the moment when Bound’s Violet aims a gun, stony-faced, and declares, “Caesar, you don’t know shit.” I’m probably too entranced by Catherine Tramell (although I reserve my right to covet her sensational wardrobe).

I wish these portrayals of strong women were not accompanied by such virulent sexism, racism, and homo- and transphobia. Certainly that need not be the case: 2016’s The Handmaiden, an adaptation of Sarah Waters’s Fingersmith, is one recent triumph of the genre, pairing the exhilaration of plot-driven intrigue with incandescent, queer female desire stunningly rendered by actresses Min-hee Kim and Tae-ri Kim.

So I continue to dwell, for a little while, in the coherence of Catherine Tramell’s and Bridget Gregory’s egotism. Lately, my habits have become predictable. I retreat when I am too aware of myself — of my grief, my anxiety, the memory of my mother, the thump of my bulky, weeping heart. Then I return to the heartbreaking world and I continue to care.

Rachel Vorona Cote is a writer living in Takoma Park, Maryland. She has contributed to Longreads, the New Republic, Literary Hub, Pitchfork, and many other venues. Her first book, Too Much: How Victorian Constraints Still Bind Women Today, is available for preorder. You can find her on Twitter.

How the Milwaukee Bucks kicked off a historic NBA protest
Daylight saving time begins Sunday: 8 things to know about “springing forward”
There are no good choices
Could this be Trump’s orange makeup?
Protesting during a pandemic is a risk. Many have decided it’s worth it.
Why Crazy Ex-Girlfriend’s series finale was so, so satisfying