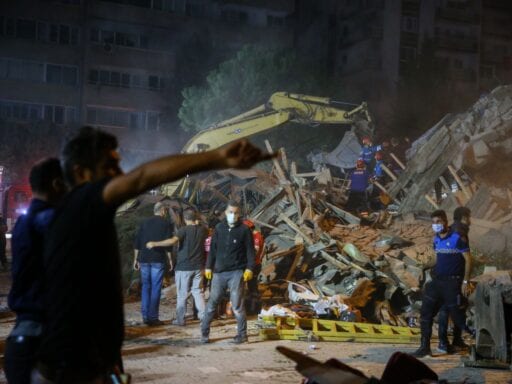 Turkey and Greece are located near many active fault lines.

The earthquake caused the most damage in Izmir, Turkey’s third-largest city, with a population of nearly 3 million people. More than 20 buildings collapsed, the city’s governor said, and at least 70 people had to be pulled from the rubble.

There were no reported injuries to the 100 US military personnel currently stationed in Izmir, a spokesperson for NATO Allied Land Command told the Military Times.

Videos posted to social media after the earthquake ended showed residents in the streets assessing the damage.

The extent of the wreckage seems commensurate with the size of the earthquake. According to the US Geological Survey, an agency that monitors seismic activity around the world in real time, the quake started six miles below ground and triggered extensive flooding in Izmir.

In an interview with local media outlet NTV, Izmir Mayor Ismail Yetiskin said sea levels had risen following the quake: “There seems to be a small tsunami.” A video posted by the Daily Sabah, a Turkish news agency, showed floodwaters in a town near Izmir washing away furniture and other debris.

VIDEO — A small-scale tsunami floods streets in the town of Sığacık in Izmir’s Seferihisar district after earthquakehttps://t.co/ZQDw7t0GU3 pic.twitter.com/Y21tXDMzDD

Turkey wasn’t the only nation hit. The impact of the earthquake was also felt in nearby Greece, where two teenagers lost their lives on the Greek island of Samos after a wall fell in on them. Samos was also inundated with flooding. Fortunately, it doesn’t look like the island or the country has suffered any further deaths.

Greek Prime Minister Kyriakos Mitsotakis called Turkish President Recep Tayyip Erdoğan to offer his condolences. “Whatever our differences” — a reference to Greece and Turkey’s decades-long history of conflict — “these are times when our people need to stand together,” he said.

I just called President @RTErdogan to offer my condolences for the tragic loss of life from the earthquake that struck both our countries. Whatever our differences, these are times when our people need to stand together.

Turkey and Greece are located on or near many active fault lines, so earthquakes are fairly common in the region. The area within 150 miles of where today’s quake struck has seen more than 29 earthquakes of a 6.0 or greater magnitude in the past 100 years.

Vox’s Umair Irfan has explained earthquakes can quickly arise on faults like these:

An earthquake occurs when massive blocks of the earth’s crust suddenly move past each other. These blocks, called tectonic plates, lie on top of the earth’s mantle, a layer that behaves like a very slow-moving liquid over millions of years.

That means tectonic plates jostle each other over time. They can also slide on top of each other, a phenomenon called subduction.

The places on the planet where one plate meets another are the most prone to earthquakes. The specific surfaces where parcels of earth slip past each other are called faults.

The most recent major earthquake to hit Turkey occurred in January in the country’s eastern province of Elzaig, killing more than 30 people. The last earthquake of a similar strength to today’s quake to hit Greece occurred in the Ionian Sea in October 2018, causing damage to buildings; no injuries were reported.

But while Turkey and Greece are unfortunately used to dealing with natural disasters, that doesn’t make Friday’s earthquake, or the recovery efforts still underway, any easier.

The pandemic is driving media consumption way up. But ad sales are falling apart.
Donald Trump finally just said it: he doesn’t care if Kavanaugh’s accuser is telling the truth
Joker: reviews and analysis of the year’s most controversial comic book movie
Climate and energy news in 2018 actually wasn’t all bad
White House counsel Don McGahn is worried Trump’s setting him up on obstruction — so he’s talking a ...
How some Black Americans are finding solace in African spirituality