A body double and a “rogue operation”: the latest in Jamal Khashoggi news 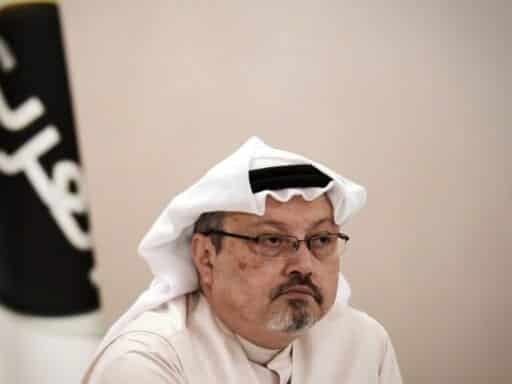 The Saudi narrative of the dissident journalist’s death has gotten more complicated.

The Saudi government said on Friday that dissident journalist Jamal Khashoggi was accidentally killed inside the Saudi consulate in Turkey at the hands of Saudi government officials during an altercation on October 2.

But the Saudi explanation has been met with extreme skepticism, including from Western allies and many US lawmakers. President Donald Trump, who’s waffled on his stance about Khashoggi’s death, accused the Saudi leaders of “deception” in an interview with the Washington Post over the weekend.

More information has also trickled out since Friday that calls into question the Saudi version of events. CNN aired a Turkish surveillance video that purports to show a body double wearing Khashoggi’s clothes and a fake beard leaving the Saudi consulate through the back door less than two hours after the journalist first entered the building.

And a Turkish newspaper also reported Monday that a member of Crown Prince Mohammed bin Salman’s entourage called MBS’s office from the consulate four times on the day of Khashoggi’s murder, suggesting that perhaps MBS may have had more information than he’s claiming.

Saudi officials continue to describe Khashoggi’s death as a “rogue operation” and a “tremendous mistake,” and Saudi Arabia’s King Salman and MBS confirmed Monday they made phone calls to Khashoggi’s son expressing their condolences. But the regime continues to face harsh international criticism — on Monday, the website of the Saudi investment conference dubbed “Davos in the Desert” was hacked.

Meanwhile the US response remains in diplomatic limbo: harsher words, but little action.

Here’s what to know about key developments in the case you may have missed over the weekend.

The Saudis may have tried to use a Khashoggi body double, according to surveillance footage

Turkish officials say one member of the Saudi crew implicated in Khashoggi’s death walked into the Saudi consulate — and came out dressed to look like Jamal Khashoggi.

CNN obtained surveillance footage that appears to show Mustafa al-Madani, a suspected Saudi intelligence official, exiting the consulate by the back door, wearing Khashoggi’s clothes, a fake beard, and glasses. However, Madani is still wearing the white-soled shoes he wore when he entered the consulate earlier that day. He is accompanied by a man in a hooded sweatshirt carrying a plastic bag.

According to information Turkish officials provided to CNN, the “body double” Madani and his accomplice go to the Blue Mosque in Istanbul’s Sultan Ahmet district, where the two men enter a bathroom. Madani emerges wearing his original outfit, and without the fake beard, according to CNN. The two men then throw out the plastic bag, which Turkish officials believe contain Khashoggi’s clothes.

The Washington Post reports that, according to “a diplomat familiar with the deliberations,” the body double was intended to corroborate the Saudi government’s initial story that Khashoggi walked out of the consulate. But that cover story fell apart, the source said, in part because of the different shoes. “It was a flawed body double, so it never became an official part of the Saudi government’s narrative,” the diplomat told the Post.

The existence of this potential body double also undermines Saudi Arabia’s story that this was merely a fight gone wrong, especially if someone brought along a fake beard.

Another report by a Turkish news outlet also complicates the Saudi narrative. Yeni Safak, a newspaper with ties to Turkey’s government, published a story Monday that said a Saudi official who travels with MBS made multiple phone calls to MBS’s office from the Saudi consulate in Turkey on the day of Khashoggi’s murder.

Maher Abdulaziz Mutreb, who’s traveled with MBS to the US and other places, called the head of MBS’s royal office four times. Yeni Safak also reported that Mutreb made one call to the US from the Saudi consulate in Turkey. The information hasn’t been corroborated, but the report again undermines the Saudi’s defense that Khashoggi died in a fistfight.

Meanwhile, the Saudi government keeps defending MBS, saying he was unaware of Khashoggi’s murder and that this a “rogue operation.”

Saudi Foreign Minister Adel al-Jubeir: “There obviously was a tremendous mistake made and what compounded the mistake was the attempt to try to cover up. That is unacceptable in any government.” https://t.co/ZNhIXzUPC9 pic.twitter.com/mdlZlNLpzn

“The individuals who did this did it outside the scope of their authority. There was obviously a tremendous mistake made and what compounded the mistake was the attempt to try to cover up. That is unacceptable in any government,” al-Jubeir said. “These things unfortunately happen. We want to make sure those who are responsible are punished.”

Baier pointed out that some of the Saudi officials implicated in Khashoggi’s death have close ties to MBS, and he called out the inconsistencies in the Saudi government’s story since October 2. Al-Jubeir responded by saying that a Saudi team in Turkey had discovered discrepancies in the initial report the Saudi officials filed, after which prosecutors launched the investigation.

This explanation still leaves many, many unanswered questions — but this is definitely the line the Saudi government is trying to stick to.

The US muddles through its Khashoggi response

Trump, in an interview with the Washington Post on Saturday, said “obviously there’s been deception, and there’s been lies” when it comes to Saudi Arabia’s story about Khashoggi’s death.

The president insisted that “something will take place” to punish those responsible, though he once again declared that it wouldn’t involve interrupting the $110 billion arms-sale agreement with Saudi Arabia.

The Washington Post also asked Trump about his son-in-law and adviser Jared Kushner, who has built a close relationship with the young Saudi leader. Kushner is working on Middle East peace, and he has worked closely with Saudi Arabia on this strategy.

But Trump made it sound as if Kushner and MBS are just two men who occasionally meet for social visits. “They’re two young guys. Jared doesn’t know him well or anything. They are just two young people. They are the same age. They like each other, I believe,” Trump told the Post.

Kushner’s relationship with MBS is a big deal, though. Kushner reportedly urged Trump to stand by the Saudi crown prince as he weathered this latest controversy, according to a New York Times story published on Thursday. And the Post, citing unnamed US officials, reports that Trump “has privately grimaced that his son-in-law Jared Kushner’s close relationship with the crown prince has become a liability and left the White House with no good options.”

Kushner himself had been publicly silent about the matter since the incident occurred two weeks ago, but on Monday, he finally broke his silence. In an interview with CNN’s Van Jones, Kushner said he advised MBS to be “fully transparent” because the “world is watching.”

Jones also asked Kushner whether MBS could actually be trusted to investigate. Kushner responded carefully: “We’re getting facts in from multiple places. Once those facts come in, the Secretary of State will work with our national security team to help us determine what we want to believe, and what we think is credible, and what he think is not credible.”

Jones pressed Kushner, even bringing up Trump’s comment about deception and lies. Kushner dodged, saying he dealt with deception all the time.

“We have our eyes wide open,” Kushner said. “Again, the president is focused on what’s good for America, what are our strategic interests, where do we share interests with other countries, let’s work toward those. Every day we deal with people are trying to deceive us in different ways, but our job is to see through it, but also stay focused on what’s best for the American people.”

CNN’s Van Jones: “Do you trust the Saudis to investigate themselves?”

Jared Kushner: “We’re getting facts in from multiple places. Once those facts come in, the Secretary of State will work with our national security team to help us determine what we want to believe” #CITIZENCNN pic.twitter.com/JW8MDkHl3J

Kushner’s response, along with Trump’s, show that the administration is trying hard to balance managing the outrage over Khashoggi’s death with protecting what it perceives as its core interests. While it’s very unlikely that Khashoggi’s death will break up the partnership between Washington and Riyadh, the mixed messages from the US are bolstering the Saudi’s bizarre narrative about Khashoggi.

This is perhaps best personified by US Treasury Secretary Steve Mnuchin, who cancelled his appearance at a Saudi investment conference dubbed “Davos in the Desert” last week — but is still going to meet with Saudi officials about the economic issues, including upcoming Iran sanctions. Mnuchin is touring multiple countries in the region, according to a spokesman.

But Mnuchin ended up meeting with MBS himself, despite the criticism the Treasury Secretary faced ahead of the trip. The Saudi government posted Monday a picture of the two men, noting “the importance of Saudi-US strategic partnership.”

#CrownPrince meets with the U.S. Secretary of the Treasury and stresses the importance of Saudi-US strategic partnership, where it holds an important role in the future in line with the Kingdom’s #Vision2030 pic.twitter.com/5LyloSOMTK

In the wake of Khashoggi’s death, prominent business leaders, investors, and world diplomats have pulled out of Saudi Arabia’s Future Investment Initiative, a conference featuring world, tech, and business leaders that had been dubbed “Davos in the Desert.”

The exodus from this conference is a big deal: Saudi Arabia is trying to present itself as a modern state open to investment, and this conference was basically intended to be its big “coming out party.” But the constant trickle of high-profile investors pulling out of the conference over the Khashoggi affair has become a major source of embarrassment for the country, which is scrambling to save face.

And on Monday, just one day before the conference was scheduled to start, someone or someones decided to up the ante: they hacked the event’s official website, putting a photoshopped ISIS propaganda-style illustration of MBS on the verge of beheading Khashoggi on the site’s main landing page.

Underneath the image, a statement calls on “countries to put sanction on the Saudi regime.”

“The regime, aligned with the United States, must be kept responsible for its barbaric and inhuman action, such as killing its own citizen Jamal Khashoggi and thousands of innocent people in Yemen,” the message read. “The medieval Saudi regime is one of the sources for #Terrorism_Financing in the world.”

The website has since been taken down. But it’s just one more sign that Khashoggi’s murder isn’t going to quietly disappear.

Update: This post has been updated with news about Mnuchin’s meeting with MBS.

“Give me a fucking break”: What Melania Trump said about the blowback against family separations
The Good Place settles into a new status quo in “The Ballad of Donkey Doug”
The House passed a bipartisan bill that could legalize 325,000 unauthorized immigrants
Clearview AI, the world’s scariest facial recognition company, can’t even keep its own data secure
Jim Jordan’s allies are questioning the premise of the Ohio State sexual abuse allegations
Quarantine is giving us the opportunity to judge celebrity bookshelves