A border guard shot and killed a Mexican boy. The Supreme Court will decide if he gets off scot-free. 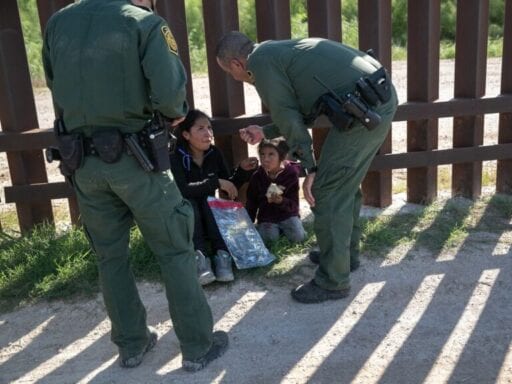 Share
Loading...
US Border Patrol agents speak with a mother and daughter from Ecuador next to the border fence after detaining them on September 10, 2019, in Penitas, Texas. | John Moore/Getty Images

Hernández v. Mesa is one of the Trumpiest cases ever to reach the justices.

The facts of Hernández v. Mesa are simply horrific.

Sergio Hernández, a 15-year-old Mexican boy, was playing at the United States-Mexico border near El Paso, Texas. Just inside of the American side of this border is a fence, and Hernández and his friends were allegedly playing a game where they’d cross the border, touch the fence, and then ran back. At some point, Border Patrol agent Jesus Mesa arrived and detained one of Hernández’s friends, while Hernández fled to the Mexican side of the border.

What happened next is contested. The government claims that Hernández and some others threw rocks at Mesa. Hernández’s family claims that he was “unarmed and unthreatening.” In any event, it is uncontested that Mesa drew his gun and fired. A bullet struck Hernández in his face, killing him.

The question facing the Supreme Court in Hernández is whether, even if Mesa killed Hernández in cold blood, Mesa is immune from a lawsuit brought by Hernández’s family. Regardless of who is telling the truth, the Supreme Court must assume at this early stage of litigation that the family’s version of the facts are correct, because the issue before the Court is whether the family may successfully sue Mesa if they prove that the facts are what they claim.

Yet, if the Court’s recent precedents in similar cases are any sign, it is very likely that Mesa will prevail. The Supreme Court will hear oral arguments in Hernández on Tuesday.

In its 1971 decision in Bivens v. Six Unknown Named Agents, the Court permitted federal lawsuits against law enforcement officers who violate the Constitution. But it has spent the better part of the last four decades tearing down that decision. With five hardline conservatives now entrenched on the Supreme Court, Hernández could transform Bivens into an empty shell.

The result would be that many constitutional violations by federal law enforcement would go unredressed. Victims of federal agents who violate the Constitution may no longer be able to sue those agents.

Although the Bill of Rights places a bevy of restrictions on law enforcement officers, including the Fourth Amendment’s ban on “unreasonable searches and seizures,” the Constitution is silent on whether individual officers may be sued if they violate them. A federal law permits suits against state law enforcement officers who violate “any rights, privileges, or immunities secured by the Constitution and laws,” but there is no such statute that explicitly authorizes suits against federal agents.

Bivens held that the right to sue federal law enforcement is nonetheless implicit in the Constitution. “Power,” Justice William Brennan wrote for the Court in Bivens, “does not disappear like a magic gift when it is wrongfully used.” A law enforcement agent who acts unlawfully “in the name of the United States possesses a far greater capacity for harm than an individual trespasser exercising no authority other than his own.” And thus the Constitution must offer a remedy to victims of rogue federal agents.

Brennan’s opinion, in other words, rests on something comic book fans will recognize as the Spider-Man rule — with great power comes great responsibility. If the federal government gives someone the power that comes from a badge and a gun, and that federal agent unconstitutionally abuses that power, then the agent may be held accountable for their actions by compensating their victim.

Not long after the Supreme Court handed down Bivens, however, the Court took a sharp right turn — and it’s steadily moved rightward ever since. The Supreme Court has “consistently refused to extend Bivens to any new context or new category of defendants,” according to its decision in Ziglar v. Abbasi (2017), and it’s “refused to do so for the past 30 years.”

The conservative narrative regarding Bivens is that Brennan’s opinion is a relic of a bygone age. “In the mid-20th century, the Court followed a different approach to recognizing implied causes of action than it follows now,” Justice Anthony Kennedy wrote for the Court in Abbasi (“cause of action” is a legal term referring a type of lawsuit that plaintiffs are permitted to bring). During what Kennedy describes as an “ancien regime,” “the Court assumed it to be a proper judicial function to ‘provide such remedies as are necessary to make effective” a statute’s purpose.’” Thus, the Supreme Court would routinely “imply causes of action not explicit in the statutory text itself.”

As the Court moved rightward, however, “the arguments for recognizing implied causes of action for damages began to lose their force.” Under this new, more conservative understanding, “it is a significant step under separation-of-powers principles for a court to determine that it has the authority, under the judicial power, to create and enforce a cause of action for damages against federal officials in order to remedy a constitutional violation.” While the Court has not explicitly overruled Bivens, it strenuously avoids applying it to new contexts, and any attempt to do so is now “disfavored” by the Supreme Court.

To understand the values underlying this shift away from Bivens, read Judge Edith Jones’s opinion for the United States Court of Appeals for the Fifth Circuit in Hernández, the decision now being reviewed by the Supreme Court. If Border Patrol agents fear lawsuits for possibly violating the Constitution, Jones writes, they may “hesitate in making split second decision.” And such hesitation “could undermine the Border Patrol’s ability to perform duties essential to national security.”

If someone like Jesus Mesa has to think twice before firing their gun at a 15-year-old boy, that could undercut the Border Patrol’s ability to prevent “the illegal entry of terrorists, terrorist weapons, persons, and contraband.”

Jones, in other words, argues for a kind of anti-Spider-Man rule. With great power must come the ability to use it — lest that power fail to protect us from terrorists.

And it is likely that there are five men on the Supreme Court who agree with Jones. The Court’s conservative majority spent the last four decades undercutting Bivens. And the current Court is more conservative than any Supreme Court in three generations.

Can Bivens be saved?

The thrust of the conservative case against Bivens is that Brennan’s decision was the product of a less responsible era — and an anomalous one at that. As Chief Justice William Rehnquist wrote in Correctional Services Corporation v. Malesko (2001), Bivens “recognized for the first time an implied private action for damages against federal officers alleged to have violated a citizen’s constitutional rights.” The key words here are “for the first time.”

Bivens, at least according to its opponents, was a departure from how the law ordinarily operates. Thus, rolling it back means restoring the law to the way it always should have been.

Lawyers for the Hernández family push back hard against this narrative, claiming that it is ahistorical, and that Brennan’s opinion merely brought greater coherence to a long line of cases holding that government actors may be sued when they act outside the law. The family’s brief recounts a long list of older Supreme Court decisions, some stretching back to the earliest days of the Republic, including Little v. Barreme (1804), which held that a Navy officer who unlawfully seized a neutral ship “must pay such damages as are legally awarded against him, and Wise v. Withers (1806), which held that a federal official was liable as a trespasser after he “entered the plaintiff’s home to collect a fine that had been (improperly) imposed by a court-martial.”

The brief spends several pages naming pre-Bivens cases, some of them quite old, where the Court held that a federal officer could be sued for stepping outside the law. As the Supreme Court held in Larson v. Domestic & Foreign Commerce Corp. (1949), “the principle that an agent is liable for his own torts is an ancient one and applies even to certain acts of public officers or public instrumentalities.”

The narrative pushed by the Hernández family’s brief, in other words, is that Bivens was not an anomaly at all. Rather, it merely brought an added degree of coherence to the ancient doctrine that government agents may be sued for their illegal actions. Before Bivens, the brief argues, federal officers were often held “to account under state law.” Bivens assured that these officers would, as Justice John Marshall Harlan wrote in a separate opinion, be held to account “according to uniform rules of federal law.”

Thus, under this narrative, Bivens was a modest opinion. Rather than creating a new kind of lawsuit out of nothing, it simply held that the law governing federal officials who violate the Constitution should be uniform across all 50 states.

The implications of this narrative is that a Supreme Court decision cutting too deep into the right to sue federal law enforcement officers who violate the Constitution would itself be a departure from ancient legal principles — and that this is especially true in a case such as Hernández, where the Hernández family has no way to seek redress for their injury unless they can bring a Bivens suit.

The Hernández family effectively accuses judicial conservatives of committing the very sin that those conservatives lay at the feet of Justice Brennan — the sin of ignoring settled legal principles to advance a political agenda.

Will that be enough to convince the Court to rule in the Hernández family’s favor? It’s doubtful. The conservative assault on Bivens has marched steadily forward for nearly four decades. It is on the cusp of victory. And the current slate of justices is more conservative than any Supreme Court since the 1930s.

It is likely, in other words, that federal law enforcement will gain a level of legal immunity that they haven’t enjoyed for a very long time — perhaps ever. And this broad new immunity will have a profound impact far away from the border as well.

As the Hernández family notes in its brief, “since Abbasi, the Third Circuit has held that Bivens remedies are unavailable against rogue Transportation Security Administration officers, and the Fourth Circuit has foreclosed Bivens claims against rogue Immigration and Customs Enforcement officers.”

Thus, the brave new world imagined by Judge Jones is already upon us. When the Supreme Court decides Hernández, it will likely only seal the deal.

Pope Francis to meet with top US cardinals over DC archbishop’s legacy of sex abuse allegations
Trump is reportedly souring on Defense Secretary Jim Mattis
We train police to be warriors — and then send them out to be social workers
Trump’s State of the Union suggests he’s worried about Bernie Sanders
SNL takes on pre-election anxiety in its Halloween cold open
The Matrix 4 is happening. Keanu Reeves, Carrie Ann Moss, and Lana Wachowski will all return.