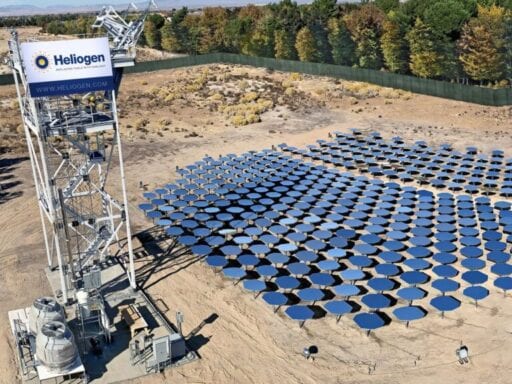 It’s pretty clear how we can reduce and eventually eliminate greenhouse gas emissions from some sectors of the economy. Electricity, transportation, and buildings, three of the biggest emitters, have a pathway to zero. It won’t be easy, and progress is too slow, but we have a handle on what to do.

But there are still big chunks of the economy that don’t have a clear line of sight to zero. They don’t yet have the tools they need at competitive prices. They are still waiting on innovation.

Many of them, including cement and steel, rely on large amounts of continuous high-temperature heat, and as I described in this post, there are very few viable low-carbon sources of such heat. Collectively, these industrial processes represent around 20 percent of global carbon emissions. It is one of the thorniest dilemmas in climate policy.

It’s not often that I write about a carbon policy dilemma only to have a clever new solution arrive in my inbox mere days later, but that’s what happened. A new company called Heliogen, coming out of stealth mode on Tuesday, has developed a brand new, zero-carbon way of generating high-temperature heat. It’s backed by an experienced team, boasts Bill Gates as an investor, and seems to have pulled off the rare trick of creating something new in the cleantech world.

Let’s take a look at how they do it.

Heliogen’s technology is based on concentrating solar power (CSP). That’s where hundreds of mirrors in a field are all angled to reflect sunlight onto a tower, inside of which is a steam turbine. The heat from the sunlight turns fluid (usually water) to steam, which runs the turbine, which generates power.

Visually, it’s probably the most striking and beautiful of all power generation technologies. Here’s a CSP plant in Seville, Spain:

CSP is a good idea, and it works well, but it stalled out in the 2010s, for the simple reason that solar photovoltaic (PV) panels won. PV got so cheap, so fast, that it undercut CSP. Now CSP is something of a niche product. (Except in Spain, where it’s big.)

Among the CSP startups that didn’t make it was eSolar, a company founded by entrepreneur Bill Gross and his well-known incubator Idealab. (I wrote about eSolar way back in 2008.) Rather than assembling large, complicated, curved heliostats (mirrors) on site, eSolar used small, flat, prefabricated heliostats of only about a square meter. They were cheaper, faster and easier to set up, more modular, and easier to replace.

Gross’s key insight was that he could replace a lot of the material and labor involved in CSP with computing power. (Or, he could replace stuff with intelligence.) Rather than make bigger, more complicated mirrors, he made small, simple ones and controlled them with software, so they stayed aligned more precisely and produced more power. As Gross realized, material and labor generally get more expensive over time, while computing power is always getting cheaper. Anything that substitutes the latter for the former saves money.

eSolar ultimately couldn’t overcome PV’s price advantage, but Gross’s insight remains useful. And with the launch of his new company Heliogen, it seems the technology could make a comeback.

What Gross and his team of scientists and engineers at Heliogen have developed, in a nutshell, is a way to use even more computing power to keep the mirrors even more precisely aligned, thus generating even more heat.

The team had to figure out how to monitor the mirrors in real time, to keep them all aimed at the exact same spot, Gross told me. It’s not enough to calibrate them once, as most CSP plants do. The ground subsides, the wind blows, the mirrors warp, and things slowly drift out of alignment. It may only be by centimeters, but those centimeters add up.

Obviously, a camera can’t be pointed directly at the mirror from the spot where the light is supposed to hit. The camera would melt.

Heliogen solved this problem by perching four super-powerful cameras around the top of the tower. Rather than directly measuring the intensity of light coming off a given mirror, they focus on four points equidistant around it. If the halo of light coming off the mirror is equally intense in each of the four quadrants, then the mirror is precisely aligned. (I find this delightfully resourceful.)

The four cameras are watching all the mirrors all the time, and the exact proper alignment of each mirror is being calculated all the time. As the image-analysis software calculates, it sends constant signals to the mirrors, which result in constant micromovements as the mirrors keep themselves perfectly focused on a single point, about 50 centimeters across.

It’s a “closed loop” system that monitors and adjusts itself, and it requires enormous computing power — more, Gross says, than was available even five years ago.

What is the point of this precise concentrating of light? Heat!

Conventional CSP towers can only get to about 560 degrees Celsius — enough to boil fluid and run a turbine, but not much else. Heliogen’s towers have reached just over 1,000° C and the company believes with further improvements it can hit 1,500° C. That would be a whole new ball game.

There are lots of industrial processes that can use 1,000° C heat, like steam reforming of methane. And as that heat creeps higher, it becomes useful for more and more processes, from cement to steel.

When the temperature hits 1,500° C, it opens up something of a holy grail: direct, thermochemical generation of liquid fuels that can substitute for any hydrocarbon fuel.

Huh? Let me explain, as this is a relatively new engineering development, being perfected by Swedish researchers as we speak. It goes like this: a new, state-of-the-art material called ceria (CeO2) is heated to about 1,500° C, at which point it releases a pure stream of oxygen. Then, at about 1,000° C, water and carbon dioxide are introduced. The ceria wants its oxygen back, so it breaks the water and carbon dioxide up into hydrogen, carbon monoxide, and oxygen, and absorbs the oxygen. What’s left is a mix of hydrogen and carbon monoxide, otherwise known as “syngas.”

Basically, you start with H2O + CO2 and you end up with a mix of H + CO. As it happens, every hydrocarbon (fossil) fuel in the world, from kerosene to gasoline, from boat fuel to jet fuel, is built around some combination of H and CO, which means synfuel can be refined into any fuel, for any purpose. If the CO2 that feeds into the process is drawn from the ambient air via direct air capture (DAC), which is still a big if for now, then the resulting fuels can be said to be carbon-neutral, a huge improvement on the carbon-intensive fuels now in use.

Cumulatively, these markets for carbon-free industrial heat — steam reforming of methane, cement, steel, synthetic liquid fuels, and more — are enormous, up to a trillion dollars globally, and represent around a fifth of global GHG emissions. They include almost all the most difficult-to-decarbonize sectors.

Heliogen may or may not succeed, but it has a genuine innovation

Obviously, Heliogen’s technology can’t work with every industrial facility. For one thing, Gross estimates that only about half of them worldwide have the land necessary to build a solar-heat facility on site. Facilities would have to integrate what is effectively an airborne oven into their process flow. And every facility would still need backup sources of heat, since the sun is only out for eight hours a day.

Until the technology is proven in a commercial setting, it’s difficult to say much about the real-world performance and costs, so there’s no way to know whether or how much Heliogen may succeed. Though it is stocked with talent and well-funded — Bill Gates said he is “pleased to be an early backer” of what he called “a promising development in the quest to one day replace fossil fuel” — it faces the same difficult hurdles as any startup. Most of them die.

Still, whatever its fate, Heliogen is something fairly rare in the world of technology: a genuine innovation. And it’s a great application of Gross’s insight, for which I have become something of an evangelist, namely that the clean-energy transition is going to proceed in large part by substituting computing power for material and labor, i.e., intelligence for stuff.

The ongoing explosion in computing power — AI, machine learning, ubiquitous real-time sensing, and all the rest of it — is going to enable innovations in energy that we can’t begin to predict. It will make our renewable energy technologies more responsive to real-time variations in sun and wind, more able to continuously adapt. It will make our cars and buildings smarter, more able to exchange energy. It will enable the electricity system to decentralize and maximize local resources. And the computing power we have today will look primitive by 2030.

That’s one reason the clean-energy transition is going to happen faster than energy transitions of the past: It will be aided and accelerated by computing power, an extension of our imaginations and inventive powers that is new in all of history.

Disney has fired Guardians of the Galaxy director James Gunn over old, gross tweets
How protesters are turning the tables on police surveillance
What we know about a Thai mass shooting
Tesla is casting a spotlight on the government’s struggle to keep up with self-driving cars
Joe Biden’s first 100 days
Turkey wants to send Syrian refugees to the new “safe zone.” Some refugees are terrified.