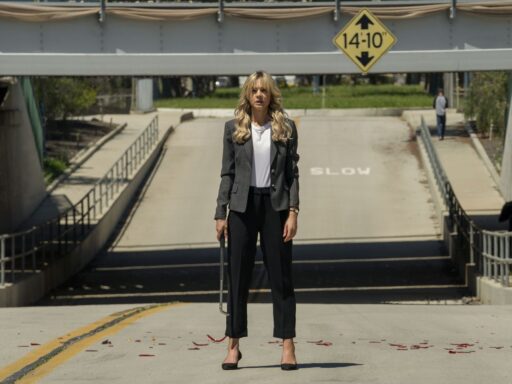 How you feel about the ending likely depends on what genre you think the movie is in.

You might love the new Carey Mulligan movie Promising Young Woman. You might hate it. You might be indifferent to it. But one thing seems almost certain: You will have strong feelings about its ending.

Most of Promising Young Woman seems like a clever riff on exploitation films, where someone who’s been wronged has their revenge. Mulligan plays Cassie, whose best friend, Nina, was raped when the two were in medical school. Though Nina reported the rape and though there was video evidence, no one at the school took her claims seriously and punished the perpetrators. Both Nina and Cassie left school, and it’s heavily implied that Nina later died by suicide.

Now, Cassie routinely avenges Nina by going to bars and pretending to be drunk. Inevitably, a man takes her home, and inevitably, he tries to sleep with her without her clear consent. Before he is able to, she reveals her ruse, talking to him cogently and terrifying him at the thought of what he just almost did. (Inevitably, the men try to turn their predicament back on Cassie, but the movie doesn’t take their pushback seriously, to its credit.)

Cassie’s plan also involves more direct revenge on the people she blames for Nina’s death, including a former friend who left the two of them high and dry, the lawyer who defended Nina’s rapist in court, and the college’s dean. But the person at the top of Cassie’s list, as you’d expect, is Nina’s rapist, Al. And Al is about to have a bachelor party.

Cassie gets the location of Al’s party from Ryan, the guy she is dating for much of the film, until she realizes that he, too, didn’t do anything to help Nina as she was being raped in front of numerous people at a party. (Promising Young Woman never once depicts what happened to Nina, nor does it really say what happened, but you understand precisely what transpired all the same because Nina’s story is so sadly common in our own world.)

So Cassie disguises herself as a stripper and shows up at Al’s bachelor party, where she will carry out her final act of revenge: carving Nina’s name into Al’s skin after she handcuffs him to the bed.

But things don’t go according to plan. And that’s when the movie goes from good to great for me — and loses many other people.

So here’s what happens: Al breaks free of his restraints, and he smothers Cassie with a pillow. She dies. The movie then shifts perspective to follow Al and his friend Joe as they attempt to cover up their crime. Later, at Al’s wedding, the final act of Cassie’s plan unfolds as the cops show up to arrest Al for Cassie’s murder. She had sent the location of the bachelor party to the remorseful lawyer who once defended Al in the rape case, with a heads up that she planned to be there, in the event that she disappeared. He contacted the police. Al went to jail after all.

Those developments are a lot to cram into the last 15 minutes of a movie, even when you accept that Promising Young Woman has already crammed a lot of other incidents into its story before that. But seeing Cassie’s death made me realize just what writer/director Emerald Fennell had been up to all along: She was forcing us to see just how thoroughly the point of view of guys like Al has suffused our pop culture.

“Bachelor party goes south when the stripper and/or sex worker dies” is a cliché at this point, but most stories of this particular stripe are told from the point of view of the bachelor party attendees, not that of the stripper or sex worker. Because Promising Young Woman is so thoroughly centered on Cassie, the sudden shift to a storyline that feels like it belongs to another movie entirely is incredibly jarring. Yet that jarring quality has a purpose: It helps viewers realize that the more typical version of this film would turn the stripper into a disposable corpse — it would never allow her to be the protagonist.

“What does this story look like from the point of view of one of the minor characters?” is a useful question for any writer to ask themselves about what they’re writing. But what Fennell has done in Promising Young Woman is focus on an entire trope via the point of view of the person most often treated as a sacrifice that’s necessary to get the plot going.

In fact, I would be very surprised if Promising Young Woman wasn’t reverse-engineered, just a little bit, from “What does the story of the stripper who dies at the bachelor party look like if it’s told from the stripper’s point of view?” By forcibly reminding us of whose story this would normally be — namely Al and Joe’s — Promising Young Woman needles the audience just a bit to reconsider all the nameless women’s corpses we’ve seen in other films and TV shows, the ones that kick off a story about the men in their vague proximity, sometimes the men who actually killed those women.

It also dares us to shift our empathy from Cassie to Al or Joe with this choice. Audiences have a tendency to cut a protagonist a lot of slack, and once Cassie is dead, Promising Young Woman lacks a protagonist entirely. Al could step in to fill that void. After all, none of us would want a vengeful woman to carve her best friend’s name into our skin.

That’s why the movie’s ending — where Cassie sends Al to prison from beyond the grave — is so very important. Without it, the movie wouldn’t just end on a downer note; it would actively undercut everything that happened before and risk leaving viewers with the primary memory of yet another terrible man getting away with a terrible thing.

But, yeah, the final steps of Cassie’s plan are a little implausible. Or are they?

Before Promising Young Woman becomes a movie about a bachelor party gone wrong, it nimbly hops between three very different genres: the romantic comedy, the exploitation thriller, and the character study. The genre it most properly belongs to is the lattermost, as the action of the film is mostly devoted to trying to figure out just what makes Cassie tick. But figuring out what makes Cassie tick requires following her as she terrifies the guys who take her home from the bar or confronts the people she holds responsible for Nina’s death (the movie’s exploitation thriller plot). And then it also requires seeing who Cassie is within the context of her relationship with Ryan (its rom-com side).

But Promising Young Woman’s concluding moments, when Cassie’s plan brings down Al at his own wedding, the movie places all of its chips on exploitation thriller. The rom-com is over, with Ryan having been found to be just as shitty as all the other guys. And since Cassie is dead, the character study is over, too, because we can no longer get further insight into her. Indeed, if the movie were a pure character study, Al and Joe would have likely gotten away with murder. But because Promising Young Woman has an exploitation thriller card left up its sleeve, it pulls off one last trick.

Exploitation thrillers often involve traditionally disadvantaged people taking on the people who wield all the power. Cassie, for instance, is a woman fighting back against rape culture and the patriarchy, so the people she takes on are shitty drunken dudes who fancy themselves nice guys. Exploitation thrillers almost always end with some sort of victory for the hero, no matter how quixotic. Even if the hero dies, some justice will be done. (Another famous example, from another movie that uses the trappings of the exploitation thriller to its own ends: Kill Bill, which ends with its hero driving off into the sunset after killing everyone who used, abused, and oppressed her.)

An exploitation thriller ending is precisely the ending that Promising Young Woman serves up. Many viewers might balk at the fact that a lot of stuff has to go right for Cassie’s plan to work: She has to hope the lawyer will do the right thing, she has to hope the cops will take a message from beyond the grave seriously, she even has to schedule a series of texts to send to Ryan (who is attending Al’s wedding) at precisely the right moment for maximum dramatic impact.

In the context of an exploitation thriller, all of this is totally reasonable. Promising Young Woman’s cascading end sequence is no more unbelievable than, say, Cassie going home with dozens of men, humiliating and scaring them, then encountering no issues beyond the guys getting mad at her. Within this genre, the rules of reality are justifiably stretched just a little bit.

I have a test that I sometimes apply to works of fiction, especially movies. I call it the “Would This Be A Movie Otherwise?” test. By this I mean that if I find something that happens in a movie implausible but not impossible, I consider whether the movie would be as successful without it. Cassie’s plan coming together definitely stretches credulity, but you can also explain, more or less, how she pulls it off. It’s implausible but not impossible. And to my mind, Cassie’s story wouldn’t really make for much of a movie without her posthumous revenge. Her death would have ultimately displayed just how disposable women are in a world run by men, a point that Promising Young Woman has made and subverted many times over by the time she dies.

If we imagine the events of this movie happening in real life, the only way they would rise to the level of a story that would, say, make the national news (or at least one of the more popular unusual news subreddits) would be if Cassie actually pulled off the film’s improbable denouement. Therefore, Promising Young Woman wouldn’t be a movie without its final moments. They put a bow on something that resolutely refused to have a bow put on it for most of its running time.

If that all feels a little like writing an entire math class story problem backward from its answer, well, it is. Sort of. Fennell contorts several events in her movie to arrive at its final scene, an approach that feels like a cheat in a character study but plays as triumphant in an exploitation thriller.