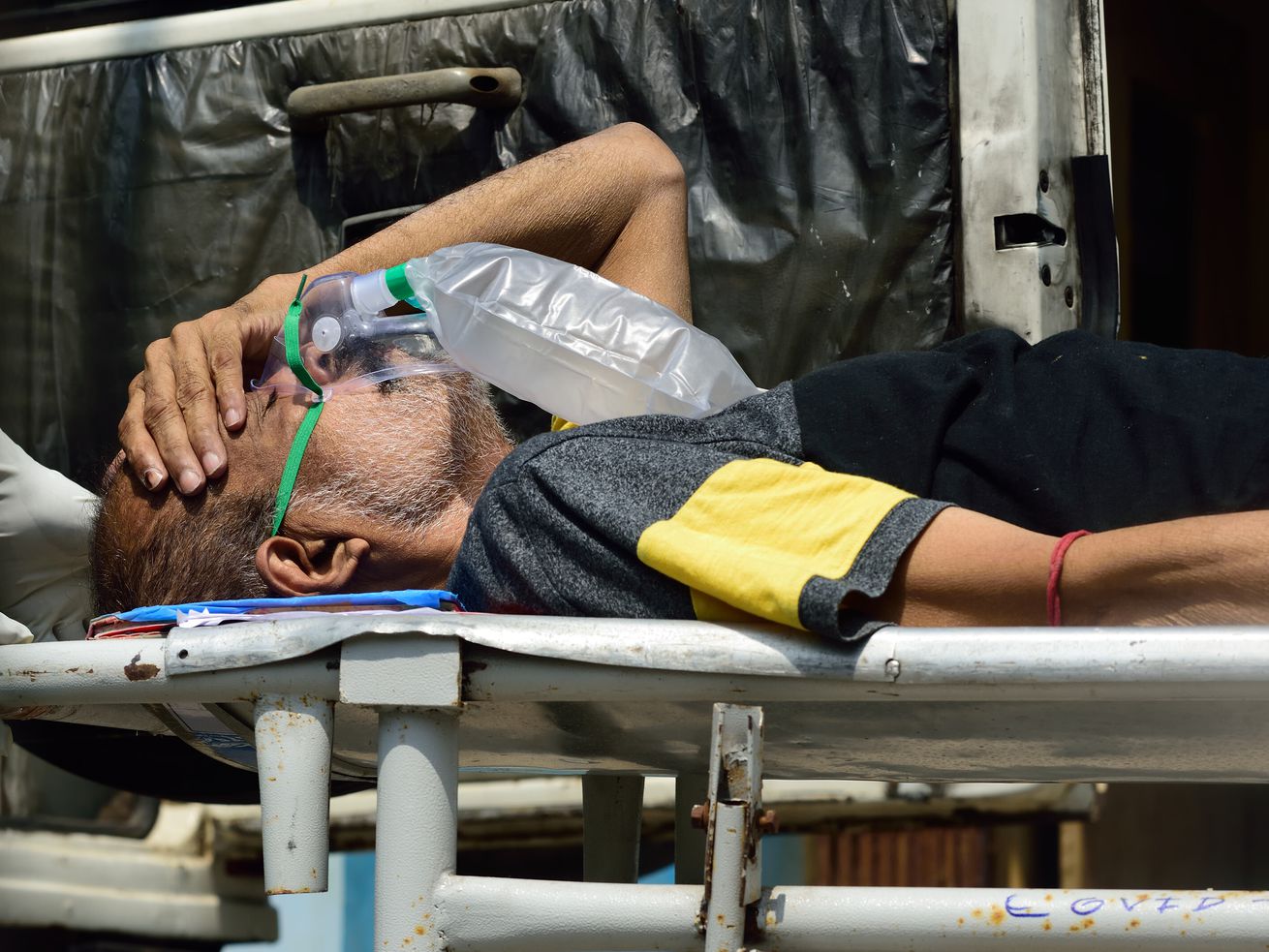 India set a pandemic record with almost 347,000 new cases in a day.

A horrific surge in coronavirus cases in India continued on Saturday, with new cases re-breaking a single-day world record as the country’s health care system struggled to keep up. But even as hospitals and crematories become overwhelmed and the country faces a significant vaccine shortage, mass public events continue unrestricted, and the Indian government is censoring tweets critical of its pandemic response.

The country reported almost 347,000 new cases over a 24-hour stretch, according to the New York Times, setting a new worldwide high for the third day in a row. Deaths also climbed, to a record 2,624 in a single day, and the rolling seven-day average of daily new cases in India is quickly approaching 300,000.

As a result, hospitals are starting to run out of beds and oxygen alike. In Delhi Saturday, one hospital network even announced that it was suspending admissions, according to Reuters, while elsewhere patients have been forced to share a hospital bed.

This is not a curve or a wave. It’s a rocket. A straight vertical line.

If this is a bad COVID variant causing this, it will be prudent for all countries to help India with vaccines and raw materials for vaccines.

I’m not aware of the details. I just hope we do the right thing pic.twitter.com/kdBeMU87AI

Shortages have grown so bad that hospitals have resorted to using Twitter to plead for more oxygen. At least 20 patients in a Delhi hospital died Friday, according to CNN, after additional oxygen supplies were delayed.

“The volume is humongous,” Jalil Parkar, a senior pulmonologist at the Lilavati Hospital in Mumbai, told CNN. “It’s just like a tsunami.”

The death toll has also begun to overwhelm crematories, raising concerns that, as bad as the official figures are, the true situation in India could be far worse. According to the New York Times, crematories are in some cases reporting more cremations in a day than the number of officially reported deaths.

And on Monday, the Washington Post reported that in Surat, a city in India’s western Gujarat state, crematories are dealing with up to five times as many dead as normal. In one case, the steel chimney pipes melted from overuse.

Despite the magnitude of the crisis, India has yet to impose a new national lockdown, as it did in March 2020. And while some cities and states are imposing their own lockdowns, almost-certain superspreader events — such as massive political rallies and a major Hindu religious festival — are continuing.

According to the BBC, millions of Hindus from around India have gathered for the Kumbh Mela festival in northern India, where attendees take a dip in the Ganges River.

And Indian Prime Minister Narendra Modi has kept up campaign events for his Bharatiya Janata Party in the state of West Bengal, declaring that “India had defeated Covid last year and India can do it again.”

At the same time, the Indian government has successfully petitioned Twitter to take down posts critical of its response to the crisis. According to BuzzFeed News, more than 50 critical tweets, from public officials, journalists, celebrities, and citizens, were taken down.

As Vox’s Katelyn Burns reported last week, a vaccine shortage has also exacerbated the crisis — and international trade policy is contributing to that shortage.

Though India has substantial vaccine-manufacturing capacity, both the US and Europe have imposed limits on exporting crucial raw materials, hampering India’s vaccination effort. The country is home to almost 1.4 billion people, but only about 21.4 million people — or about 1.59 percent of the population — have been fully vaccinated, according to Johns Hopkins University.

It’s unclear, however, whether the US will revise its policy in response to the crisis in India. On Thursday, State Department spokesperson Ned Price deflected when asked about the policy at a press briefing.

Price said that the current policy was under the “purview” of the United States Trade Representative (USTR), the agency that oversees trade policy, but suggested that the Biden administration was prioritizing getting shots in American arms.

“What I will say broadly is that the United States first and foremost is engaged in an ambitious and effective and, so far, successful effort to vaccinate the American people,” Price said. ”That campaign is well underway.”

“United States first and foremost is engaged in an ambitious and effective and, so far, successful effort to vaccinate the American people”, US State Dept when asked about #COVID vaccine raw materials export to India pic.twitter.com/YvzhuaAv3n

The export limits, however, are by no means the sole cause of India’s vaccine woes, nor would lifting them be a panacea as the coronavirus crisis there deepens.

Among other problems, the current surge in cases could stall a vaccine rollout even if vaccine availability increased, as Vox’s Jen Kirby has reported:

It’s a lot harder to massively ramp up a vaccination campaign in a country that is already floundering because of a health crisis. The same nurses or technicians deployed to vaccinate people are often the same personnel who need to attend to Covid-19 patients or conduct testing and contract tracing.

That could intensify the coronavirus surge, which could further stall the vaccination campaign, creating a dangerous cycle.

There are other problems as well, including lockdown fatigue, government failures, and a new Covid-19 variant emerging in India.

“The public sentiment [in India] is of denial, fatigue, and fatalistic surrender,” University of Michigan biostatistician and epidemiologist Bhramar Mukherjee told Kirby this month. Not only are mass religious and political events going forward, but according to the Hindustan Times, mask-wearing and social distancing at those events have largely gone by the wayside.

That fatigue is only compounded by how economically devastating India’s first lockdown was for the country. Some 32 million people fell out of the country’s middle class, according to Pew Research Center, and the number of people living in poverty in India, defined as those living on $2 per day or less, increased by 75 million.

Adding to the crisis are concerns about a new virus variant spreading in India. The variant, a “double mutant,” with two identified mutations, may be more transmissible than other strains of the coronavirus.

Little about the variant is known for sure yet — according to Bloomberg, it’s still unclear whether, or to what extent, the new variant, B.1.617, is driving India’s catastrophic spike in cases and deaths — but the mutant is quickly becoming the dominant strain in parts of India.

Already, the variant made up about 70 percent of virus samples collected in late March — an increase of more than 50 percent from three weeks earlier, according to the Wall Street Journal.

“India had a double whammy,” T. Jacob John, a retired virology professor at India’s Christian Medical College, told the Journal. “We let our guard down when the variants were spreading. It was the worst time to do so.”

New York City adopts ranked-choice voting, a major milestone for the reform
“This is not normal”: Cory Booker calls out Republicans rushing Amy Coney Barrett’s Supreme Court he...
Trump demands Obama be made to testify in the Senate
Vox Sentences: The end of the road for Theresa May
Vox Sentences: Moon 2024
Walmart’s $25 insulin can’t fix the diabetes drug price crisis