A crucial federal program tracking dangerous diseases is shutting down 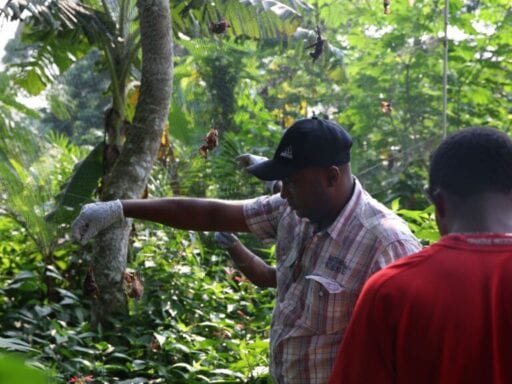 Most of the deadliest diseases to affect humanity leap to human hosts from other animals. The 1918 flu pandemic likely came from birds. HIV likely jumped from a similar virus in chimpanzees and other monkeys. Recent Ebola outbreaks have come from bats, rats, and gorillas.

Ever since the 2005 H5N1 bird flu scare, the US Agency for International Development (USAID) has run a project to track and research these diseases, called Predict. At a cost of $207 million during its existence, the program has collected more than 100,000 samples and found nearly 1,000 novel viruses, including a new Ebola virus.

But on Friday, the New York Times reported that the US government is shutting down the program. According to its former director Dennis Carroll, the program enjoyed enthusiastic support under Bush and Obama, but “things got complicated” in the last few years until the program “essentially collapsed.”

Some aspects of the program — it’s unclear which — will be continued under different auspices in other departments of the government. But the core program — working with local researchers around the world to collect samples and better understand viruses in animals — is over.

That’s a shame, and it’s indicative of a bigger problem. While pandemics make the news when they happen, efforts to understand, predict, and prevent them are underfunded. The US government has several agencies that do work on pandemic preparedness, but experts say that much more leadership in the area is needed.

As researchers warn that a flu like the 1918 influenza outbreak could kill as many as 50 million to 80 million people — and as new technologies alter the landscape of biology research, making it possible to study diseases in new ways but also making dangerous research easier than ever — it’s important for the US government to treat pandemic risks as a serious priority, to be addressed through many different organized international programs. The cancellation of Predict, despite its reported shortcomings, is a step in the exact opposite direction.

Predict’s mission, according to USAID, is “detection and discovery of zoonotic” — that is, animal-originating — “diseases at the wildlife-human interface.” Anywhere where wild animals live in close contact with humans, there’s potential for disease transmission. Humans can kill and eat wild animals, exposing themselves to diseases. Migratory birds can infect livestock birds which then infect other livestock and humans, leading to avian flus in humans.

By identifying viruses in animal populations, researchers were able to identify livestock and wilderness management practices that might reduce the risk of disease transmission, as well as investigate some mysterious die-offs that could have been precursors of a new illness. The ultimate goal, of course, was to prevent the next pandemic from catching us unawares.

Carroll, who led Predict for a decade, told the Times he blamed the shutdown on “risk-averse bureaucrats.” USAID largely delivers economic aid through tested, well-established programs, like malaria nets. Predict is more of a science program.

But in other ways, Predict was a natural fit for USAID. Precisely because USAID delivers assistance, it has strong relationships with partner countries. Pandemics, if they happen, will almost certainly be global, which means that the US has a strong interest in developing local expertise in pandemic management and building strong ties between US researchers and local researchers. Research happening through the Defense Department (USAID is run out of the State Department) might not benefit from those strong local relationships.

“They have a high level of trust,” Dr. Hughes, a former chief of infectious diseases at the Centers for Disease Control and Prevention, told the Times. “And they help countries comply with the International Health Regulations,” which require reporting of major disease outbreaks. International disease management efforts are frequently hindered by countries’ hesitance to report outbreaks.

The end of Predict is a symptom of a bigger problem: The US government isn’t taking the risk of pandemics as seriously as it should be, and it isn’t investing enough in spreading the expertise and best practices that might be needed in the case of a global pandemic.

“It is the prospect of another such pandemic — not a nuclear war or a terrorist attack or a natural disaster — that poses the greatest risk of a massive casualty event in the United States,” Ron Klain, the former White House Ebola response coordinator, wrote for Vox last year. And yet pandemic preparedness gets very little attention.

Klain proposes three solutions: better vaccines, better US infectious disease response capabilities, and bolstering global response capabilities. That last item was the goal that Predict was aimed at. Since pandemics can so easily sweep across national borders, it’s impossible for any country to be secure without good response systems around the world. That requires work in many of the poorest parts of the world to ensure critical research on detecting viruses gets done and to ensure local labs and response teams are prepared to report outbreaks and cooperate internationally to address them. With less infrastructure to accomplish that, we’ll all be worse off.

As Klain put it,

Our current global response capacity relies on the WHO to declare that an epidemic is underway, and provide general coordination for a response. Most of the hardest work —actually treating sick patients, and engaging with locals on how to deal with the threat — is performed by a number of courageous NGOs such as Doctors Without Borders, the International Rescue Committee, and Partners in Health…

If science fiction became reality, and the world was threatened by interstellar invaders putting tens of millions of lives at risk, it’s hard to believe we would face that danger “armed” only with an international regulatory organization and a cluster of NGOs. And yet that is precisely what we will be relying on what a major epidemic comes our way.

With the end of the Predict program, we’ll have even less to rely on — precisely when we could have benefited from a lot more.

The Heathers TV show was pulled following a mass shooting — for the third time this year
An EPA children’s health official says Trump wants to “disappear” her office
The case against summer camp
Vegan meat alternatives are on the rise
A Republican helped sink one of Trump’s court nominees over his racist college writings
Study: Allowing evictions during Covid-19 could have caused nearly 11,000 unnecessary deaths