A day in name-changing court 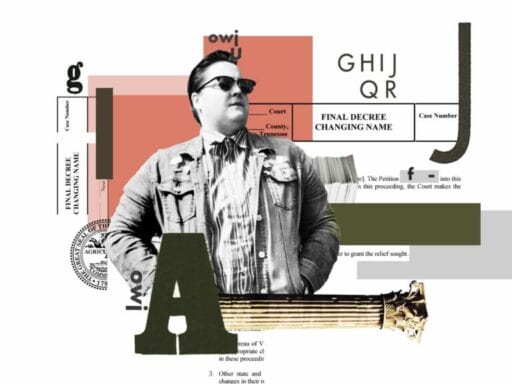 Legally changing my name was an emotional day. The best part was sharing it with strangers.

I was sitting on a long wooden bench in the Shelby County Probate Court hallway when I heard my name called for the very last time.

Next to me was a woman roughly in her 30s holding a stack of papers in her lap, beside her a girl of about four. The woman, who had an unusual name, had decided to name her daughter after her, a poignant idea that ended up being a much bigger headache than she expected. She was there to change the spelling of their names to alleviate some confusion. The benches filled up with others like us, all waiting to be called into chambers to explain why we were there.

For my 29th birthday, I bought myself a first and middle name change at my local probate court in Tennessee. My new middle name, Dylan, wasn’t totally new. I had adopted it five years ago among friends, family, and coworkers, and it had been generally accepted with a few notable holdouts. It was the perfect transitional name: traditionally masculine yet gender-flexible, freeing me to explore moving through the world with a different identity. My chosen first name, Jack, was one I had never used before. I picked it because it shared the same first letter as my birth name, and for its unabashed masculinity.

I knew I didn’t want to be a girl from age 7. What kept me from coming out until I was 28 was the idea that I had to find some sort of social scientific proof that I was really a man. Some days, I subconsciously fantasized they would invent a trans scanner so I could know for sure. It wasn’t enough that at 7 years old, I snuck into my brother’s room to try on his JV football jersey, that I cried the first time I had to wear a bra in fifth grade, that I looked longingly at my much older cousin tying his tie before church at 14. Whatever your mental fortitude, being constantly told you belong to a certain gender is not an easy conviction to shake.

The first step for many trans people when they come out is choosing a name that better aligns with their self-concept. It’s an important one. It signals to your community and the wider world that you have taken control of how you will be referenced. It also opens you up to uncomfortable assumptions about your gender. Name changing has the added “benefit” of very quickly ascertaining who loves and respects you over those who value their own projection of you first.

I would like to say that I took the time to deeply consider the time, energy, and costs to change my name on every legal document, credit card, and account. Or the discomfort of having a male name while being read as female putting a wrench into everything from applying for a job to being introduced to my friend’s conservative parents. Instead, I decided the night before, reading the instructions on the county court’s website over and over again and excavating my file cabinet for a copy of my birth certificate. The final decision was impulse at best, egged on by the happy coincidence of my birthday falling on the same day as the court’s scheduled day for name-changing. I took it as a sign.

If you want to change your legal name, you need state-sanctioned proof of your birth name, such as a birth certificate, and proof of residence in your state. You will then fill out a series of forms and explain why the court should grant you this change. You pay them the fee, which varies by state, but usually costs at least $150 (mine cost $167), and then swear an oath that you are not trying to avoid paying your debts. It is clear they do not take your word for it, because you will have to make the same assurances in the courtroom.

It’s a lot. But the beauty of a name change is that, unlike, say, obtaining hormones or petitioning your insurer to cover top surgery, there’s an actual process already laid out for trans people. As long as women have been expected to change their last names to their husband’s, and as long as parents have forced some embarrassing name on their child, name changing has existed.

The day I changed my name, I arrived early. I sat in the court chambers waiting for my turn when the middle-aged, friendly-eyed woman next to me asked me about my new name. I was hesitant to answer, feeling too vulnerable to endure any rejection on my special day. But I took a deep breath and said, “I’m changing my name to Dylan,” hoping the conversation would stop. She smiled and said, “That’s a great name. What did you change it from?” I shifted a little on the bench, but told her. After a slight dawn of recognition, she acknowledged my reply kindly.

As we chatted, I learned that she was there because her adult son was changing his last name to that of the man who had raised him as a present for Father’s Day. She explained that all of his other siblings had changed their last names already, but he had been older when his father came into their lives, and it’s more difficult to shake a name the longer you have it. I knew exactly what she meant.

She was beaming and explained that she was anticipating tears from her husband. “How could he not?” I said.

I waited about 45 minutes seated on the bench, watching a parade of people explain to the clerk why they were there and take their seats beside me: a small group of young queer-presenting people, plenty of newlyweds, and a cluster of individuals who sat alone quietly, clutching their paperwork. One woman in her 50s told the clerk that her unusual name had always caused confusion and mispronunciations. It had even been misspelled on her high school diploma. She knew it seemed odd that she had waited so long to change it, she said, but her mother, who had given it to her, had finally passed away. She felt like it was time to let it go.

Another trans person, only in their teens, did not have accepting parents but had brought along a chosen family to support their name change. I shared a supportive glance with them as they took their seats. I felt less alone.

The courtroom doors swung open and 15 or so of us were directed to a row of seats at the back. Turn your phones off, the bailiff instructed. He flipped a switch when we were all inside, and seconds later a robe-less judge appeared and said “all rise.” I was the second in line, realizing with dread that I was going to be questioned on the stand. The primary concern of the court was to make sure none of us were trying to avoid debt collectors or the law, yet the questions were more probing than I expected. Why do you want to change your name? Where do you live? A clerk and a court reporter were nearby, entering it all into the record.

As I waited, I suddenly considered what it would mean to identify myself as trans on the record. What did it mean to be seeking some kind of affirmation from a state that has no legal protections for people based on gender identity?

The judge called my last name, and I took the stand to the left of the judge. I had the same feeling as when I first saw the “Mona Lisa” in Paris, that feeling of participating in something you’ve seen representations of hundreds of times but never experienced yourself. This is really how it goes then.

“What is your reason for changing your name?” the bailiff asked.

“Gender identity,” I said. He gave me a reassuring smile, I think.

When it was over, the clerk came back and showed me back to the office where I began. They sent me off with five certified copies and a sheet explaining all the documents I was required to change. I walked back down Adams Avenue with what can only be appropriately called gender euphoria. A clerk who I had chatted with when I first arrived was passing in the other direction. “How did it go?! Congrats!”

I walked into the Shelby County Probate Court because I wanted to affirm myself in an official capacity, to become closer to who I was. What I didn’t expect was for my name changing process to be such a unique shared experience with everyone else in that room. Other than newlyweds, there is no celebrated milestone or cultural script that leads you to believe you will ever find yourself in a courthouse signing away a name you’ve carried around for a couple of decades or more. But here we all were.

We all named ourselves, and demanded to be recognized. We bore witness to each other.

J. Dylan Sandifer is a writer living in Memphis.

How Trump could win the 2020 election through the Electoral College
Why Hamilton is as frustrating as it is brilliant — and impossible to pin down
Democratic presidential candidates call for Brett Kavanaugh’s impeachment
It’s official: women have been nominated for a record number of House seats
The Senate doesn’t have enough coronavirus test kits — but it doesn’t want ones from the White House
A new study on measles reveals a scary side effect: “immune-system amnesia”