A delicious feast of food movies 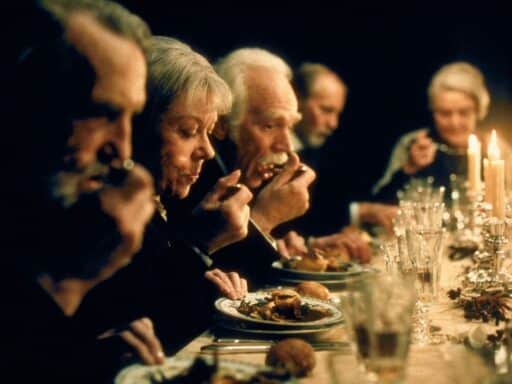 Comedies, dramas, documentaries, and more to stream after you’ve had a good meal.

In the US, it’s the week of Thanksgiving, and a very unusual one. With the ongoing coronavirus pandemic hampering travel and families rethinking their celebrations in pursuit of safety, the holiday defined by a feast looks different for a lot of people.

But it’s still a feast, even if it’s on Zoom. And after any feast, the best thing to do is curl up on the couch with a slice of pumpkin pie, a cup of something warm, and a delicious, joyful food movie.

Cinema has set feasts on screen for a long, long time, using food to evoke desire, love, loneliness, bounty, happiness, and a lot more. And there are many to take in, whether you’re craving a little cinematic confectionery or a grand banquet. Here are 10 great films you can stream about feasts, food, family, and what cooking and eating teach us about being human.

Based on a story by Isak Dinesen, Babette’s Feast is about a sect of austere, severe religious people living on a remote Denmark coast in the 19th century. They are led by the elderly daughters of the sect’s founder, they view pleasures as a distraction from God, and they eat only bland food. But their lives are upended when Babette (Stéphane Audran) shows up at the women’s home, seeking refuge from violence in her native Paris. They’re suspicious of her. But she offers to work for free, and stays with them for 14 years, gaining their trust. One day, she wins the lottery, and instead of using the money to finally go back home, she uses it to prepare a lavish feast in honor of the sect’s founder. And that feast — both in the story and as an on-screen repast — becomes legendary.

How to watch it: Babette’s Feast is streaming for subscribers on HBO Max. It’s also available to digitally rent or purchase on iTunes and Amazon.

Stanley Tucci and Tony Shalhoub (need I say more?) play brothers, Italian immigrants to the US, who open a restaurant that is suffering for business because their customers’ tastes lean more toward Italian-American food. Vexed and facing a shutdown, they reach out to a friend who arranges for a famous jazz singer to attend a fancy dinner at the restaurant and thereby drum up business. They prepare a sumptuous meal and invite their friends but, of course, nothing goes as planned. Tucci co-wrote and co-directed Big Night with Campbell Scott, and it’s wonderful: A bittersweet movie about a feast that is, itself, a feast.

How to watch it: Big Night is available to stream for Amazon Prime subscribers and for free (with ads) on Pluto. It’s also available to digitally rent or purchase on iTunes, YouTube, Vudu, and Google Play.

City of Gold, about the late and beloved Los Angeles food critic Jonathan Gold, is among the best food documentaries ever made, largely because it isn’t just about food; it’s about loving a place through being a critic. Directed by Laura Gabbert (who also directed Ottolenghi and the Cakes of Versailles), the film follows Gold as he drives his green pickup truck through LA, eating at a handful of hole-in-the-wall strip mall restaurants that most people just blithely sail past, talking about his career and his approach to his work. It’s an illuminating portrait not just of a writer but of a city, and it’s a kind of master class in how good critics think, work, and live.

How to watch it: City of Gold is available to stream on Amazon Prime for subscribers with the IFC add-on subscription. It’s also available to digitally rent or purchase from iTunes, Amazon, YouTube, Google Play, or Vudu.

Feast of the Epiphany is the most experimental and daring of the films on this list, and one that will haunt you after it’s over. The first half is a scripted, fictional drama set in a New York apartment at an Epiphany dinner (celebrated by some Christians on January 6, traditionally the day the Magi arrived at the stable where the infant Jesus lay in a manger). The second half is a documentary centering on Roxbury Farms in upstate New York, where a team of farmers raise food and live off the land. Directed by Michael Koresky, Jeff Reichert, and Farihah Zaman, it’s a diptych in which the two halves echo and mirror one another implicitly, and make us think about the role that food plays in our lives — both as social beings and creatures of the earth.

How to watch it: Feast of the Epiphany is available to digitally rent on Vimeo through November 29.

For a modest drama about capitalism, male friendship, and baking …
Watch First Cow (2020)

Kelly Reichardt’s First Cow is set in a 19th-century frontier settlement somewhere in Oregon, near the Columbia River, populated by people who are living in tiny houses and trying to scratch out a living in the New World, as well as the First Nations people who’ve been there for generations. Into that settlement, a cow arrives, setting off a chain of events that are both momentous and small. But the film is about much more than just that. First Cow is also a gentle (and gently devastating) tale about male friendship, about finding someone to share your aspirations and dreams with, and, most deliciously, about cooking. (Don’t be surprised if you have a craving for blueberry clafoutis when it’s done.) And it’s also about the kinds of constructed hierarchies — based on factors like race, class, money, and firepower — that seem to be imposed on the world wherever new civilizations pop up.

How to watch it: First Cow is available to digitally rent or purchase on iTunes, Amazon, YouTube, or Google Play. With a Showtime add-on, it’s available to stream on Hulu.

An entire documentary about sushi? Well, not exactly. Jiro Dreams of Sushi (made by the same team behind Netflix’s Chef’s Table series) is a gentle, meditative, and entrancing portrait of Jiro Ono, considered possibly the greatest sushi chef in the world. He’s been making sushi for a long time in his small, exquisite restaurant, which is inside a subway station in Tokyo. It’s a story of true dedication to art, as well as the pressure his sons feel to follow in their father’s footsteps. Order some tuna rolls beforehand and make an evening of it.

How to watch it: Jiro Dreams of Sushi is available to digitally rent or purchase on iTunes, Amazon, YouTube, Google Play, or Vudu.

Meryl Streep as Julia Child may go down as one of the best casting choices of the century, but the entirety of Julie & Julia — written and directed by Nora Ephron — is just as delightful. Amy Adams plays Julie Powell (on whose memoir the movie is based), who in 2002 has a stressful job answering phone calls about plans to rebuild the World Trade Center following the 9/11 terror attacks. She begins cooking (and blogging) through Julia Child’s classic cookbook Mastering the Art of French Cooking, much to the amusement of her supportive husband (Chris Messina). The film cuts between 2002 and the 1950s, when Child and her husband Paul (Stanley Tucci) are in France, and Child is just learning to cook. The result is a movie about marriage, love, and the healing power of food, and its feeling runs deeper than its chipper exterior initially suggests.

How to watch it: Julie & Julia is streaming for free (with ads) on Amazon and for subscribers on Hulu with the Showtime add-on subscription. It’s also available to digitally rent or purchase on iTunes, Amazon, YouTube, Google Play, and Vudu.

If you’re looking for an unpretentious, outside-the-box romance, try …
The Lunchbox (2013)

The Lunchbox is a gentle romance between two people who communicate through food. Ila (Nimrat Kaur) is trying to rekindle her husband’s love for her by sending him sumptuous lunches at work. When the courier screws up, Saajan Fernandes (Irrfan Khan) becomes the accidental recipient of one of these meals and starts to wonder about the cook behind it. When they both realize the mistake, they start sending small notes to one another, and a friendship that fills both their lonely hearts begins to blossom. Not only is The Lunchbox a sweet film, but it’s a delicious one; be sure to have your favorite biryani or saag paneer on hand, or your stomach will be growling.

How to watch it: The Lunchbox is available to digitally rent or purchase on iTunes, Amazon, YouTube, Google Play, and Vudu.

For a kinky, brilliant reminder of food’s place in our domestic lives …
Watch Phantom Thread (2017)

Phantom Thread masquerades as a film about fashion, but everybody who’s seen it knows it’s really about food. That’s clear from the start: The central romance’s meet-cute occurs in a hotel restaurant, in which Daniel Day-Lewis (playing finicky couture designer Reynolds Woodcock) orders a legendary meal of “Welsh rabbit with a poached egg, bacon, scones, butter, cream, jam, a pot of lapsang souchong tea. And some sausages.” And once you’ve seen the movie, you’ll never look at a mushroom omelet the same way again.

How to watch it: Phantom Thread is available to digitally rent or purchase on iTunes, Amazon, YouTube, Google Play, and Vudu.

Ratatouille is the tale of Remy the Rat, who wants to be a chef but is, well, a rat. Yet through a series of unlikely events, he becomes a chef in the kitchen of an upscale Paris restaurant. As much a reminder of the power of criticism as the power of art, Ratatouille boasts some memorable meals, and an indelible scene in which Remy — trying to coax his fellow rats into actually tasting their food — experiences a true fantasia of flavor, rendered in visual form. It’s a delight to return to again and again.

How to watch it: Ratatouille is available for subscribers to stream on Disney+. It’s also available to digitally rent or purchase on iTunes, Amazon, YouTube, Google Play, or Vudu.

5 more movies to please your palate and whet your appetite …

Trump’s demand for Ginsburg and Sotomayor to recuse themselves, briefly explained
4 reasons we’re seeing these worrying coronavirus variants now
How the Oscars industrial complex makes the Oscars less diverse
Nunes keeps referring to the impeachment hearing as a “drug deal.” It’s not as clever as he thinks.
Demand grows for Kentucky AG to release the grand jury report in the Breonna Taylor case
The real danger to birds isn’t windmills — it’s cats and Trump