A disgraced evangelical leader returns to ministry after #MeToo. He won’t be the last. 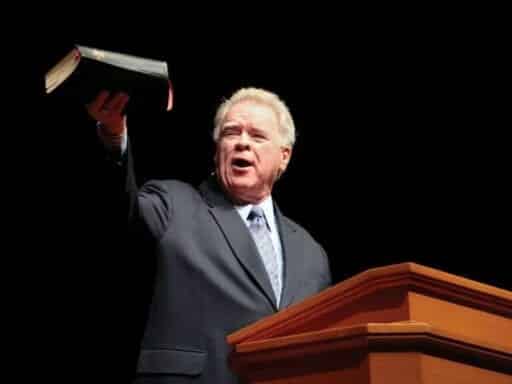 Paige Patterson gave a sermon about a false rape accusation.

Public disgrace has a short shelf life. Less than a year after sexual assault and rape allegations against Harvey Weinstein heralded a wave of accusations of sexual misconduct against men in power, Louis C.K. is once more performing comedy sets. Matt Lauer is talking about returning to television.

Men are returning to the boardroom, to the film set, to the stage.

And some are returning to the pulpit.

Over the weekend, Paige Patterson gave a pair of sermons at an evangelical revival meeting in Pisgah, Alabama. In those sermons, he once again displayed the qualities that had made him so controversial: body-shaming a relative of a former member of his congregation and speaking dismissively about women making false abuse allegations in the #MeToo age.

In May, Patterson — the influential former president of the Southern Baptist Convention and then-president of the prestigious Southwestern Theological Seminary — was removed from his academic post over sexist comments he’d made throughout his career, which came to light in April.

Among other things, Patterson was accused of telling a victim of domestic abuse to stay with and forgive her husband, encouraging a rape victim not to come forward, and telling jokes in sermons that sexualized teenaged girls. Initially, Patterson apologized for his tone but argued, “I do not apologize for my stand for the family and for seeking to mend a marriage through forgiveness rather than divorce.”

After the controversy intensified, Patterson wrote an open letter to Southern Baptists, saying, “Recently, I have been accused, publicly and privately, of a number of things — none of which I acknowledge as having done in the way portrayed.” He acknowledged making “a poor choice of words” in some instances, but argued that overall, “my words, demeanor, sentiments, or disposition” had been “twisted” by inimical gossip.

Patterson’s remarks over the weekend suggest that the changes #MeToo have heralded in the church might be merely illusory. Entrenched patriarchal attitudes, combined with an evangelical culture of forgiveness that often minimizes sexual misconduct or abuse, may make more “comebacks” like Patterson’s likely within the evangelical community.

Patterson is not the only evangelical leader to have left his position in disgrace since the rise of #MeToo. Last winter, Pastor Andy Savage stepped down from his post after decades-old revelations surfaced that he’d assaulted a former underage parishioner while working as a youth pastor. Later that spring, prominent Willow Creek Pastor Bill Hybels stepped down following numerous accounts of sexual misconduct with church employees over several decades. But Patterson’s return to ministry suggests that others’ reemergence may not be far behind.

In his first sermon, Patterson described sharing the gospel with a mother of a church member. He made several references to the woman’s size for comedic effect, including telling his audience how she “filled the door” when he came to visit her, and how when she came to be baptized, church leaders had to “fill the baptistery half full.”

He continued to highlight her appearance throughout his sermon, adding that “she was not just fat … I think she pumped iron probably an hour or so a day. … She literally could have played guard for the Green Bay Packers.”

In his second sermon, Patterson cast doubt on the veracity of some of the #MeToo accusers. He structured his sermon around the story of Joseph and the pharaoh’s wife from the biblical book of Genesis. In that story, the pharaoh’s wife fabricates a rape claim in retribution for Joseph’s refusal of her romantic advances. Patterson brought up #MeToo directly, telling his audience “I’m all in favor of the #MeToo movement when there is a guilty party. … By the same token, I have nothing good to say about a woman who falsely accuses a man. She runs the risk of ruining a life. She runs the risk of causing sorrow unknown when the person is, in fact, innocent.”

Patterson’s remarks — and the alacrity with which he has returned to public life — have angered some members of the Southern Baptist community.

Kelsey Hensley, a Southern Baptist who signed a petition demanding Patterson’s resignation when the allegations surfaced earlier this spring, told Vox in an email that she thinks it’s clear from his words that “repentance has not taken root.”

She added, “The quotes from Dr. Patterson surpass the category of tone-deaf. His remarks sound more like an apologetic for himself than for the God of the scriptures he claims to teach. He has further opened up the victims of sexual abuse to scrutiny instead of support. … Dr. Patterson fills his pulpit with a hubris that threatens to harm its most vulnerable members. The hope of the women who signed the petition wasn’t simply that he would be held accountable by others, but that he would also hold himself accountable to his own sin.”

Karen Swallow Prior, a professor at the evangelical Liberty University who also signed the petition, criticized not just Patterson but the wider evangelical patriarchal culture. “Much of Patterson’s thinking and preaching style reflects an old culture that is passing, a culture that is much bigger than just one person,” she wrote in an email. “Patterson needs what we all need in changing old, harmful habits: accountability and encouragement to change. This is the job of the entire church.”

But that change in culture may be a long time coming. The seeming ease with which Patterson has returned to ministry — and the comfort he seemed to feel in repeating the behaviors that attracted criticism in the first place — suggests that more returns to public life and ministry will not be far behind.

The new Supreme Court term starts next week. Expect fireworks on abortion, LGBTQ rights, and immigra...
This week in TikTok: When doctors and nurses go viral
Democrats are fed up with Facebook
Trump’s latest impeachment defense is fabricating Pelosi quotes
It looks like the debate may have given Elizabeth Warren a slight boost in Nevada
Supreme Court nominee Brett Kavanaugh’s highly anticipated confirmation hearing, explained