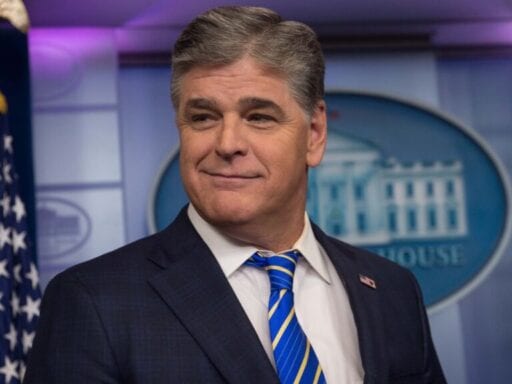 Throughout the coronavirus pandemic, media critics have warned that the decision from leading Fox News hosts to downplay the outbreak could cost lives. A new study provides statistical evidence that, in the case of Sean Hannity, that’s exactly what happened.

At the time, Hannity’s show was downplaying or ignoring the virus, while fellow Fox host Tucker Carlson was warning viewers about the disease’s risks.

Using both a poll of Fox News viewers over age 55 and publicly available data on television-watching patterns, they calculate that Fox viewers who watched Hannity rather than Carlson were less likely to adhere to social distancing rules, and that areas where more people watched Hannity relative to Carlson had higher local rates of infection and death.

This is a working paper; it hasn’t been peer reviewed or accepted for publication at a journal. However, it’s consistent with a wide body of research finding that media consumption in general, and Fox News viewership in particular, can have a pretty powerful effect on individual behavior.

Some of this research has found, for example, that TV consumption can affect decisions as intimate as whether or not to have children. It makes sense that an older American’s favorite TV host telling them they don’t need to worry about the coronavirus would cause them to ignore stay-at-home orders and care less about thoroughly washing their hands.

What’s more, the research design on this particular study seems quite rigorous, according to those scholars who have taken early looks.

“It’s a good paper; they took pains to control for many alternative explanations,” writes Zeynep Tufecki, a professor at the University of North Carolina who studies technology and research methods.

“This really looks like a causal effect of misinformation [leading] to deaths.”

How the study worked

The paper is technically quite complex, but it (more or less) breaks down into three parts.

First, the authors provide evidence that there was a difference in how Hannity and Carlson covered the coronavirus outbreak in February and early March. Second, they present data from their poll showing that Hannity viewers were less likely to follow social distancing rules than Carlson viewers. Third, they used data on television viewership and the coronavirus to show that higher rates of Hannity viewership relative to Carlson viewership were correlated with higher rates of local infection and death.

It’s pretty clear, from the first section, that Carlson took this way more seriously than Hannity. On February 25, Carlson warned that the virus could kill as many as a million Americans. On February 27, Hannity said it was less dangerous than car crashes or the common flu.

These are not cherry-picked examples. The authors, using both a data analysis of transcripts and a review of these transcripts by five paid staff, find systematic differences in how much the shows covered the coronavirus and how seriously they told their audiences to take it.

“Both anchors first discussed the coronavirus in late January when the first US case was reported, but Carlson continued to discuss the subject extensively throughout February while Hannity did not again mention it on his show until the end of the month,” they write. “While Hannity discussed the coronavirus as frequently as Carlson during early March, he downplayed its seriousness and accused Democrats of using it as a partisan tool to undermine the administration.”

These differences persist until mid-March, when Trump banned travel from Europe and declared a state of emergency. Around that time, Hannity started to sound a lot more like Carlson (though Hannity didn’t stay responsible all that long, while Carlson inveighed against social distancing in April and praised anti-distancing protestors).

Next, the researchers investigated if this difference in tone actually affected the way viewers of the two programs thought about coronavirus. To do so, they conducted a nationally representative survey of 1,045 Republicans aged 55 and up who reported watching Fox News at least once a week. They chose to study this demographic specifically because older Republicans were more likely to watch Fox and because older people in general are more vulnerable to the coronavirus.

In the survey, they ask viewers which shows they watched and how much they watched them. They also asked when, if it all, they started changing their behavior in response to the outbreak — things like canceling their vacation plans, doing social distancing, and washing their hands with increased frequency.

They then ran a regression analysis to see if behavior changes correlated with any viewership patterns. It turned out that, when compared to viewers of other Fox News shows, both Hannity and Carlson fans were distinct and statistically significant outliers.

The final part of the paper uses two different regression models to show that, in fact, there is good reason to believe that Hannity viewership did increase coronavirus deaths relative to Carlson viewership.

In the first model, they compare data on the two shows’ ratings in different areas to county-level data on coronavirus infections and deaths. Specifically, they compare Hannity viewership to coronavirus rates two weeks later — the time it would take for the virus to start presenting in virtually all infected, symptomatic individuals.

After controlling for a number of confounding variables, ranging from overall television viewership rates to demographic factors like race, they find a clear relationship: Areas with greater Hannity viewership had more cases and more deaths. This relationship weakened after Hannity changes his show’s tune in mid-March, suggesting that it is in fact the programming driving the changes.

To be clear, this doesn’t show that Hannity viewers are necessarily the ones getting sick and dying. It could be that they’re asymptomatic carriers, simply spreading the disease to others without suffering themselves. All this regression shows is that higher Hannity viewership in a particular area is correlated with higher coronavirus infection rates and deaths in that area.

It’s possible that there’s some hidden variable they couldn’t control for driving this effect, rather than the programming itself. Maybe there’s something about people who choose to watch Hannity rather than Carlson that makes them less likely to take social distancing seriously.

That’s where the second regression model comes in. It exploits a pattern the authors identified in television viewership: It tends to be highest 2.5 hours after the sun sets, regardless of what’s on the air. This makes sense: People like to be outside or doing other stuff during daylight hours, settle in at home to watch TV for a bit after the sun sets, and then tend to go to bed within a couple of hours.

Around the country, Carlson’s show is broadcast in the hour before Hannity’s. This sets up a random experiment: In counties where the sun sets earlier, Carlson viewership will be higher (and vice-versa when the sun sets later). This isn’t because people prefer Carlson to Hannity for any particular reason, but simply because they want to watch something on Fox and Carlson’s show happens to be on.

Studying this random pattern allows them to remove the possibility that it’s something about the kind of people who watch the shows, rather than the programing itself, that’s driving the results.

In a second regression incorporating the sunset data, focusing on media markets where Fox is popular while once again controlling for confounders, the relationship holds: Places where Hannity viewership is randomly higher than Carlson viewership tend to have higher rates of infection and deaths.

“Greater exposure to Hannity relative to Tucker Carlson Tonight increased the number of total cases and deaths in the initial stages of the coronavirus pandemic,” the authors conclude. “Our findings indicate that provision of misinformation in the early stages of a pandemic can have important consequences for health outcomes.”

Why the finding that Sean Hannity killed people is disturbingly plausible

It’s important to be cautious about drawing sweeping conclusions from this paper, for two broad reasons.

Because the study only looked at Fox viewers, it’s difficult to draw conclusions about the network’s effect more broadly. In theory, mainstream media’s more serious tone in February should mean that switching between it and Carlson would have little effect on a news consumer’s behavior and health — but choosing to watch Hannity rather than a mainstream source would have a large one. That’s really just a guess, though; there’s no direct evidence for this in the paper itself.

Second, drawing sweeping conclusions from one paper is always a bad idea. The social sciences in particular are notoriously difficult, dealing with complex phenomenon using imperfect data. The fact that this study hasn’t been formally peer reviewed means that, despite its impressive design and positive reviews from scholars who have read it so far, you should be especially cautious.

These caveats aside, there are several reasons to think that the conclusion in this paper is at least close to the truth.

First, we know that the response to the coronavirus has been deeply affected by partisan attitudes. Polls and regression analyses consistently find that Republicans are considerably less likely than Democrats to embrace social distancing measures, seemingly as a result of the overall partisan debate over the issues.

Given Fox News’ overwhelming popularity among Republicans, it’s at least plausible that some of this effect comes from Hannity and other coronavirus skeptics on the network (Carlson’s early programming was an outlier).

Second, we know that Fox News in general has powerful effects on American political behavior.

A 2007 study on Fox News’ initial rollout found that areas where the channel was available showed much better results for Republicans in both the 2000 presidential and Senate elections. The effect was significant enough to have swung the entire presidential election given the razor-thin margin separating Bush and Gore.

If Fox News can affect the way Americans vote, it’s at least plausible to say that it might affect the way they approach a novel and confusing pandemic.

Third, television in general appears to affect the way people make decisions about their health. One particularly interesting study looked at the popularity of Brazilian soap operas (novelas) on fertility. These shows tended to feature women with one child or none at all; the study’s authors found that, as these shows became more popular, the fertility rate of Brazilian women tended to fall. This does not appear to be an accident.

“Decreases in fertility were stronger in years immediately following novelas that portrayed messages of upward social mobility,” the authors write. “The effect … in any given year was stronger for women whose age was closer to that of the main female characters portrayed that year.”

It seems that people really do see media as a guide to some of their most intimate life choices. Given how much a certain segment of older, white, conservative Americans trust Fox, it seems very plausible that they took cues from their favorite anchors on how to handle the coronavirus outbreak.

For some Americans, that choice may well have been a fatal one.