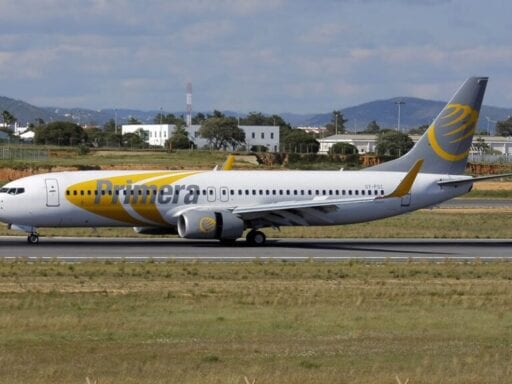 You can’t miss your flight if it never shows up — something Primera Air flyers experienced when the airline announced bankruptcy on October 1, leaving ticket holders stranded at the airport, many of which were awaiting trans-Atlantic flights.

One woman at the Washington Dulles International Airport told the New York Times that she was awaiting a Primera flight that would take her home to Britain when she found out the airline was shuttering, and no Primera staff were at the front desk to field questions. Another ticket holder in Paris was on his way to Newark when the announcement was made. He said Primera staff at the Charles de Gaulle Airport seemed confused by the situation as well, and apparently no one at headquarters was answering the desk attendants’ calls.

Although this image of chaos is specific to Primera’s sudden closure, the shuttering of small airlines has been a common occurrence lately. The Swiss airline SkyWork, which primarily offered service in Europe, filed for bankruptcy in August citing “over-indebtedness.” The Belgian airline VLM decided to liquidate in August. And when Air Berlin went bankrupt last year, Small Planet Airlines attempted to fill that hole in the market, but last month the airline announced it will be restructuring.

The more budget airlines expand their services, providing longer and longer flights, the more precarious they become — extending flights comes with its own set of costs and obstacles, and cutting corners just isn’t as possible. But does the death of a budget airline have to do with expanding too quickly, or do the obstacles that plague all airlines simply affect budget airlines the most?

Even big airlines today are perceived as ready to nickel-and-dime customers for just about anything, from baggage to seat assignments to wifi. Despite efforts to cut costs, though, they are still suffering financially. According to the International Air Transport Association, airline profits will be 12 percent lower this year than they were in 2017.

This struggle is mainly due to rising oil prices. Fuel accounts for 17 to 22 percent of an aircraft’s operation costs, and the price of jet fuel has gone up 50 percent in the past year. Earlier in the year, American Airlines cut its profit forecast by $2 billion, citing high oil prices. Delta did the same in June. All airlines are struggling to keep up with fuel prices, and low-fare carriers are not immune to that.

European budget airlines also face the challenges of restructuring a business model. Historically, European flights were sold through tour operators, a lot like bus tickets. But when tour operators became obsolete, airlines had to restructure. That is why Monarch and Air Berlin no longer exist.

Budget airlines also don’t attract as much of the corporate traveler market, which spends the most money on flights. “The bet they are taking is that they can make up for that corporate market revenue by filling the plane with more passengers and getting passengers to buy additional services,” aviation economics expert and senior vice president of ICF Aviation Samuel Engel told Vox. The only airlines that are successfully doing long-haul flights for low fares are Norwegian and Wow Air.

Primera Air, however, was in a uniquely bad situation. The airline had 15 aircraft when it declared bankruptcy. Having such a small fleet makes expanding into the long-haul market a more expensive venture.

“It adds to your risk,” Engel says. “You have less capacity to absorb the ups and downs of the business.” He says that if you sell a flight with only 30 seats filled, you can’t cancel, you just have to shoulder the cost of flying only 30 people across the Atlantic. Eating that cost may be easier for an airline with hundreds of other planes in the air. Small fleets also have very little capacity to deal with delay or disruptions.

So although Primera was an ill-fated attempt to crack the long-haul, low-fare flight, the question remains: Can the business model ultimately ever work? Or should we all prepare for the possibility of being stranded at the airport?

Trump reduced fines for nursing homes that put residents at risk. Then Covid-19 happened.
Republicans are using a pandemic to push anti-abortion and anti-trans agendas
What’s next for Trump’s Senate impeachment trial
Women donate to multiple candidates. But men tend to stick to people who look like them.
A bait-and-switch scam ran unchecked on Airbnb. Here’s how it worked.
USA Gymnastics has a new president. Her former employer helped protect serial sex abuser Larry Nassa...