A faint, beautiful interstellar comet is whizzing by the Earth 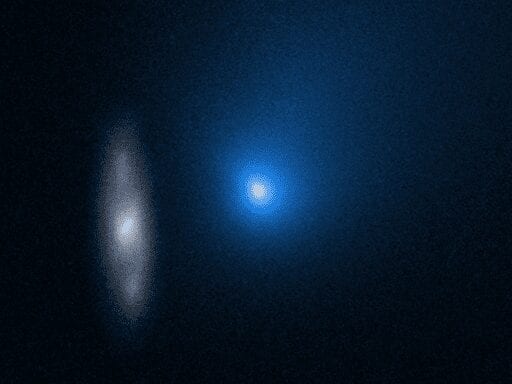 The Hubble Space telescope recently captured the alien visitor, which is moving at around 100,000 mph.

It came from beyond.

This is a Hubble Space Telescope image of a comet that is passing through our solar system. It was born around a star that is not our own, then flung off into space by some unknown cataclysm.

But it’s not here to stay. It’s moving at around 100,000 mph, which is much too fast for even our mighty sun to capture it in its orbit. (For reference, Voyager 1, the spacecraft that’s has left our solar system, is traveling at around 35,000 mph.) The comet, named 2I/Borisov, is only the second interstellar object recorded in our solar system. The first, a cigar-shaped rock (also probably a comet of sorts), named Oumuamua was discovered in 2017.

The above image was taken on November 16. The bright blue object in the center is the comet, approximately 203 million miles away from the Earth. The smudgy object to the left of it is actually a spiral galaxy 390 million light-years in the background. (How’s that for an extreme contrast in scale? The core of the comet is probably less than a mile wide.)

Here’s another image of the comet, from Hubble, shortly after its closest approach to the sun on December 9, when it was 185 million miles away.

The comet was first spotted in August while it was on its way into our solar system. That gives astronomers a long time to observe this rare object. They’ve been watching it since it was discovered. And already, they’ve made some small discoveries.

Namely: They discovered 2I/Borisov looks a lot like comets that form in our own solar system. It’s a tiny ball of ice and rock that exudes vapor when warmed by the sun. That is “evidence that comets also form around other stars,” NASA relays. It’s simple, but something scientists don’t take for granted.

2I/Borisov is the second interstellar object to be recorded entering our solar neighborhood. The first, Oumuamua, was discovered while it was exiting our solar system, and astronomers only could study it for a short window of time. (Those studies led to some wild speculation that Oumuamua was an alien spaceship. To be clear: It very most likely was not.)

In the future, astronomers hope to spot more and more of these interstellar visitors. They’re hard to find because they’re small and faint, and moving so quickly. But our telescopes are growing sensitive. The more we see, the more we’ll understand how much our solar system is like, and unlike, the greater cosmos.

2I/Borisov, which is too faint to see without a telescope, will make its closest approach to Earth on December 28, before reaching Jupiter by the middle of 2020. Then it will keep going, going, until it’s gone.

John Bolton is in talks to testify in the impeachment inquiry
Trump improbably promises Congress will fix DACA if the Supreme Court strikes it down
Key Republican senators are sticking with McConnell on an impeachment trial plan — for now
Why tens of thousands of farmers are blocking roads into India’s capital city
It’s official: 2020 is the busiest Atlantic Hurricane Season on record
What the heck is going on with Tesla’s stock?