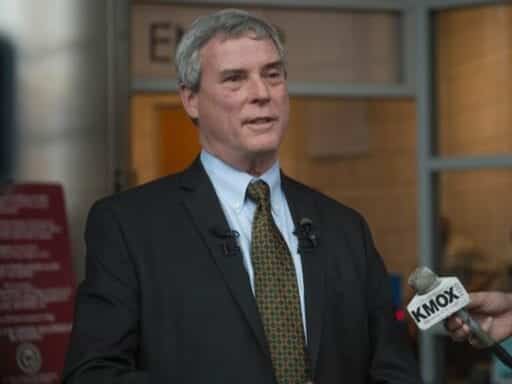 The election has big implications not just for police shootings but for criminal justice reform in general.

It’s been nearly four years since a police officer in Ferguson, Missouri, shot and killed Michael Brown, an unarmed black teenager — triggering weeks of protests that have culminated into the broader Black Lives Matter movement as we know it today.

Almost four years to the day since Brown’s shooting, the prosecutor who didn’t get an indictment against Darren Wilson, the cop who killed Brown, is on the ballot on Tuesday. And the Democratic primary challenge could be the most serious political threat he’s faced in the seven terms he’s served as St. Louis County prosecuting attorney.

Bob McCulloch, the incumbent, is facing a challenge from Wesley Bell, a Ferguson City Council member who has vowed to pursue criminal justice reform in a race that has drawn some national attention as part of the broader conversation about prosecutors’ powers, bail, and police accountability.

Much of the race is focused on McCulloch’s past handling of police shooting cases. Danny Wicentowski reported for the Riverfront Times:

There are plenty of people who are tired of McCulloch. Critics say his decision to conduct the investigation into Michael Brown’s fatal shooting using the grand jury was intentionally designed to produce a no-bill. McCulloch, 66, has also thrown the book at protesters, including those arrested as part of the recent demonstrations following the Jason Stockley “not guilty” verdict in St. Louis. Then there’s this: In his 27-year career in public office, McCulloch has never prosecuted an officer-involved shooting to the point of an actual indictment.

McCulloch still defends his handling of the Brown shooting. Bell, meanwhile, told the New York Times that he would do things differently, vowing in police shooting cases to appoint a special prosecutor and provide more data and transparency.

But Bell, who’s also served as a public defender, municipal prosecutor, and judge, said that his focus is not just on McCulloch but on reforming the St. Louis County prosecutor’s office in general. Wicentowski reported: “He wants to reform the county’s bail system, moving it to what he calls a ‘risk-based’ process rather than a ‘cash-based’ one. He also wants to expand the county’s drug courts and diversion programs — programs that he claims McCulloch ‘has never been committed to.’”

McCulloch, for his part, doesn’t seem receptive to the ideas. He told the Riverfront Times that he already set up a drug courts and diversions program. But on cash bail, he said that the issue gets too much attention — claiming, dubiously, that “[t]here’s nobody in St. Louis County in jail being held on a misdemeanor because they can’t make bond.” (Data from the American Civil Liberties Union suggests that dozens or even hundreds of people in St. Louis County are held on cash bail for misdemeanor charges for days or weeks in the course of a year.)

Bail reform has become a big topic nationally, previously drawing attention from comedian John Oliver on his HBO show. The typical bail system forces people to pay some amount of cash to get out of jail while awaiting trial — a system that favors the wealthy and keeps the poor in jail just because they can’t afford bail.

A will to change this system is reflective of just how reform-minded a prosecutor may be. But McCulloch seems to be running the same kind of campaign he’s run for decades — one focused on “law and order.”

The winner in Tuesday’s Democratic primary will likely go on to claim the office, as there is no Republican challenger in the general election.

In the past, these types of local elections haven’t gotten much attention. A previous study by Ronald Wright of Wake Forest University School of Law, looking at data for 10 states, found that about 95 percent of incumbent prosecutors — often supporters of old “tough on crime” and war on drugs–focused policies — won reelection when they sought it between 1996 and 2006.

But these local elections matter. Prosecutors are extremely powerful, given the ability to decide who goes to trial with few checks. Some research suggests that these local policymakers have been responsible for the continuation of mass incarceration in recent years.

That’s why criminal justice reformers, backed by major funders like George Soros, are now pouring time and money into prosecutor races to reshape the criminal justice system. They have already had major victories — including that of Larry Krasner in Philadelphia, whose staff, among several other reforms, declines to prosecute any marijuana possession case. If they get a victory in St. Louis County, it would be symbolic because of the police shooting of Michael Brown and could jump-start reforms in St. Louis County more generally.

Typically, discussions of the criminal justice system focus on lawmakers, prisons, the police, and maybe judges. Rarely, however, is the most powerful actor in this system mentioned: the prosecutor.

Prosecutors are enormously powerful in the US criminal justice system, in large part because they are given so much discretion to prosecute however they see fit. For example, former Brooklyn District Attorney Kenneth Thompson in 2014 announced that he would no longer enforce low-level marijuana arrests. Think about how this works: Pot is still illegal in New York state, but Brooklyn’s district attorney flat-out said that he would ignore an aspect of the law — and it’s completely within his discretion to do so.

We see this in police shooting cases. Prosecutors have the power to decide whether to bring charges against police officers, and are also given enormous power over grand juries to get an indictment (hence the saying that prosecutors can get grand juries to “indict a ham sandwich”) and in the courtroom generally. This is why Black Lives Matter activists view McCulloch’s inability to get an indictment against Wilson over the Michael Brown shooting so negatively: It’s widely believed that he could have gotten an indictment if he really tried.

Courts and juries do, in theory, act as checks on prosecutors. But in practice, they don’t: More than 90 percent of criminal convictions are resolved through a plea agreement, so by and large, prosecutors and defendants — not judges and juries — have almost all the say in the great majority of cases that result in incarceration or some other punishment.

As one example, prosecutors have played a major role in mass incarceration. Analyzing data from state judiciaries, John Pfaff, a criminal justice expert at Fordham University, compared the number of crimes, arrests, and prosecutions from 1994 to 2008. He found that reported violent and property crime fell, and arrests for almost all crimes also fell. But one thing went up: the number of felony cases filed in court.

Pfaff provided a real-world example of this kind of dynamic in his book Locked In: The True Causes of Mass Incarceration and How to Achieve Real Reform: “Take South Dakota, which in 2013 passed a reform bill that aimed to reduce prison populations. The law did lead to prison declines in 2014 and 2015, yet at the same time prosecutors responded by charging more people with generally low-level felonies, and over these two years total felony convictions rose by 25 percent.” In the long term, this could lead to even larger prison populations.

Now apply this story on a national scale. There is less crime compared to the 1990s. Police are making fewer arrests. Lawmakers are slowly reducing the length of prison sentences. Yet until 2010, incarceration rates had continued to climb nationwide — and, as Pfaff pointed out, the recent drop in incarceration would be much less pronounced if it weren’t for court-ordered drops in California’s prison population. Prosecutors have been abetting more and more incarceration while other actors in the system have been pulling back.

By successfully campaigning for progressive prosecutors, criminal justice reformers stand to change this dynamic. It’s crucial this happens at the local and state level too, where the majority of the criminal justice system takes shape in the US.

In criminal justice, it’s local and state systems that matter

Local races don’t typically get much national attention, especially with so much going on at the federal level. But it’s exactly because these races are local that they should matter a lot to anyone who’s interested in reversing mass incarceration.

Consider the statistics: According to the US Bureau of Justice Statistics, 87 percent of US prison inmates are held in state facilities (and most state inmates are in for violent crimes, not drug crimes). That doesn’t even account for local jails, where hundreds of thousands of people are held on a typical day in America. Just look at this chart from the Prison Policy Initiative, which shows both local jails and state prisons far outpacing the number of people incarcerated in federal prisons:

One way to think about this is what would happen if President Donald Trump used his pardon powers to their maximum potential — meaning he pardoned every single person in federal prison right now. That would push down America’s overall incarcerated population from about 2.1 million to about 1.9 million.

Similarly, almost all police work is done at the local and state level. There are about 18,000 police agencies in America, only a dozen or so of which are federal agencies.

While the federal government can incentivize states to adopt specific criminal justice policies, studies show that previous efforts, such as the 1994 federal crime law, had little to no impact. By and large, it seems local municipalities and states will only embrace federal incentives on criminal justice issues if they actually want to adopt the policies being encouraged.

AT&T is cutting jobs, but Trump is focused on its management of CNN instead
Sandra Bland recorded her traffic stop. The video is finally public, years after her death.
Watch: J. Lo and Shakira dazzled at the Super Bowl halftime show
Twitter, Microsoft, LinkedIn, and other companies are calling for an end to Trump’s rule to keep out...
US mobile speeds are super slow. Here’s what we can do about it.
America’s meat shortage is more serious than your missing hamburgers