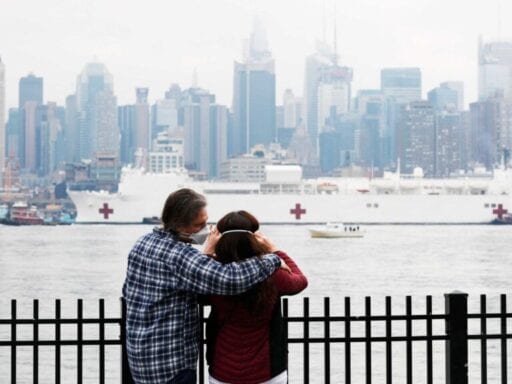 Here’s what to know today.

The United States continues to record far and away the most novel coronavirus cases worldwide, with more than 164,000 as of March 31. New York City, still the epicenter of the country’s outbreak, saw the US Navy hospital ship Comfort pull into Pier 90 on Manhattan’s west side on Monday, and a new field hospital is set to open Tuesday in Central Park.

The crisis in the United States is forcing the Centers for Disease Control and Prevention (CDC) to rethink its guidelines on healthy people wearing masks. However, the continuing shortage of the more advanced N95 respirator masks, which health care professionals need to care for infected people, means people will have to make do with disposable paper surgical masks or makeshift coverings like scarves.

Worldwide, the number of coronavirus cases has now surpassed 800,000. On Tuesday, China announced more than 1,500 coronavirus cases that had previously not been made public, raising more questions about the veracity of Beijing’s data around the coronavirus.

On Monday, the naval hospital ship, the USNS Comfort, docked on Manhattan’s West Side, offering the promise of 1,000 beds to the New York City’s overwhelmed hospitals. The last time it docked in New York’s harbors was in the aftermath of the terror attacks of September 11, 2001. The Comfort’s predecessor also treated overflow patients in New York during the 1918 influenza pandemic.

“Our nation has heard our plea for help here in New York City,” Mayor Bill de Blasio said Monday. “There could not be a better example of all of America pulling for New York City than the arrival of the USNS Comfort.”

In Manhattan’s Central Park, Mount Sinai Health Systems and Samaritan’s Purse, an evangelical Christian aid group, erected a field hospital to serve about 68 overflow patients in the East Meadow. During the Civil War, Central Park also hosted a hospital to treat wounded soldiers. The Jacob Javits Convention Center on the far west side of Manhattan, and the Billie Jean National Tennis Center, where the US Open is played in Queens, will also be turned into makeshift hospitals.

CDC is reconsidering its guidance on masks

Health care professionals on the front lines are facing a dire shortage of protective equipment, and it’s still necessary to preserve vital gear like N95 respirator masks for them. But the CDC is rethinking its guidance on whether healthy people should wear other kinds of face coverings as an additional precaution, according to the Washington Post.

Nothing has been finalized yet, but they could soon begin recommending that people wear disposable paper surgical masks, scarves, and other DIY face coverings to help slow the spread.

Other countries, including those in Asia, have mandated masks be worn in public, and some Western countries, including Germany, are considering face coverings as part of a broader plan to scale down lockdown measures. The US isn’t there yet, but there’s a chance masks may soon become yet another recommended tool to slow the spread of the virus in the country.

Starting Wednesday, China will begin including asymptomatic carriers in its public statistics on novel coronavirus cases in the country, according to the South China Morning Post. Previously, Chinese officials had to report and monitor these cases, but they were not included in the government statistics.

On Tuesday, the Chinese government reported more than 1,500 cases of people who had tested positive but were asymptomatic — cases that had previously not been made public.

But the numbers may be much higher than that.

The South China Morning Post estimated there could be as many as 43,000 cases of people who tested positive but didn’t have symptoms. China has currently recorded more than 82,000 confirmed cases in total.

Early on in the Covid-19 outbreak, which began in Wuhan, China, the Chinese government actively covered up evidence of the growing epidemic. Since then, experts have questioned whether China is being forthright in its reporting on the number of cases and deaths in the country.

China’s government eventually took extreme measures to lock down the country and try to slow the spread of the virus, but Beijing’s lack of transparency has complicated how the world evaluates its success.

Sports are still canceled, so we’ll have to entertain ourselves with this turtle “dribbling” a basketball. He’s good at it though, look at this turtle!

5 days out of his winter hibernation & Hurricane is getting into his garden lockdown football exercise this morning…he’ll be posting his boxercise routine & tomorrow!
#teacher5aday #exercise #notice pic.twitter.com/xUMGL6h5ya

This climate problem is bigger than cars and much harder to solve
Vox Sentences: Notre Dame in flames
Parasite absolutely deserved to win Best Picture. I didn’t think it could.
Drake’s new album Scorpion matches Springsteen and surpasses Taylor Swift on the charts
2020 was supposed to be a big year for marijuana legalization. Then coronavirus happened.
The species the world lost this decade