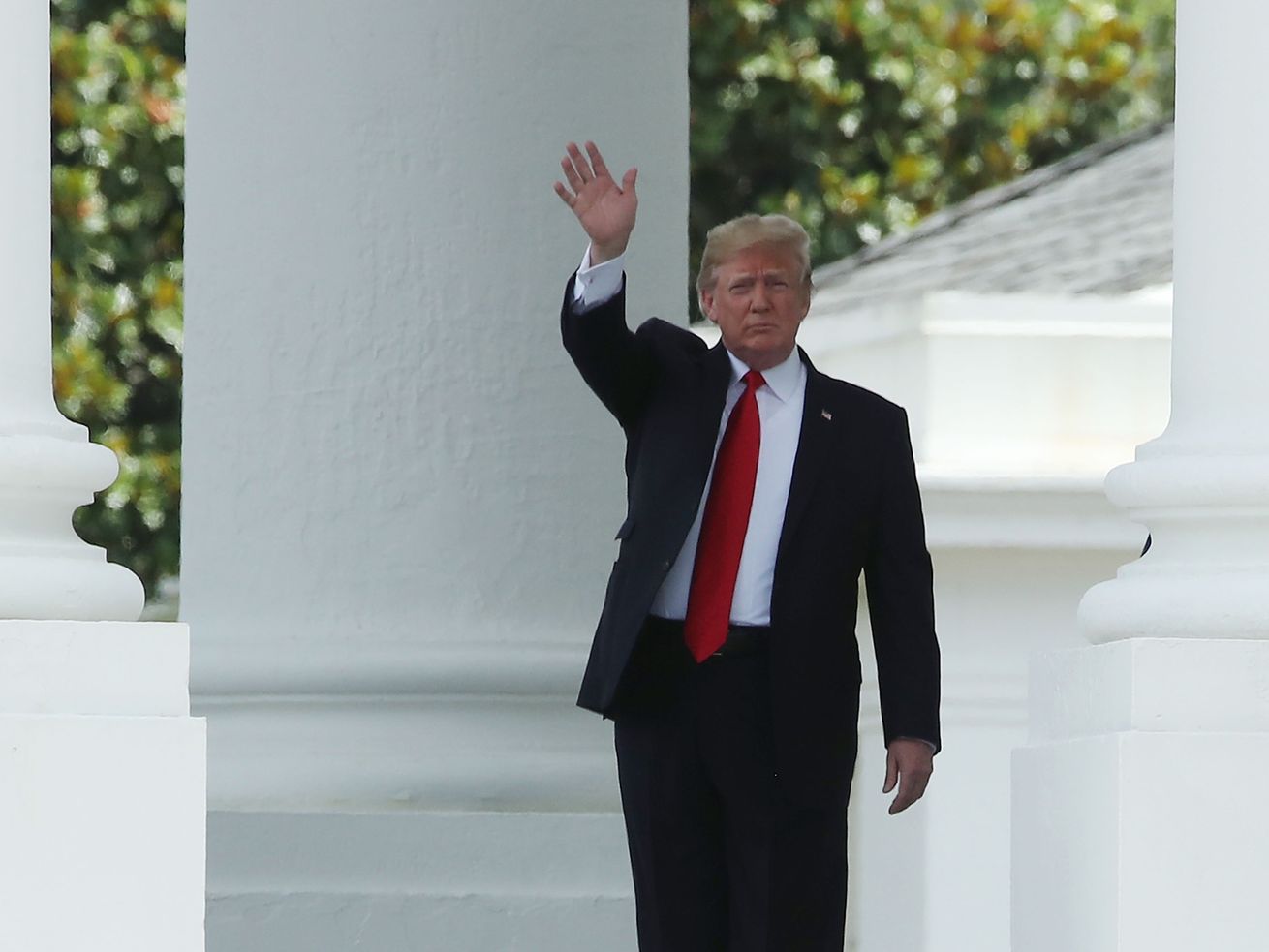 He’s expected to meet with Prime Minister Theresa May on July 13.

President Donald Trump is going to the United Kingdom next week — a trip he’s been canceling and rescheduling for months over worries over massive protests.

Massive demonstrations are still expected when the US president gets into town on July 13. One will include a huge balloon of Trump’s likeness floating across the London skyline — wearing a diaper.

HUGE news coming in: DONALD J TRUMP BABY WILL FLY! @SadiqKhan tried to play hard ball – in the end he had to make a Deal. No surprise – he’s never won anything in his life! Sad – but True! London here I come! https://t.co/j3KCPimHI2 pic.twitter.com/oc2VKWKSN1

The 19-foot “Trump Baby” balloon, which will fly for two hours during the president’s visit, is just the latest development in a visit that’s been filled with diplomatic rough patches. Trump doesn’t get a full state visit, nor will he address Parliament — a typical honor for a visiting world leader.

The balloon is just one part of demonstrations that are expected to attract thousands of people. London Mayor Sadiq Khan approved the flight of the Trump balloon, after more than 10,000 people signed a petition. The creators of Trump Baby also raised about 18,000 pounds — more than $23,000 — through a crowdfunding campaign.

“The Mayor supports the right to peaceful protest and understands that this can take many different forms,” Mayor Khan said in a statement, according to CNN. “His city operations team have met with the organizers and have given them permission to use Parliament Square Garden as a grounding point for the blimp.”

The balloon will be tethered to the ground in Parliament Square Gardens in London, according to the BBC, taunting Trump from about 98 feet in the air.

The National Air Traffic Service (NATS) and Metropolitan Police also have to grant approvals, so “Trump Baby” is not a totally done deal yet.

Some have pushed back on the ballon plan. UKIP leader Nigel Farage called it the “biggest insult to a sitting US President ever.”

But Leo Murray, who birthed “Trump Baby,” defended his very specific protest idea in a column in Metro:

So it’s on everyone who knows the difference between right and wrong to resist this grotesque excuse for a president when he comes here. He needs to be run out of town, figuratively at least. But how? This is a man who lacks the capacity for moral shame. Liberal outrage just makes him smirk harder.

To really get through to Trump, you have to get down on his level and talk to him in a language he understands: personal insults.

Trump finally faces the London protests he wanted to avoid

UK Prime Minister Theresa May visited the White House in January 2017, the first foreign leader to call on Trump. At the time, May had asked Trump to the United Kingdom for a state visit — but the invitation was met with outspoken protests among members of Parliament and the general public.

Trump was also reluctant to visit because of fears of mass protests. He was finally supposed to make the trip at the beginning of 2018 to open the new US embassy in London, but — once again facing the prospect of protests — begged off with the excuse that he wouldn’t go to any ribbon-cutting because the Obama administration had made a “bad deal” on the embassy. (The move, done for security reasons, was initiated under the George W. Bush administration.)

Now, Trump will finally meet with May on July 13, but he won’t get the official state visit treatment afforded past leaders in the other half of this increasingly strained “special relationship.” But he’ll still get to meet the queen.

Even though the visit has been downgraded, protests are still planned. While Trump may have hoped that postponing his visit would help, the events of the past months have likely generated only more animosity for the US president.

Tensions began building after a terrorist attack in London last June. Trump lashed out at London Mayor Sadiq Khan, accusing him of saying there was no reason to be alarmed about a terror attack.

Trump had taken Khan out of context; he was assuring his constituents not to worry about the increased police presence. Khan’s spokesperson responded that he had more important things to do than respond to Trump’s “ill-informed tweet,” which only made Trump send out another angry tweet, claiming Khan gave a “pathetic excuse” on his original statement.

In the wake of Trump’s comments, Khan had called on May to cancel Trump’s state visit.

Trump also attacked May herself after she criticized his retweets of anti-Muslim propaganda videos from a British hate group. Many British leaders, including Khan, condemned Trump. May released a statement denouncing the group that had first posted the videos and the “use of hateful narratives that peddle lies and stoke tensions.”

“It is wrong for the president to have done this,” May added.

Trump responded on Twitter, telling her to “focus on the destructive Radical Islamic Terrorism” within the UK.

.@Theresa_May, don’t focus on me, focus on the destructive Radical Islamic Terrorism that is taking place within the United Kingdom. We are doing just fine!

Beyond these very public feuds, relations have been strained with all of America’s allies, particularly following Trump’s tense meeting at the G7 in June and his decision to move ahead with steel and aluminum tariffs. Trump will attend a NATO summit in Brussels before arriving for his meeting with May in London — meaning there’s plenty of time for more drama to unfold.

Watch John McCain defend Barack Obama against a racist voter in 2008
Your phone location is a goldmine of information — and every political candidate wants it
Poll: Most Americans won’t immediately venture out when social distancing ends
What happened to the formerly fearsome right-wing media troll?
1 man was shot amid competing rallies in Denver
Trump still '100 percent' behind House immigration bill, homeland security chairman says