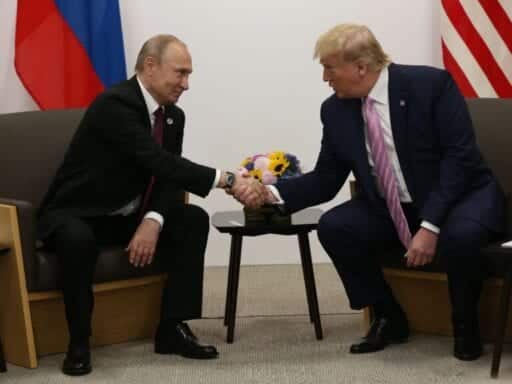 Share
Loading...
Russian President Vladimir Putin and US President Donald Trump shake hands in front of their nations’ flags ahead of a G20 meeting in Osaka, Japan, on June 28, 2019. | Mikhail Svetlov/Getty Images

Trump should really take a look at this Senate report. But he won’t.

The Republican-led Senate Intelligence Committee just released a report that states the obvious, but in these times is quite damning for President Donald Trump: Russia directed a disinformation campaign during the 2016 election to hurt Hillary Clinton and favor Trump.

The committee has spent three years conducting a bipartisan investigation into the extent of the Kremlin’s interference during the last presidential cycle. It released the first of its findings in July, showing that Moscow-linked hackers likely tried to access election systems in all 50 states.

On Tuesday, the Senate panel released its second set of conclusions focused on Russia’s use of social media during the last campaign season. What it discovered was what US intelligence agencies have long assessed: Trump was Russia’s favorite.

“The Committee found that the IRA sought to influence the 2016 US presidential election by harming Hillary Clinton’s chances of success and supporting Donald Trump at the direction of the Kremlin,” the report reads using an acronym for the Internet Research Agency, the name for the group of the Russian hackers.

They did this in multiple ways, according to the report. The IRA targeted African Americans more than any other group through Facebook pages, Instagram accounts, Twitter trends, and more. “By far, race and related issues were the preferred target of the information warfare campaign designed to divide the country in 2016,” the committee wrote. The IRA also got unwitting targets to hand over personal information, sign petitions, attend rallies, and even teach self-defense classes.

It makes sense why Russia would choose to weaponize anger around race. As my colleague P.R. Lockhart noted last December, race issues in 2016 could be exploited due to already existing tensions in the US that were amplified by Trump as a candidate. Russia’s efforts later evolved into attempts to influence racial justice activism after the election, as Russian groups contacted black activists running legitimate organizations and attempted to set up real-world events.

That’s just awful. But what’s arguably worse is that Russia may continue to do this.

“Russia is waging an information warfare campaign against the US that didn’t start and didn’t end with the 2016 election,” Sen. Richard Burr (R-NC), the committee chair, said in a statement concurrent with the report’s release. “Their goal is broader: to sow societal discord and erode public confidence in the machinery of government.”

This is terribly inconvenient timing for Trump. He’s embroiled in an impeachment crisis started in part because he believes Ukraine — not Russia — greatly interfered in the 2016 election to help Clinton win. While there is some evidence to suggest Ukrainians did favor Clinton, there’s none showing they went to the lengths that the Russians did or were anywhere near as effective.

Which means Trump has a major problem: Even GOP-led Senate panels clearly show he had help during the 2016 election. But the US writ large has problems, too. The report makes clear US elections are vulnerable to foreign influence, and so far there is little reason to suggest the next vote will be freer from interference than the 2016 contest was.

“With the 2020 elections on the horizon, there’s no doubt that bad actors will continue to try to weaponize the scale and reach of social media platforms to erode public confidence and foster chaos,” Sen. Mark Warner (D-VA), the top Democrat on the Senate Intelligence Committee, said in a Tuesday statement. “The Russian playbook is out in the open for other foreign and domestic adversaries to expand upon — and their techniques will only get more sophisticated.”

The question now is if Trump will suddenly have a change of heart, openly blame the Russians, and start to move the machinery of government to safeguard the 2020 election. The chances of that happening, though, are about as high as the chance Russia will stop meddling in American affairs: zero.

Rand Paul says he’s “honestly undecided” on Kavanaugh
8 experts on why the Paul Manafort jury doesn’t have a verdict yet — and what it might mean
Does the USA need a new national anthem?
Sen. Tim Scott on race, police reform, and why ending qualified immunity is a nonstarter for the GOP
The Fight explores how the ACLU is navigating the Trump era through 4 key cases
The past, present, and future of the singular “they”