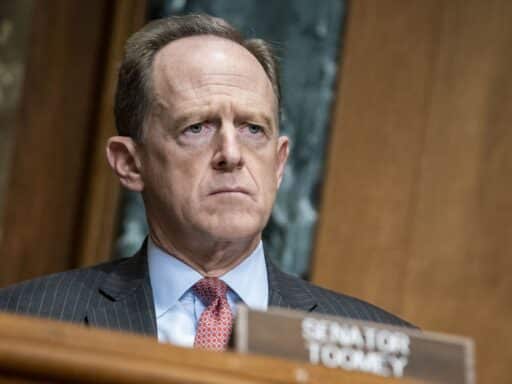 For the GOP, democracy is now up for debate.

In the wake of a Saturday announcement by 11 Republican senators that they plan to formally object to the results of the 2020 presidential election, the Senate GOP conference has descended into infighting over whether to get behind efforts to overturn the election.

Sens. Lisa Murkowski, Mitt Romney, and Pat Toomey all came out with strong statements pushing back against the doomed — but alarmingly undemocratic — scheme to reject Biden electors on Saturday.

“The egregious ploy to reject electors may enhance the political ambition of some, but dangerously threatens our Democratic Republic,” Romney said in his first public response to the plan Saturday. “The congressional power to reject electors is reserved for the most extreme and unusual circumstances. These are far from it.”

The effort — led by Texas Sen. Ted Cruz and backed by at least 10 other current and incoming Republican senators, some of whom were elected in the same election they are currently disputing — argues that Congress cannot certify President-elect Joe Biden’s victory, as it is scheduled to do on January 6, because “allegations of fraud and irregularities in the 2020 election exceed any in our lifetimes.” The senators also proposed “an emergency 10-day audit of the election returns in the disputed states.”

They join Missouri Sen. Josh Hawley, who was first to announce his plan to object to the certification of Pennsylvania’s electoral votes last week, and has so far led an internecine clash against colleagues like Toomey, who represents Pennsylvania in the Senate.

“Millions of voters concerned about election integrity deserve to be heard. I will object on January 6 on their behalf,” Hawley said on Twitter last month.

In response to a Toomey statement Saturday pointing out that Hawley and Cruz’s efforts stand in direct opposition to “the right of the people to elect their own leaders,” Hawley released a letter defending his decision and calling for his colleagues to “avoid putting word into each other’s mouths.”

“Instead of debating the issue of election integrity by press release, conference call, or email,” Hawley wrote, “Perhaps we could have a debate on the Senate floor for all of the American people to judge.”

Sen. Josh Hawley fires back after Sen. Pat Toomey and others raise concerns about his plans — along with at least 11 other GOP senators — to object to the electoral vote count when a joint session of Congress meets Jan. 6, per email sent to Senate GOP Conference tonight pic.twitter.com/8wRZaEKg18

Hawley’s statement — as well as that of Cruz and his allies — leaves out a few salient details, however.

Specifically, the “irregularities” they cite have been litigated at length, in Pennsylvania and every other battleground state in the country. In the two months since Election Day, President Donald Trump and his Republican allies have filed, and lost, at least 60 election-related lawsuits at all levels of the state and federal court systems alleging voter fraud and other improprieties, and they have failed to prove their case at every turn.

What’s more, recounts in battleground states like Georgia and Wisconsin — both won by Biden — have turned up no evidence of large-scale fraud or irregularities that could have affected the results of the election. And in all 50 states and Washington, DC, the election results have been carefully reviewed by state officials and certified as accurate.

All of the senators planning on objecting to certification do little to address where voters’ concerns about election integrity originate. As MSNBC’s Chris Hayes pointed out on Twitter Saturday, Republican leaders “spent months lying to people, telling them the election was stolen and now turn around and cite the fact that many people believe them as evidence!” The same is true of the unsubstantiated allegations brought by Hawley, Cruz, and the other signatories of Saturday’s statement.

They’ve spent months lying to people, telling them the election was stolen and now turn around and cite the fact that many people believe them as evidence! Incredible stuff. https://t.co/daCgCuZm0l

The back-and-forth between Toomey and Hawley highlights exactly how far the GOP has drifted. An ever-growing swath of the Republican Party, led by Hawley, Cruz, and Trump, appears to be perfectly willing to overturn the results of a free and fair election by rejecting Biden electors on January 6 — just as long as it allows their party to hold the White House.

Ultimately, it won’t work. Even were the plan to get universal Republican support — and statements by Murkowski, Romney, and Toomey, among others, demonstrate that it won’t — actually rejecting a state’s slate of electors requires a majority in both chambers of Congress, which the GOP lacks.

If at least one House member and one senator object to the results in any state, each chamber will hold a vote on the matter. For the objection to succeed, both the House and the Senate must vote in favor of it. Otherwise, it fails. (And since Democrats will control the new House, any objection to Biden’s win will surely fail in that chamber.)

Democrats will also hold 48 seats in the Senate on January 6 — meaning only three Republicans would have to refuse to participate in efforts to overturn the election in order to end any objection. And more than three Republican senators have registered their contempt for Hawley and Cruz’s scheme.

Consequently, the most Hawley and the Cruz coalition can achieve by objecting is a protracted certification process on January 6 ahead of President-elect Joe Biden’s January 20 inauguration.

Many GOP leaders are giving up on democracy

Futile though the GOP plan to hand Trump an unelected second term in office may be, it has found widespread acceptance throughout the party. Beyond the dozen Republican senators who have bought in, a sizable majority of the House GOP conference — as many as 140 members, according to Texas Rep. Louie Gohmert — also plans to participate in the effort.

And top Trump officials such as chief of staff Mark Meadows — a member of Congress until last year — are on board too.

“We’re now at well over 100 House members and a dozen Senators ready to stand up for election integrity and object to certification,” Meadows tweeted Saturday. “It’s time to fight back.”

We’re now at well over 100 House members and a dozen Senators ready to stand up for election integrity and object to certification.

It’s time to fight back.

None of this is new for Trump, of course. Even aside from the steady drumbeat of voter fraud allegations emanating from his Twitter feed since losing reelection, baseless fraud claims have been a favorite tactic of his in the face of defeat. In 2016, after losing the Iowa caucuses to then-presidential candidate Cruz, Trump tweeted “Ted Cruz didn’t win Iowa, he stole it. That is why all of the polls were so wrong and why he got far more votes than anticipated. Bad!”

Ted Cruz didn’t win Iowa, he stole it. That is why all of the polls were so wrong and why he got far more votes than anticipated. Bad!

From his perch in the White House, though, Trump has a much larger megaphone — and a base that’s more fervent than ever. While senators like Hawley and Cruz prepare to object to certification in Congress on January 6, Trump has been promoting a “Stop the Steal” rally in Washington, DC the same day. The event will be just the latest of a series pro-Trump protest since Election Day: The last major Washington protest took place in early December 2020, and resulted in at least four stabbings as violent hate groups like the Proud Boys descended on the city.

For Trump and his allies in Congress, however — some of whom are thought to have their eyes on a 2024 presidential run if Trump cedes the field — that kind of damage appears secondary.

“America is proud of Josh [Hawley] and the many others who are joining him,” Trump tweeted Thursday. “The USA cannot have fraudulent elections!”

Restaurants have turned to GoFundMe during the pandemic. They shouldn’t have to.
26 million US unemployed, 265 million worldwide at risk of hunger: Thursday’s coronavirus news
This filmmaker spent months interviewing neo-Nazis and jihadists. Here’s what she learned.
11 US troops were injured in Iran’s attack. It shows how close we came to war.
What Elizabeth Warren staying in the race means for Bernie Sanders and Joe Biden
“We are at a turning point”: The coronavirus outbreak is looking more like a pandemic