“A great day for 30 percent of America”: SNL takes on Trump’s acquittal in its cold open 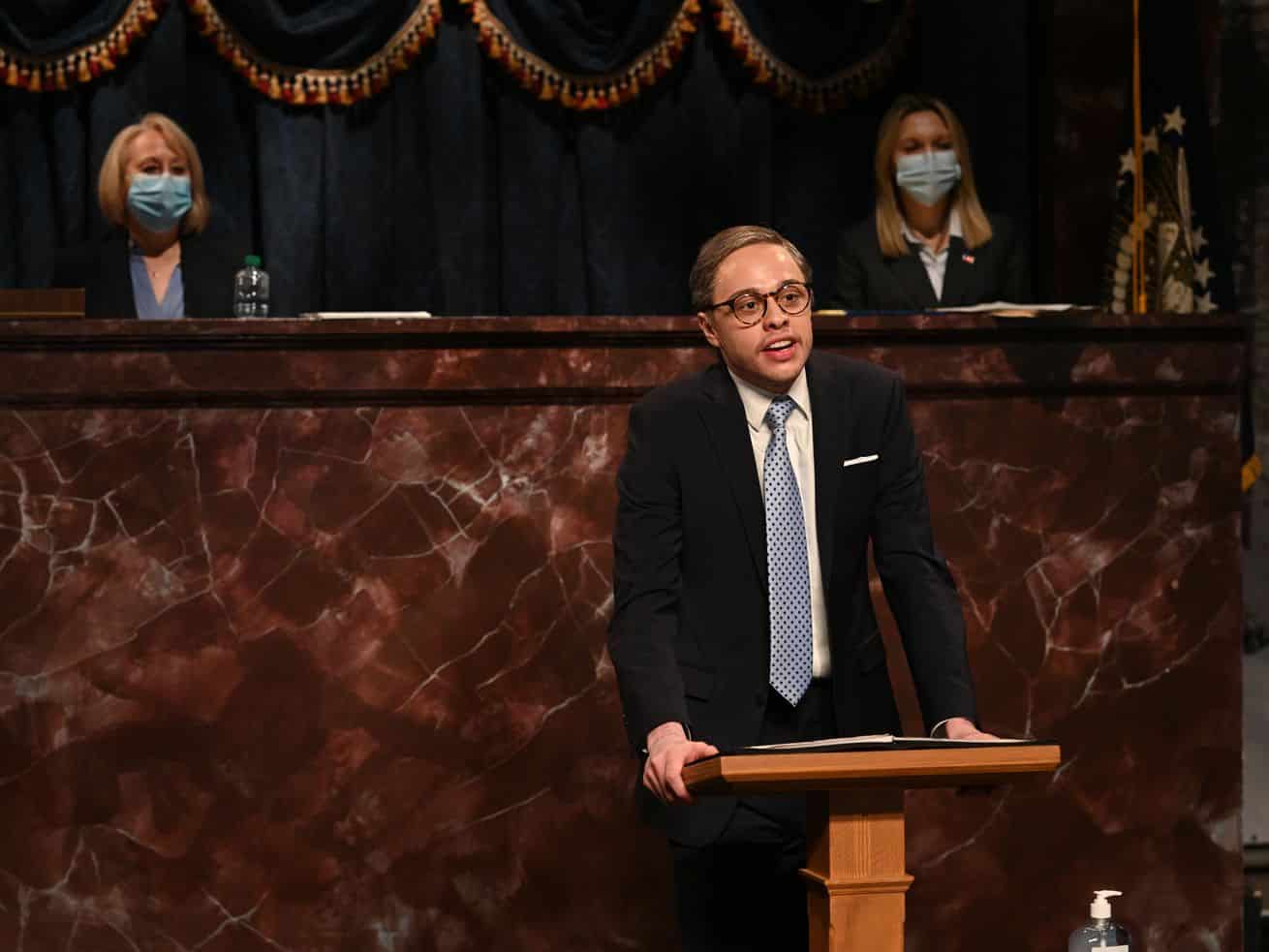 Beck Bennett’s Mitch McConnell tells us how he really feels about Trump.

The skit opened with Alex Moffat as Fox News host Tucker Carlson, who compares himself to a “human White Claw” and announces he’ll open his show with “a loose collection of scaremongering nonsequiturs.”

“Is AOC hiding in your house right now?” Moffat asks. “Wouldn’t put it past her.”

The impeachment trial concluded Saturday with 57 guilty votes — the most bipartisan verdict in history — but fell short of the two-thirds majority that would have been necessary to convict Trump, something celebrated by McKinnon’s Graham.

“It’s a great day for 30 percent of America,” McKinnon says in the skit, dancing on camera. “The trial is over and now we can move past this and focus on the serious issues, that’s locking up Hillary and freeing beautiful Britney Spears.”

McKinnon also goes to bat for Trump — telling Moffat, “He is smart. He is nice. He’s in shape … last fall he died of Covid and didn’t even tell nobody,” — before pulling Graham’s Senate colleague, Sen. Ted Cruz, into frame to join the interview.

Cruz, played by Aidy Bryant, is identified on screen by a chyron describing her as “Sen. Ted Cruz; Trump said ‘wife ugly.’”

“I think she’s beautiful,” Bryant says in response to the description, “But since Trump is the boss, sorry honey, ya busted.”

In 2016, Trump repeatedly attacked Cruz’s wife, Heidi, while both Cruz and Trump were still candidates for the Republican presidential nomination.

The skit needled several real-world stumbles by the pair, including Castor’s accidentally mislabeling himself as the “lead prosecutor” during the course of his odd, meandering arguments; and van der Veen’s threat to depose Vice President Kamala Harris in person, which resulted in the real Senate very literally laughing at him.

“That’s the way it works, folks … I don’t know why you’re laughing … there’s nothing laughable here” — the Senate chamber breaks out in laughter after van der Veen threatens to depose Nancy Pelosi and Kamala Harris not by Zoom, but in his office in Philadelphia pic.twitter.com/T0xiozHckE

“If they insist on witnesses,” Davidson declares, “I’m going to call some of my own. Like Vice President Kahlua Harris, Anya Pressley, and Ilhan Omaha. Now, did I mispronounce the names of all these women of color on purpose, or out of ignorance? You’ll never know.”

Davidson also presents a supercut of people saying “fight” to the jury that’s mercifully shorter than the real-world version (which clocked in at more than 11 minutes and almost 240 uses of the word “fight”).

…And the word “fight” played 238 times in that montage, per @OwenDCHayes https://t.co/nKUGwKQ9m0

The SNL version of the clip included not just Democratic politicians, but also Lady Gaga, Brad Pitt’s character from the movie Fight Club, and ends with Star Wars’s Jar-Jar Binks.

The final segment of the cold open lampooned Senate Minority Leader Mitch McConnell — who Moffat still refers to as “Majority Leader” — and his flimsy justification for voting to acquit Trump.

“Everyone knows you cannot impeach a former president,” Beck Bennett, who played McConnell, says. “That’s why we should have impeached him before, back when I said we couldn’t.”

Bennett also tears into Trump in a reasonable approximation of the real-world McConnell’s floor speech after Trump’s Saturday acquittal.

“I think he’s guilty as hell and the worst person I ever met and I hope every city, county, and state locks his ass up,” Bennett says before Moffat steers the segment into an “ad break.”

“We will be back right after this ad for senior emergency buttons,” he says, “But first: Live. from New York, it’s Saturday night!”

Playgrounds, babysitters, grandparents: What’s safe for kids in the age of coronavirus?
The Trump administration just imposed another roadblock on low-income immigrants
How Netflix’s Unbelievable turns a true story about rape into a must-watch TV
The 11 best movies that are newly available to watch at home
The Mueller report, explained
Mr. Robot’s final season is a brilliant argument for the show’s ongoing relevance