A grocery worker on coronavirus shopping 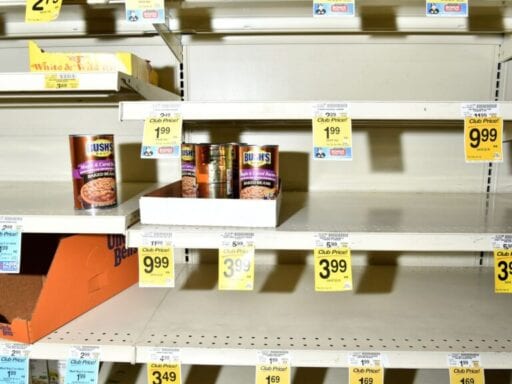 For Chris, dwindling supplies and hostile customers are just the beginning of Covid-19 fears.

We’ve all seen the scenes of anxious customers tearing through grocery aisles, loading toilet paper, hand sanitizer, and canned goods into piled-high shopping carts. The mania comes after thousands of work-from-home orders, vast state-wide lockdowns, a declared National Emergency, and an unnerving sense of ambiguity about how much the coronavirus will alter American life. The survivalist instinct is to stockpile goods and hope that a decade-worth of toilet paper might spare you from what’s to come. Unfortunately, people like Chris, a 67-year-old woman who works at a grocery store in Seattle, is caught in the crossfire of the panic.

Chris is employed by QFC, a Pacific Northwest supermarket chain that she describes as having three floors and a dense supply of goods. Despite that, she tells me that the store can barely keep up with demand. Bottles of hand sanitizer last 20 minutes, the chicken gets cleared out immediately, dry goods disappear within hours. All of this has left Chris feeling vulnerable. Seattle is one of the epicenters of the domestic Covid-19 outbreak. She understands that at her age, she falls into the bracket of people most vulnerable to a serious illness if she contracts the virus. States like New York and Ohio have closed down museums, movie theaters, bars, and restaurants in the wake of the pandemic, but core community infrastructure like grocery stores and pharmacies remain open. Chris’s work schedule isn’t going anywhere. She’s expected to be on the linoleum floor, surrounded by a swarm of nervy patrons, each of whom could potentially pass her the disease.

Right now, Chris is self-isolating at home. She informed her employer last Wednesday that she will be taking a temporary leave of absence after deciding that the chances of contracting coronavirus at her job were too great to risk it. Right now, there is no social safety net for people like Chris. She is no longer generating an income, and rent is bearing down in two weeks (though a moratorium on evictions in Washington state has been signed). The Trump administration fast-tracked a sick-leave bill to keep infectious workers at home, but thus far, the same guarantee does not exist for elderly or immunocompromised people who are staffing the few private institutions that will, in all likelihood, remain open for the remainder of the pandemic. Chris says she feels caught between two bad options: She needs to make money in order to live, but her current means of employment might kill her. We spoke about that, as well as about how the panic buying has affected her grocery store’s bottom line, and the shreds of optimism she finds in the attitude of the Seattle community.

So when did the panic buying start to pick up at your store?

“Ever since that Saturday they have been there every single day, buying everything”

It was when Governor Inslee declared a state of emergency [on Feb. 29]. We were just swamped. They were all over the place. They cleared the shelves. And this isn’t a small store. We’ve got three levels, and it’s practically a full city block. They cleared out the non-perishables, toilet paper was gone, anything that had to do with antiseptic sprays or wipes was gone. They went to the Clorox, never mind the hand sanitizer. We hadn’t ordered in anticipation of this, so we ran out. Ever since that Saturday they have been there every single day, buying everything. We put hand sanitizer on the shelf and it’s gone in 20 minutes.

Has this been high stress for you?

Back in September I fell and broke my elbow, and my main job is to go up to people who look confused and find out if they’re looking for something and to help them find that. Basically, I was thrown right into the middle of all these people. I’ve seen what’s been going on. I’ve seen all the rice and beans disappear, be it dry goods or canned. They cleared out the chicken. We can’t keep chicken in. At this point we’re over-ordering, and the staff of the store is working really hard. It’s been something else. They keep buying water. Why do you need water?

So a number of states have moved to shut down everything except for grocery stores and pharmacies. What does it feel like knowing that for as long as we’re under quarantine, you’ll still be going to work and be out and about when everyone else is shut in?

Here’s the thing. I’ve been taking this in stride. But last Sunday, when I saw that the crowds were not going down, and while I was keeping up on all the medical news and what’s going on, it hit me that, you know, I’m not in a good situation here. On Wednesday I called in and said I needed to take a leave of absence to the end of the month. So right now I’m negotiating to find a way to have an income while preemptively quarantining. Because I’m in that vulnerable group.

I have a realistic outlook. I do not expect to get through this horrible pandemic without getting sick at some point. I absolutely expect for that to happen. But I don’t want to get sick before we’re past the peak of infections. If I do get it and I get it seriously, I don’t want to be stuck out in the streets because there’s no room in the hospital. I’m reading Twitter reports from doctors in Italy about how they have to make this gut-wrenching decision about who they treat. They’re having to let people die. I don’t want to be stuck in that, and I don’t want to contribute to that.

The problem is I also need to have an income and health insurance, and I don’t know how to do that while self-quarantining. It’s an awful decision: Go to work and put your life at risk, or lose your job, lose your income, and lose your insurance. I haven’t committed either way at this point. I’m trying to find a way to stay home.

Trump came out a week ago and announced a national sick-leave plan. Are you holding out hope for some sort of legislation that will allow people like you, in that vulnerable group, to stay home while keeping an income?

It seems to me like it’s an oversight that they didn’t specify that — some way for the elderly or compromised to stay home. I applaud Inslee for taking the initiative and being the first state to call an emergency and open up all sorts of federal help. He has been able to get some leniency in unemployment. But right now, the requirement is that you have to be sick in order to be able to get that. It’s an oversight that they didn’t take that further, to offer that to vulnerable people before they get sick. I’ve got my fingers crossed. I’ve been making as much noise as I can about this. I hope that at some point it will occur to the people in power that they need to open this up more.

When you’re at the store, surrounded by all these people, do you feel vulnerable?

Absolutely. I’m pretty much concentrated on giving the best service I can to people. If they are looking for a product we don’t have, I’ll pull out my phone and find where they can get it. I give them new information. I really do try to do my best. But when I’m in the break room or before I go into work or after I get off, I have concerns. And that’s what’s made me stay home with no income coming in, looking at the bills coming at the end of the month. I don’t have savings, at this point all my credit is approaching max, and I’ve got rent coming up in a week or two. I don’t know what I’m going to do. Do I worry about that, or do I just go ahead and go to work? At this point I don’t think it’s safe. The virus has spread too much in Seattle. I think what finally started to get to me was two days before I made this decision, Amazon cleared up all their offices after an employee got sick. That building was right near my dentist’s office where I was getting dental care. It’s too close. A reasonable person would worry.

I don’t want to be glib about a serious situation, but I am curious: Do you have an idea how profitable all this panic buying has been for the store’s bottom line?

I know that it’s doing good business. Ordinarily, we do in the mid-single-digit thousands, and last week we did, I think, $200,000. It’s been really good for them financially, but on the other hand, people are being worked to death. You have all these people coming in, and a lot of them are pissed off that they can’t find what they need to get, they’re pissed off that they have to wait in line for so long, but no matter what store you go to you run into those issues. We’re ordering huge amounts of stuff to try to keep up with the demand.

Are customers still polite despite all of that?

On any given day, over the last four years, you have a few assholes. They feel privileged and entitled, and no matter what you do they take it as an opportunity to mistreat you in some way. But I’m finding that because of the panic, everyone’s a little bit in shock. So they’re very tolerant. There’s a hashtag called #WeGotThisSeattle. If you look on there, it’s a very reassuring bunch of tweets. There’s a fine dining restaurant that’s changing from being a sit-down restaurant to a takeout burger place. You’ve got people offering to do grocery runs for each other. Since nobody is coming to concerts, the symphony is doing these live streams on the internet, so you can sit back and watch that. It’s amazing to see how people are stepping up. By and large, everybody is trying to help everybody else out, because we’re all in this together.