A high school put books about police violence on a summer reading list. A police union wants them gone. 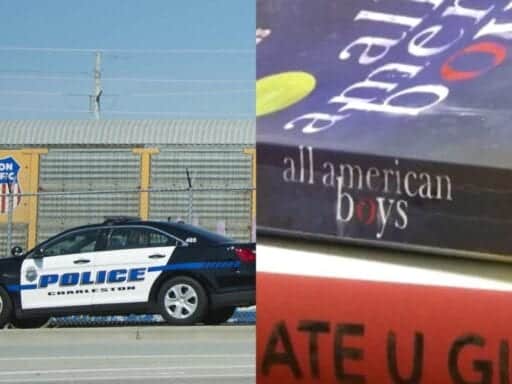 A South Carolina police union president said suggesting students read The Hate U Give and All American Boys is “almost an indoctrination.”

A high school reading list has become the source of controversy after a police union in South Carolina called for two books to be removed, arguing that the books would foster an anti-police sentiment among students.

The Fraternal Order of Police Tri-County Lodge #3 is objecting to two books on Wando High School’s freshman reading list: One, The Hate U Give, by Angie Thomas, follows a black teenager as she turns to activism after witnessing her close friend die in a police shooting. The second book, All American Boys by Brendan Kiely and Jason Reynolds, is about two teens — a black boy brutally beaten by a police officer and a white bystander — grappling with the aftermath of police violence. The titles are on a list of eight books from which students could choose.

The police advocacy group argued that the books paint police in a negative light. “It’s almost an indoctrination of distrust of police, and we’ve got to put a stop to that,” John Blackmon, a retired police officer and president of the group, told local reporters in June. He added that his group “received an influx of tremendous outrage at the selections by this reading list,” with police and community members asking why the school would “focus half of their effort on negativity towards the police.”

Blackmon’s critics have noted that Thomas’s book includes a sympathetic police officer figure, suggesting that the complaints are in part a result of not having read the material.

In response, the school’s principal, Dr. Sherry Eppelsheimer said that the school would look into the issue, and expanded the list of reading options from four to eight, according to Charleston’s Post and Courier. A committee will also review the books and listen to arguments from the teacher who created the reading list and the complainant before sending a recommendation to Charleston County’s school superintendent. The superintendent will then make a decision.

Criticisms of the books, The Hate U Give in particular, isn’t exactly new. The American Library Association notes that the book was on its list of “Top Ten Most Challenged Books” in 2017, although the group notes that most of those complaints were over language and depictions of drug use rather than its examination of police violence. And critiques are likely to mount as the book gains more attention, with a movie adaptation slated for October.

The backlash to the books, which are part of a larger increase in young adult novels examining race and police violence, mirrors ongoing scrutiny of police violence and racial disparities in police use of force. And the discussion echoes recent controversies around books highlighting racial injustice being banned in prison systems, suggesting that at a time of increased attention to matters of racial justice, some groups don’t want others to talk about it.

Challenging controversial books in schools isn’t exactly new. In Charleston, though, the argument against the books don’t rely on concerns about language or sex, but focuses instead on portrayals of police violence and its aftermath.

Blackmon argues that high school freshmen, at 14 or 15 years old, are too young and impressionable for the material. “They’re at the age where their interactions with law enforcement have been very minimal,” he said. “They’re not driving yet, they haven’t been stopped for speeding, they don’t have these type of interactions.”

This argument doesn’t entirely hold up. Police violence has struck victims younger than that, like 12-year-old Tamir Rice, who was shot and killed by a police officer while holding a toy gun. And students of color are disproportionately exposed to “the school-to-prison-pipeline,” which sees nonwhite students punished more often and more harshly than their white peers, at times being violently confronted by school resource officers.

Statistically, though, the students Blackmon is concerned about are less likely to face police violence. According to the latest numbers from US News and World Report, Wando High School is predominantly white, and draws from some of the wealthiest parts of the county.

Even so, police violence isn’t new to the area. In 2015, Walter Scott was filmed being shot by police in North Charleston as he ran away from an officer. After that shooting, Blackmon issued a statement lashing out at those critical of police use of force, saying that the community should “not allow the professional race agitators to seize this moment to advance their often self-serving opinions of what is wrong in South Carolina.” His argument has been frequently deployed since the rise of Black Lives Matter, with critics arguing that any attention to police violence is equal to being anti-police.

On a broader level, it’s part of a larger discussion about the narrative around policing and who gets to frame it — critics point out the ways state violence and the justice system affect people of color while supporters seek to tamp down critiques of these institutions.

Book bans are a part of this. Earlier this year for example, prison systems in Florida, New Jersey, and North Carolina made headlines when a combination of news reports and pressure from various ACLU chapters revealed that they had long banned Michelle Alexander’s The New Jim Crow, which examines how mass incarceration and the war on drugs have carried forward the legacy of Jim Crow by disproportionately targeting black men. Some prison systems noted that they had banned the book due to its “racial content,” which drew criticism from advocates at groups like the ACLU.

“Some prison officials are determined to keep the people they lock in cages as ignorant as possible about the racial, social and political forces that have made the United States the most punitive nation on earth,” Alexander told the New York Times earlier this year. “Perhaps they worry the truth might actually set the captives free.”

That ban was later ended in New Jersey and North Carolina.

Trump called for unity against political violence. He didn’t mention what he said last week.
Some autistic people find comfort in specific objects. What happens when they’re not available anymo...
Why coronavirus conspiracy theories have spread so quickly
The 9 best movies you can now watch at home, from Trolls World Tour to Parasite
3 charts showing the alarming decline of Arctic sea ice this year
President Trump tests positive for the coronavirus