A historic impeachment day, in 15 photos 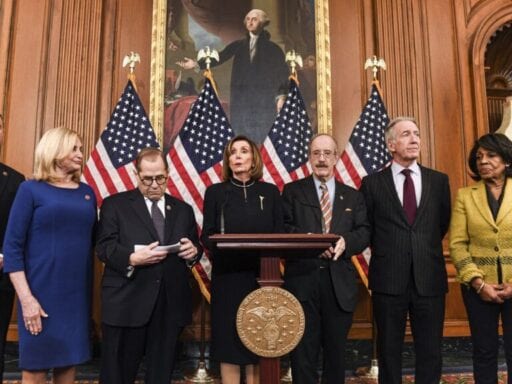 For the third time in US history, the House has impeached a sitting president.

As somber as Democrats have been about the impeachment process, the atmosphere of Wednesday’s historic vote wound up being anything but.

Following a heated floor debate over the two articles brought against the president (see: impassioned remarks on everything from constitutional responsibility to Trump’s biblical parallels), the evening votes on the subject were just as raucous.

Amid GOP chants of “four more years,” and scattered Democratic applause, members of both parties rushed the dais to individually submit their votes on two articles of impeachment, the culmination of a months-long inquiry into President Donald Trump’s dealings with Ukraine.

With several members clad in black, including House Speaker Nancy Pelosi herself, the House ultimately voted — for the third time in US history — to impeach a sitting president. It’s a decision that will long be remembered as a massive rebuke of Trump’s presidency even if the Senate votes to acquit.

Pelosi first announced an impeachment inquiry of Trump this September. On Wednesday, lawmakers officially voted on two articles of impeachment: abuse of power and obstruction of Congress.

Pelosi has long said this is a “solemn” exercise, and she called on her caucus to treat it as one on Wednesday.

Despite the political fallout they could face, nearly all moderate Democrats — including Elissa Slotkin, of Michigan, voted in favor of articles of impeachment.

Rep. Jeff Van Drew of New Jersey was one of a handful of Democrats who defected. His handling of the decision was so polarizing he’s since decided to switch parties and become a Republican.

Outside the Capitol, protesters gathered to express their support for impeaching the president, joining thousands of activists around the country who’ve been doing the same this week.

Some activists came out in favor of Trump, too.

Meanwhile inside the Capitol, Senate Republicans like Trump ally Lindsey Graham offered a preview of what the impeachment trial — which ultimately decides whether Trump is removed from office or not — would look like.

Trump, himself, attended a rally in Michigan as the House votes were underway.

Both parties were relatively united across votes on the two articles of impeachment. Reps. Van Drew, Collin Peterson, and Jared Golden were the only Democrats to defect. (Hawaii Democrat Tulsi Gabbard voted present).

Pelosi oversaw the tallies of the votes, and quieted her caucus at times, in an effort to emphasize the seriousness of the endeavor.

The homemade masks of coronavirus
Why Iran won’t talk to Trump, explained in one paragraph
What Mike Bloomberg actually did in New York City
Trump says he likes the immigration issue in this election
The Nobel in Medicine went to 3 scientists who co-discovered hepatitis C
Sen. Maggie Hassan suspends intern for yelling vulgarity at President Trump