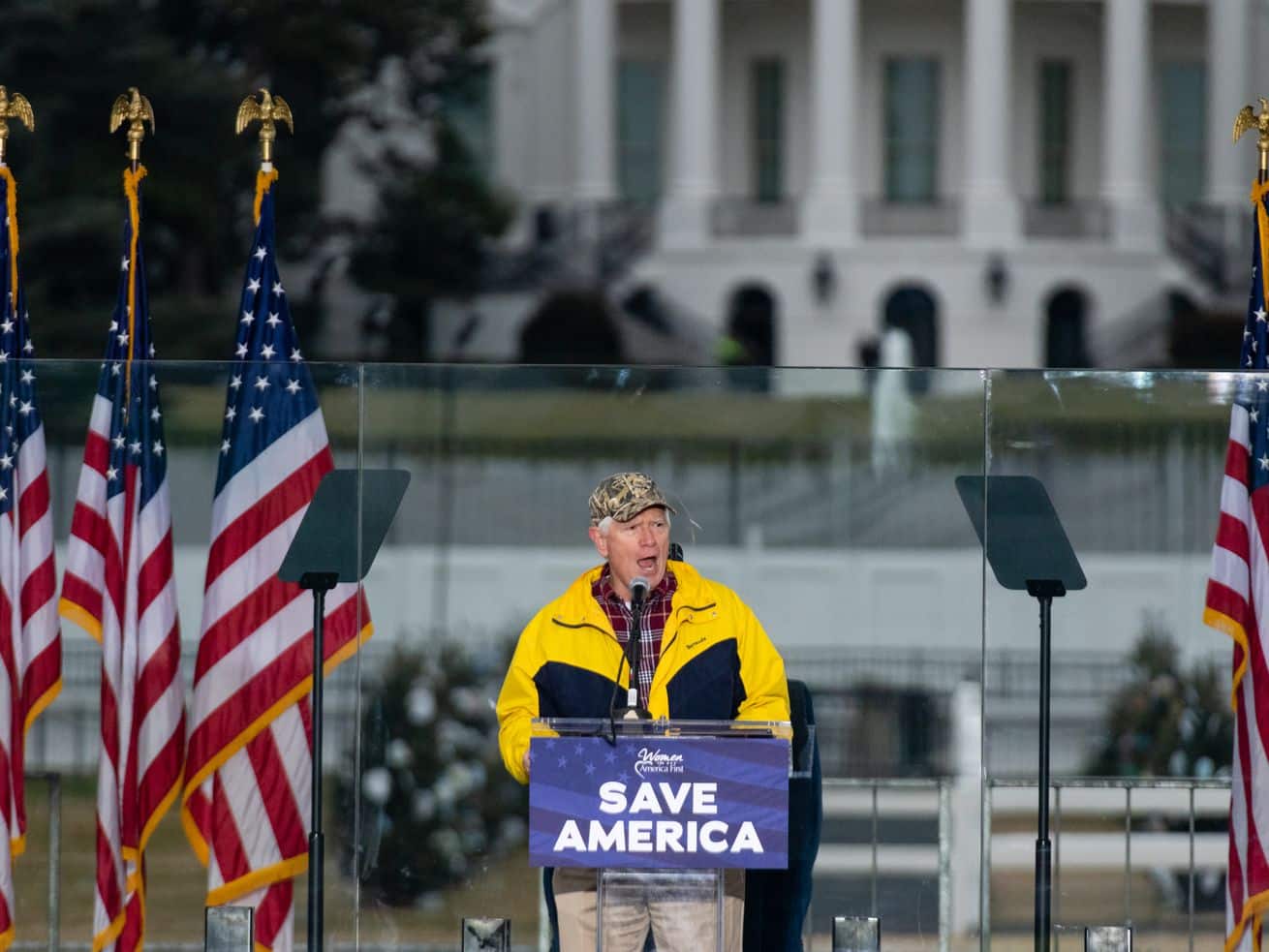 Rep. Mo Brooks (R-AL) responded to getting served with a lawsuit over his role in the January 6 insurrection with a tweet that went viral for regrettable reasons.

On Sunday, Brooks posted a tweet accusing the process server who served him with a lawsuit on behalf of Rep. Eric Swalwell (D-CA) with trespassing. The tweet included a photo of a computer screen displaying Alabama’s criminal trespassing statute — the implication being that the process server somehow violated the law when they served the lawsuit to Brooks’s wife at their Alabama home.

While that’s a rather explosive allegation, that tweet will be best remembered because the photo it included also showed a strip of paper that appeared to have Brooks’s Gmail password on it.

Brooks, who in an ironic twist serves on the Armed Forces Committee’s Subcommittee on Cyber, Innovative Technologies, and Information Systems, later deleted and reposted the tweet without his password showing.

On Monday, Brooks tweeted video that he claims shows the process server “chasing my wife into my home.” But in reality, it’s unclear what exactly the footage shows. The New York Post describes it as showing the server “follow the wife of [Brooks] into their garage.”

If so, why do I have this video showing the man chasing my wife into my home? pic.twitter.com/JdlgAdia1a

Swalwell resorted to hiring a private investigator to track down Brooks, citing difficulty in serving his fellow representative the suit; Brooks demanded to be served, but according to Swalwell, he refused to make himself available to receive the papers. (Swalwell and his office did not immediately respond to messages seeking comment.)

Brooks has presented no evidence that the process server actually did anything wrong, and a lawyer representing Swalwell told CNN that the trespassing allegation is untrue. Considering that Brooks has been one of the foremost Republican promoters of former President Donald Trump’s lies about the outcome of the 2020 election, it’s hard to take him at his word about the situation.

But the silliness surrounding Brooks’s tweet shouldn’t obscure the fact that Swalwell’s lawsuit represents a serious effort to hold accountable the Republicans who encouraged the January 6 insurrection during speeches that took place just before it at that morning’s “Stop the Steal” rally.

Brooks began that January 6 rally with a speech in which he angrily told Trump supporters, “Today is the day American patriots start taking down names and kicking ass!”

Rep. Mo Brooks was the first speaker at the Trump rally on Wednesday just before the mob attack on the Capitol. He urged Trump supporters to start “kicking ass.” pic.twitter.com/hduaCMYcRd

Donald Trump Jr. followed Brooks with a speech in which he warned Republicans in Congress that if they didn’t “fight” for his father later that day, “I’m gonna be in your backyard in a couple of months.”

Likewise, Rudy Giuliani said “let’s have trial by combat,” and then-President Trump capped off the rally with a speech in which he used the words “fight” or “fighting” at least 20 times.

A mob subsequently converged on the Capitol, breaching the building and forcing lawmakers to suspend the work of certifying Joe Biden’s victory over Trump. The riot resulted in injuries to 140 officers, five deaths, and more than 450 arrests and counting.

While some of the people who breached the Capitol have been held accountable for their actions, those who helped incite them have not. Trump was impeached by the House but not convicted by the Senate, and none of the “Stop the Steal” speakers have faced charges.

Swalwell’s lawsuit is an attempt to provide that accountability. In his personal capacity, Swalwell, who served as an impeachment manager during Trump’s most recent impeachment trial, filed suit against Trump, Trump Jr., Giuliani, and Brooks in March, alleging that “as a direct and foreseeable consequence of the Defendants’ false and incendiary allegations of fraud and theft, and in direct response to the Defendants’ express calls for violence at the rally, a violent mob attacked the U.S. Capitol.”

The lawsuit is a civil one, meaning that even if those named are found guilty of inciting the insurrection, they won’t face any prison time. Instead, the Washington Post reported that Swalwell’s lawsuit “seeks compensatory and punitive damages, attorney’s fees, a declaration that defendants violated the law and a requirement that they provide seven-days written notice before any future rally or public event in Washington on a day with any significant election or election certification event.”

But a guilty verdict would nevertheless be a striking, and public, rebuke — a statement despite their claims otherwise (and despite the Senate’s acquittal of Trump) that Trump, Trump Jr., Giuliani, and Brooks did spur the insurrectionists, and that they damaged the democratic process in doing so.

Brooks is still all-in on Trump and his big lie

Brooks’s response to the lawsuit has been defiant. In addition to launching a barrage of ad hominem attacks against Swalwell, he’s tweeted that he’ll “make no apologies whatsoever for fighting for accurate & honest elections.”

In motions they’ve already filed to dismiss the Swalwell lawsuit, the other defendants have argued that their “Stop the Steal” remarks were protected speech. Whether this argument is accepted remains to be seen, particularly as the Supreme Court ruled more than 50 years ago that speech “directed to inciting imminent lawless action and is likely to produce such action” is not protected.

During a CNN appearance on Monday morning, Phil Andonian, an attorney representing Swalwell, said “we look forward to holding [Brooks] accountable for his role in this deadly insurrection. Brooks, however, doesn’t seem overly worried about it.

Not only has Brooks been unapologetic about his January 6 speech, but on his website he’s actually using it to fundraise for his campaign to fill the US Senate seat being vacated by retiring Sen. Richard Shelby (R-AL). His willingness to repeat lies about the legitimacy of the election has paid other dividends as well: The display name for his personal Twitter account is “Mo Brooks – Endorsed By President Trump.”