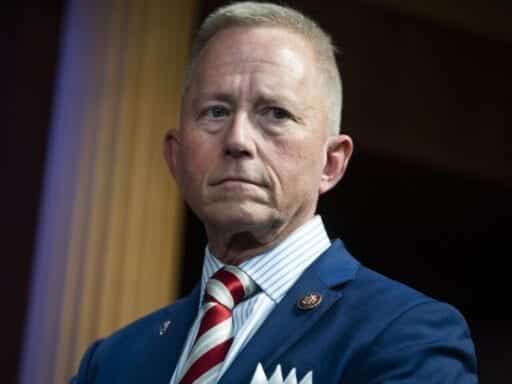 Van Drew’s announcement is poised to take place as the House votes on whether to impeach the president. It’s a development that’s seen as providing an opportune distraction for Trump, which Republicans also view as underscoring the partisan nature of impeachment. Van Drew’s decision comes as he stares down a potentially competitive Democratic primary in 2020 — and a similarly tight general election in a district that Trump won in 2016.

As the logic goes, if he switches parties, Van Drew could secure Trump’s endorsement and perform well in the Republican primary and subsequent general election. (There’s no guarantee, of course, that this plan would work.)

Van Drew currently represents New Jersey’s second congressional district, a southern swath of the state that includes Atlantic City. He first won his seat in the House in 2018, becoming one of 31 Democrats to capture a district that Trump took in 2016.

Van Drew has long been a more conservative member of his caucus and his House seat has been held by Republicans for some time. However, Van Drew’s efforts to switch party affiliation have only emerged as he has begun to attract national attention for his decision to buck House Democrats’ impeachment inquiry.

Van Drew and Rep. Collin Peterson (D-MN) were the only two Democratic lawmakers to vote against a House resolution laying out the procedures of the impeachment inquiry earlier this year. And he’s since said he plans to vote against the articles of impeachment next week as well.

“I think this splits the country apart further, it is only about 13 months until an election,” Van Drew previously told reporters.

Despite this declaration, there were signs the lawmaker was facing growing pressure from both his own party and Republicans.

As the Times reports, Van Drew encountered backlash from other New Jersey Democrats given his opposition to impeachment, and was potentially set to confront a liberal primary challenger next year. And the New Jersey Globe’s David Wildstein reported that when Van Drew asked state party leaders for a letter of support recently, they told him no.

“Some of us have had enough of Jefferson Van Drew,” one Democratic official told Wildstein. “He’s on his own now.”

Without his party’s help, Van Drew faced a tough election in a district that went for Trump by five points in 2016. And even if he made it past the Democratic primary, his victory in the general election was far from certain.

Van Drew’s plan to switch parties appears to be the solution he’s found for this dilemma: By making his announcement next week, Van Drew helps Trump score a small win as the House impeaches him. In return, Trump could endorse Van Drew for re-election, a move that will likely help him in a Republican primary and the general election.

Even so, Van Drew’s efforts don’t mean that he’s set for re-election. The Cook Political Report has the district rated as a toss-up — and it’s possible Van Drew’s abrupt switch could ultimately help energize the very Democrats who elected him in 2018.

As Bloomberg’s Sahil Kapur noted on Twitter, lawmakers who have switched parties in the past — including Rep. Parker Griffith and Sen. Arlen Specter — haven’t always walked away victorious.

Most recent party-switchers in the US Congress, and what happened

US-Russia summit: Donald Trump and Vladimir Putin meet in Helsinki
Trump wants Congress to give him more power to impose tariffs
20 years after Columbine, the guns are still the problem
Kirsten Gillibrand gave her opponents a history lesson on abortion politics at the debate
People who travel for a living are struggling to find work
Trump is taking money from Puerto Rico’s recovery and European security to fund his wall