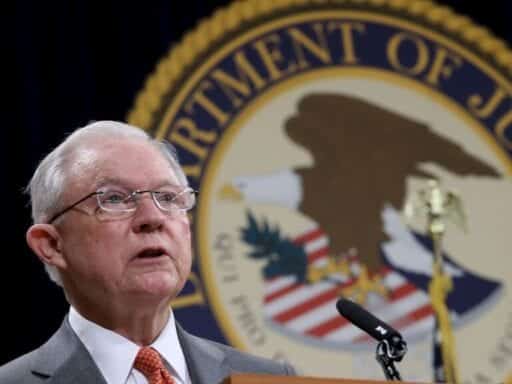 The government reportedly tried to deport a woman and her daughter while their case was still being heard in court.

A federal judge in Washington, DC, threatened to hold Attorney General Jeff Sessions in contempt of court after learning that the Trump administration was in the process of deporting a woman and her daughter in the midst of their asylum case being heard in court, the Washington Post reported.

US District Court Judge Emmet G. Sullivan halted the deportation Thursday, calling it “outrageous” that “someone seeking justice in U.S. court is spirited away while her attorneys are arguing for justice for her.”

The judge was reportedly furious when American Civil Liberties Union lawyers were informed that their plaintiff — a woman identified in court papers as Carmen — and her daughters had been taken out of family detention in Texas and were possibly being taken to the airport to be flown out of the country. The Department of Justice had agreed to delay deportation hearings for Carmen until midnight on Thursday so her lawyers could appeal her removal orders in court.

Carmen is a plaintiff in an ACLU lawsuit filed earlier this week challenging the Trump administration’s new rules around asylum seekers; the rules, announced in June, disqualify victims of gang violence and domestic abuse from seeking asylum on those grounds alone. The ACLU lawsuit claims their “plaintiffs and thousands of other immigrants like them desperately seeking safety will be unlawfully deported to places where they fear they will be raped, kidnapped, beaten, and killed.” The lawsuit is on behalf of 12 migrants from Central America.

The Trump administration has repeatedly shown it’s willing to go to great lengths to implement a harsh immigration agenda that clamps down on asylum seekers coming to the United States. President Donald Trump has even suggested throwing out due process for immigrants who cross the border illegally. This appears to be yet another case of the administration disregarding the judicial process.

As Vox’s Dara Lind explained, Sessions’s rules about domestic and gang violence claims didn’t just raise the standard for who can be granted asylum but also made it harder for immigrants to pass the initial screening at the border to apply for asylum, testing whether they have “credible fear” of returning home. Lind writes:

In other words, any Central American migrants who are currently en route to the US are going to be met with a higher bar to entry than the one they thought was in place when they left. Thousands of people who already arrived in the US but have been sent to criminal court to be convicted of illegal entry before they can make an asylum claim may now find themselves unable to pass a screening they would have passed when they arrived. That includes hundreds if not thousands of parents whose children have been separated from them.

Making it harder for immigrants to seek asylum has been one of the core tenets of the Trump administration’s immigration agenda. The administration has baselessly claimed that the asylum process is overrun with criminals and frauds and touted aggressive deportation goals.

But these policies have repeatedly overstepped American bounds, most recently with an administration policy that separated more than 2,000 migrant children from their families at the border.

Now, in reportedly trying to deport a woman while her lawyers appealed her immigration case in court, a federal judge made clear that Sessions had overstepped again.

“I’m not happy about this at all,” Judge Sullivan said. “This is not acceptable.”