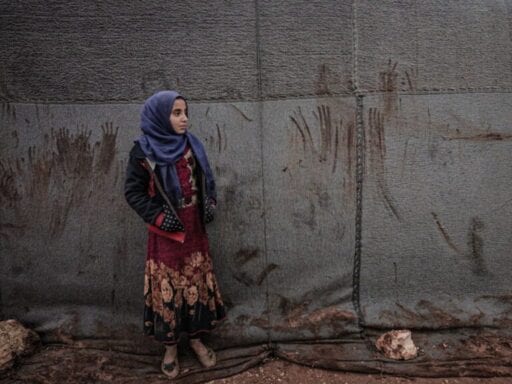 Share
Loading...
Syrians are seen on the mud covered road between tents at a refugee camp, where Syrian refugees live, after heavy rain at winter season in northeastern Idlib, Syria, on December 13, 2019. | Muhammed Said/Anadolu Agency via Getty Images

It’s one of many ways the Trump administration has tried to scale back the US refugee program.

The Trump administration opposed a bill that would allow Kurds and other Syrian refugees to immigrate to the US more easily as Turkey’s recent offensive in the war-torn country has left tens of thousands of civilians displaced, according to a leaked State Department memo first reported by the Daily Beast’s Betsy Swan.

The bill, co-sponsored by Sens. Jim Risch of Idaho and Bob Menendez of New Jersey, would allow certain Syrians to obtain US visas in return for aiding US military efforts in the ongoing Syrian civil war, and to come to the US as refugees more quickly. It would also impose sanctions on Turkey for buying Russian missiles in defiance of the US and NATO allies.

The unsigned State Department memo asserts that the bill would infringe upon President Donald Trump’s authority to determine which refugees can be admitted to the US and would not give the administration sufficient time to effectively screen Syrians for security threats. It’s yet another signal that Trump is unwilling to open the US’s doors to even the most vulnerable immigrants.

Turkey invaded northeastern Syria in October after the US withdrew its forces from the region, but negotiated a ceasefire with Russia, which has backed the Syrian government, later that month. Still, Turkish proxy fighters have continued to terrorize civilians in the area, forcing them to flee.

As of November, the UN Office for the Coordination of Humanitarian Affairs has identified more than 190,000 Syrian Kurdish civilians who were internally displaced, and more than 400,000 civilians remaining in the conflict zone who will have “significant humanitarian needs” going forward.

The bill would fast track certain Syrians and their families for refugee resettlement in the US, including Syrian Kurds, others who supported the US military or humanitarian mission in Syria after 2014, employees of American NGOs, those with close families members in the US, and members of persecuted groups in Syria.

The State Department memo says, however, that the bill “undermines and constrains” Trump’s power to determine refugee admissions and that he has already “been clear on this administration’s approach to refugees,” setting the annual cap on admissions at 18,000 this year — an all-time low.

The bill would also allow Syrians who were employed by US forces and are under immediate threat to come to the US under Special Immigrant Visas, which have been reserved primarily for Iraqis and Afghans so far. But the State Department took issue with the proposed 9-month timeline for processing those visas, claiming that it “fails to accommodate vital national security screening.”

Keeping out Syrian refugees was one of Trump’s campaign promises

The US started welcoming Syrian refugees at high rates in 2015. But the public opinion started to turn after the Paris terror attacks later that year, in which 130 civilians perished in explosions and mass shootings throughout the city, attacks reportedly sanctioned by ISIS.

There was speculation that one of the attackers was a Syrian refugee. It was later confirmed that all of the perpetrators were citizens of the European Union. But the rumors were enough to spark a panic about Syrian refugees and start a movement among governors, mostly Republicans, to cut back US admissions of Syrian refugees and resettlement efforts more broadly.

In September, Trump announced the US would only accept 18,000 refugees total this fiscal year. Only a fraction of them, however, could be from Syria.

The US has reserved space for refugees fleeing religious persecution; Iraqis who assisted the US government or who have other American connections; and those from Guatemala, El Salvador, and Honduras. That leaves space for 7,500 other refugees, potentially from Syria.

A recent executive order from Trump will allow state and local authorities to block refugees from settling in their areas. States won’t just be able to refuse refugees from certain nations, such as Syria, but they will be able to turn away all refugees if they do not have the resources to become “self-sufficient and free from long-term dependence on public assistance.”

Florence County, South Carolina, shooting of police officers: what we know
The reason carry-on luggage became such a hassle
Study suggests Democrats should be running more ads about Biden, fewer about Trump
Last weekend’s North Korea news is an unpleasant surprise for Donald Trump
Democrats want to turn Texas blue. It starts with the state House in 2020.
Biden will reverse Trump’s decision to label Yemen’s Houthis as terrorists