A man takes over a feminist fashion brand. What happens next? 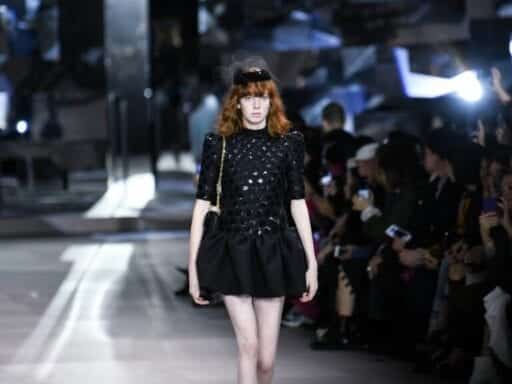 A tear has appeared in the fabric of the fashion world, and it’s unlikely to be mended any time soon. Last Friday, during Paris Fashion Week, designer Hedi Slimane presented his debut collection for the revered French brand Celine. The clothes themselves weren’t particularly shocking — they embodied the same rock ‘n’ roll aesthetic Slimane promoted during his last job as creative director of Saint Laurent. What incensed Celine fans was the ruthlessness with which he disposed of the Celine that came before.

To understand why Slimane’s designs caused such furor, you have to understand his predecessor, Phoebe Philo. During her decade at Celine, she created clothing that was wearable and sophisticated but never boring, a uniform for a certain kind of worldly woman. (In the ultimate branding coup, Philo got Joan Didion, at age 80, to pose for a Celine ad in a black knit shirt and sunglasses.) Fit for club kids, Slimane’s first collection didn’t sit well with many.

This is a significant moment in fashion, throwing a spotlight on the question of who is best equipped to design clothes for women, and what those clothes should look like. It also not only reflects the male-dominated nature of the fashion world, but comes at a time when women are mobilizing against the male-dominated nature of pretty much everything.

A “woman’s designer” in a heavily male business

Philo arrived at Celine — then known as Céline, before Slimane struck the accent — in 2008. After a widely-lauded stint as creative director of the French brand Chloé, she had taken a few years off to raise her children and recover from the exhaustion of commuting between Chloé HQ in Paris and her home in London. Her first collection at Celine was a critical winner, balancing tailored tuxedo jackets and overcoats with the loose elegance of a draped silk shirt.

“One look at the designer’s confident, spot-on debut collection for Céline and it’s clear how much we’ve missed her,” wrote Vogue fashion critic Nicole Phelps at the time.

Philo is known as a “woman’s designer.” Truly, it’s hard to find a profile or review of her work that doesn’t mention her knack for intuiting what adult women want to wear and giving them just that. What women wanted during Philo’s reign at Celine — at least what her devotees wanted — were quietly powerful clothes: baggy trousers, luxuriously thick sweaters, and streamlined skirts that kicked out just past the knee.

Like Jenna Lyons at J.Crew, Philo was her own best model. After fashion shows, she often took her bow wearing a simple sweater, loose pants, and sneakers (she basically put Adidas Stan Smiths back on the map). Women everywhere swooned and followed her lead.

“[Philo’s] specialness lies in synthesizing how women want to dress with how they actually live their lives,” wrote Whitney Vargas for T Magazine in 2014. “And how we want to see ourselves: sophisticated, knowledgeable, not victimized by fashion. Increasingly, comfort is the ultimate commodification of luxury.”

The filmmaker Sofia Coppola, interviewed by the New York Times, offered this assessment of Philo’s Celine: “It’s not based on some weird idea of what a woman should be.”

Philo gets called a “woman’s designer” in part because the powerhouses of women’s luxury fashion are mostly run by men. Chanel, Louis Vuitton, Balenciaga, Valentino, Saint Laurent, and Gucci all currently have male designers at the helm (many of whom, it should be noted, have legions of adoring female fans). There are certainly female creative directors in the mix — at Givenchy, Alexander McQueen, and Dior, as well as at numerous smaller brands — but it remains one of the truths of modern fashion that men, overwhelmingly, dictate what women wear.

Plenty of male designers could have carried on Philo’s work making subtle, elegant, sometimes weird clothing and accessories. Hedi Slimane is not that guy. His style is so radically different from Philo’s that for Celine fans, the handoff didn’t just mark the departure of a beloved designer; it represented a fundamental shift in the nature of the brand.

Slimane also did wonders for Saint Laurent’s bottom line. In four years, he “roughly tripled” the brand’s revenue, pushing its annual sales past the $1 billion mark. Celine’s parent company LVMH no doubt saw Slimane as a potential cash cow. When the conglomerate announced Slimane’s appointment in January 2018, it said that he would launch couture, fragrances, and menswear for Celine. Cha-ching.

Slimane’s debut at Celine confirmed what fashion fans already suspected: Phoebe Philo’s Celine was effectively dead. With its preponderance of leggy, glittery clothing, Slimane’s first Celine collection was a classic Slimane affair — so much so that the Instagram account Diet Prada, a widely-followed knockoff watchdog for the fashion community, posted a roundup of Celine looks that closely replicated Slimane’s work at Saint Laurent. (The men’s line also seems truly antithetical to Philo’s project.)

It’s wrong to say that Slimane doesn’t know what women want. His sales at Saint Laurent clearly disprove that. What’s happening at Celine is the replacement of one vision of womanhood — the comfortable, grown-up kind that often gets called “intellectual” — with one that prizes youth and unkempt cool. Slimane has a completely different interpretation of what women aspire to than Philo does; his Celine is typically provocative, a different kind of power dressing.

During Philo’s tenure, Celine was regarded as prime feminist fashion, a feeling that radiated from the fact that Philo designed from a place of kinship with her customers. There are, of course, many ways to be a feminist, and one can certainly be a feminist in Slimane’s designs. But to the women who followed and bought Philo’s work, Slimane’s Celine debut said, quite plainly: “This is not for you anymore.” There will be no more chin-high turtlenecks or furry shoes to cocoon oneself in, and gone too is the queen of the sisterhood of Celine.

And so, the rage set in.

My last note on Celine because I have more important things to dedicate my rage to – what a day to present such a tone-deaf, ignorant, belligerent, narcissistic show.

I really thought this week couldn’t get any worse news wise, and then I saw Hedi Slimane first collection for Céline and was filled with such an intense rage I crushed my soda can with one hand. pic.twitter.com/RXgdKUZRez

still mad about it, so disrespectful to celine’s history https://t.co/sycdtP2Jve

i wouldnt be mad except he did this to celine, which like….. he turned it from this sort of thoughtful exploration of womanhood into, that

For many Celine fans, Hedi Slimane’s erasure of Phoebe Philo’s work couldn’t have arrived at a worse moment. Coming up on the one-year anniversary of the Harvey Weinstein allegations that kicked the #MeToo movement into high gear — and the two-year anniversary of President Trump’s election — this is a time when women are fighting hard against the forces that would silence them by speaking out against sexual predators and running for office. Only a day before the Celine show, Christine Blasey Ford recounted her memories of an alleged high school sexual assault on national television; only four days later, Trump mocked her testimony at a rally.

Fashion often isn’t intended to be overtly political, but it’s impossible not to see what we wear through the lens of what’s happening around us. Clothes reflect the times. They’re how we armor ourselves to move through the world.

Slimane did what he does best, what he’s been doing for years. But the context has changed; he didn’t read the room.

Responding to criticism of his Celine collection, he argued that women should be able to wear miniskirts if they wish, telling a French television program, “The young women in my show are liberated and carefree.”

Slimane continued: “For some in America, I also have the poor taste of being a man who is succeeding a woman. You could read into that a subtext of latent homophobia that is quite surprising. Is a man drawing women’s collections an issue?”

A goodbye to Phoebe Philo — for now

Business of Fashion’s Lauren Sherman reported that on the day of Slimane’s Celine show, a group of women — high-profile fashion editors and department store buyers among them — gathered in Paris to celebrate Philo’s Celine.

“The dress code? ‘Strictly Céline, not Celine,’ read the invite, laid out in a typeface not unlike the one embossed on the label of the sage-green, broad-shouldered blazer stylists Yana McKillop and Natasha Goldenberg were both wearing,” writes Sherman.

And the mourners are shopping. In the five days following Slimane’s debut, Celine sales on the RealReal rose 51 percent (relative to revenue between September 1 and 27), according to a rep for the luxury resale site. Search traffic for Celine on the RealReal was up 36 percent. Clearly, people were after vintage (read: Philo’s) Celine.

On Wednesday night, I stopped by the Celine store in New York’s Soho neighborhood. The space was serene, all cool concrete, colorful marble, and tall potted plants. While pawing through a rack of dense, pillowy turtlenecks and nubby trousers, I overheard a woman on her cell phone say that she, too, had come to say goodbye.

That store is closing today. Tomorrow, Celine will reopen in a temporary space while the main location is refurbished according to Slimane’s specifications. By the time I made it out for a visit, Philo’s presence in the Celine store was already a ghostly one: Her last collection landed on shelves in June, and the fall 2018 collection, presented after her departure, was designed by her studio, not the woman herself.

Lest we forget, Philo left fashion for a spell after her run at Chloé, only to return in full force at Celine. Fans can only hope she’ll pull the same move twice.

Will the government shutdown affect tax refunds and returns? Maybe not.
How Spain’s coronavirus outbreak got so bad so fast — and how Spaniards are trying to cope
Steve Irwin said, “My mission ... is to save wildlife.” He did.
The world’s pollution will finally be tracked in real time. That’s huge.
Pennsylvania’s naked ballot problem, explained
America’s sex education system is broken. This chatbot wants to be the solution.