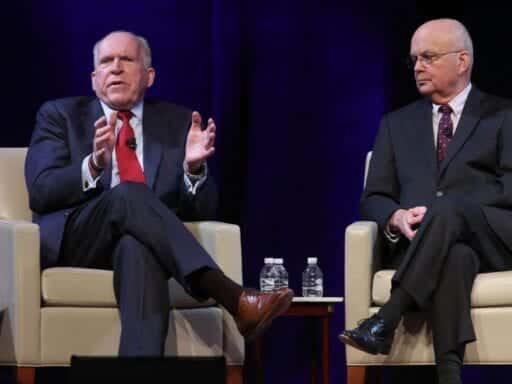 Trump wants to take away security clearances for ex-intel officials. It might set a dangerous precedent.

President Trump is considering revoking the security clearances of former top intelligence and law enforcement officials, all of whom just happen to be critics of the administration.

White House press secretary Sarah Sanders said Monday that the president was “exploring” such a move because the former officials “politicize and in some cases monetize their public service and security clearances.”

Trump’s security clearance hit list includes people he’s personally attacked; his Twitter feed offers all the evidence you need. Some of the officials on the list, such as McCabe, may have had their security clearance revoked justifiably. (Comey and McCabe both indicated they did not have security clearance; Hayden told Vox that it wouldn’t affect on what he says or writes.) But for others, Trump’s gambit reeks of political retaliation.

Vox spoke with Mark Zaid, a national security attorney, to get a sense of what Trump’s attempt to rescind security clearance means, practically and politically. Security clearances — how people can access them, and how they’re revoked — are governed by a 1995 executive order issued by President Bill Clinton. There are certain guidelines under which clearances can be revoked, and the executive order requires an explanation in those instances. Political opinions aren’t one of them.

These former intelligence officials will probably be just fine, whatever the administration does. They’ve got speaking gigs and book deals. The Trump administration likely isn’t calling up Brennan or Clapper for intelligence advice. The worry instead should be over another norm attacked, and the slippery slope that comes after.

“The reality is they probably could care less about their clearances,” Zaid said of the former officials. “It’s still the precedent that’s being set — to set back the entire security establishment that we’ve created over the last 75 years.”

Our conversation, edited and condensed, is below.

If someone departs the White House or the federal government, isn’t their security clearance just cut off once they leave service?

A ton of the 4 to 5 million people who have clearances are contractors. They don’t work for the US government; they work for Booz Allen Hamilton and Northrop Grumman and Lockheed Martin. But at the Cabinet level, it’s very common for former secretaries and CIA, NSA directors to maintain their clearances because they’re brought in as advisers, for use in their experience and knowledge.

They also have the ability, under the executive order, to go back through their papers if they want to, for historic purposes, when they do their memoirs. They get access. It’s common that the people who have been named — although I understand Comey doesn’t have access, McCabe definitely doesn’t have access, and Hayden says he doesn’t have any access right now. I don’t know about the others, but they probably still have — and here’s the difference — eligibility. Eligibility versus access, so different things. They may be eligible for classified access, but they might not have access.

So they’re eligible on a case-by-case basis? I’d like to write my memoir and look at X, Y, Z papers, and the CIA, or whatever agency, says, “Sure, you can access this because you’re eligible”?

Usually so. There’s a provision in the executive order that grants historic access in that context. But they’re often on advisory committees for their home agencies — former CIA directors, former secretaries of state. The current [administration], oftentimes — although this administration is very different — but in the past, for example, Condoleezza Rice would still talk to Madeleine Albright, or whoever. They would still talk to one another for a variety of things.

So does security clearance expire on its own?

But people are out of scope all the time, and still are. Sometimes even though there was a requirement within five years, it would be five to 10 years before an individual would have their poly[graph] or their new background investigation. And it’s routine; it’s very common at many of the agencies that that happens.

But so long as you’re continuing, you’re employed, you’re fine. But if you leave government service, it would be a problem; you’d have to reapply. You’d go to a contractor or whatever, they’d look you up in the system and they’d see that you need a new background investigation, and that’s always a factor in hiring because it’s going to take a while.

This revocation of security clearance seems like a politicization of the federal bureaucracy in a way that seems somewhat alarming. I don’t know what your thoughts are on that.

It is incredibly alarming. … As far as we know, it is unprecedented that a president of the United States would get involved with a security clearance determination. Any president is the final authority on access to classified information; they can decide whatever they want, that is for sure.

But if you think about it, on any given day, a large percentage of those 4 to 5 million who have a security clearance are likely members of the opposite political party from whoever is president. I’m not sure if there’s any way to figure it out, [but] I’m sure at most or at worst that the lowest is 35 or 40 percent of whoever has a clearance is going to be in the opposite party of the sitting president of the United States.

To think that a president would render a clearance decision based solely on an opposing political viewpoint is reminiscent of Stalinist Russia and Nazi Germany. I mean, that’s what happened back in those times.

There are potentially legitimate reasons to revoke the security clearances of some of these individuals who have been named. But that would be on objective, substantive grounds challenging their trustworthiness. Just because they’re politically opposed to the president does not impact their trustworthiness at all.

When it comes to revoking clearance, does a reason need to be given? Or is it at the discretion of whoever is making that decision?

So the executive order that governs security clearances, which President Clinton issued in 1995, requires that if a clearance is denied or revoked — deny, you don’t have one; revoked, you had one — it requires an explanation in writing, specifying why. There may be limitations based on national security, so the reasons are sometimes classified. There are incredibly rare exceptions — I think I’ve had the only one in three or four decades — where they can revoke someone’s clearance without giving any explanation.

But generally, you have to have an explanation in writing. There’s 13 adjudicative guidelines, A through M, that set forth the disqualifying conditions that would justify denial or revocation. None of them involve political views. The closest is if you advocate the violent overthrow of the US government, which, of course, is not what this is about.

So the Trump administration would be hard-pressed, as a general rule, to say that any of these individuals should have their clearance, their trustworthiness, revoked based on political views. There are substantive grounds for some of the individuals who have been named. McCabe is obvious — he has the IG report; you can argue Comey improperly released information to his friend at Columbia; Clapper lied to Congress, as an argument. Brennan and Hayden, not a clue of what substantively they’ve ever done to justify their revocation of a clearance other than politically opposing Trump. So those would be hard-pressed, even though I do believe the president has the authority to take that action.

The better way would be not to revoke their clearance, but to simply say that they no longer have “a need to know” and restrict their access or eliminate their access. That does not require due process. It’s not an unfavorable action against their clearance; they retain their eligibility — they just no longer have access. So if Trump did that, which he definitely has the legal authority to do, that eliminates a lot of the problems that otherwise would exist, though it still smacks of politicization and Nazi Germany.

So it seems by publicly revoking clearances, Trump is really going on the record and politicizing this more than he has to.

The Trump administration does what it usually does for its base, and this really motivates their base. The 25 to 35 percent who are just die-hard — he can shoot someone in Times Square and nobody would care — they despise all these people who he has named. Even at a lot of the Republicans who don’t necessarily [support this], they’re still probably against Brennan and Clapper. There’s probably half the country, regardless, who’s cheering this on even though what it represents is a horrible precedent for our country.

Well, besides the erosion of norms, are the most practical consequence just that these guys can’t get consulting gigs?

Well, yes, it might be. Most of these guys end up on the board of directors of some big defense contractor, making a lot of money. But the reality is — and I think Comey and Hayden have already publicly commented, “We don’t use our clearance; we really don’t care.” They’re certainly not being brought back into the government to talk to their successors. The reality is they probably could care less about their clearances; it’s still the precedent that’s being set, to set back the entire security establishment that we’ve created over the last 75 years.

Is there anything big that I might be missing?

One thing to understand — because I’m sure people are already saying, “This is a violation of their First Amendment rights and they’ll sue” — they can’t sue. I mean, anybody can sue, you can sue for anything, but they have no basis. There’s a Supreme Court precedent from 30 years ago that restricts federal judges from handling security clearance appeals. This really is the power of the executive branch. And it’s an unchecked power at this stage.