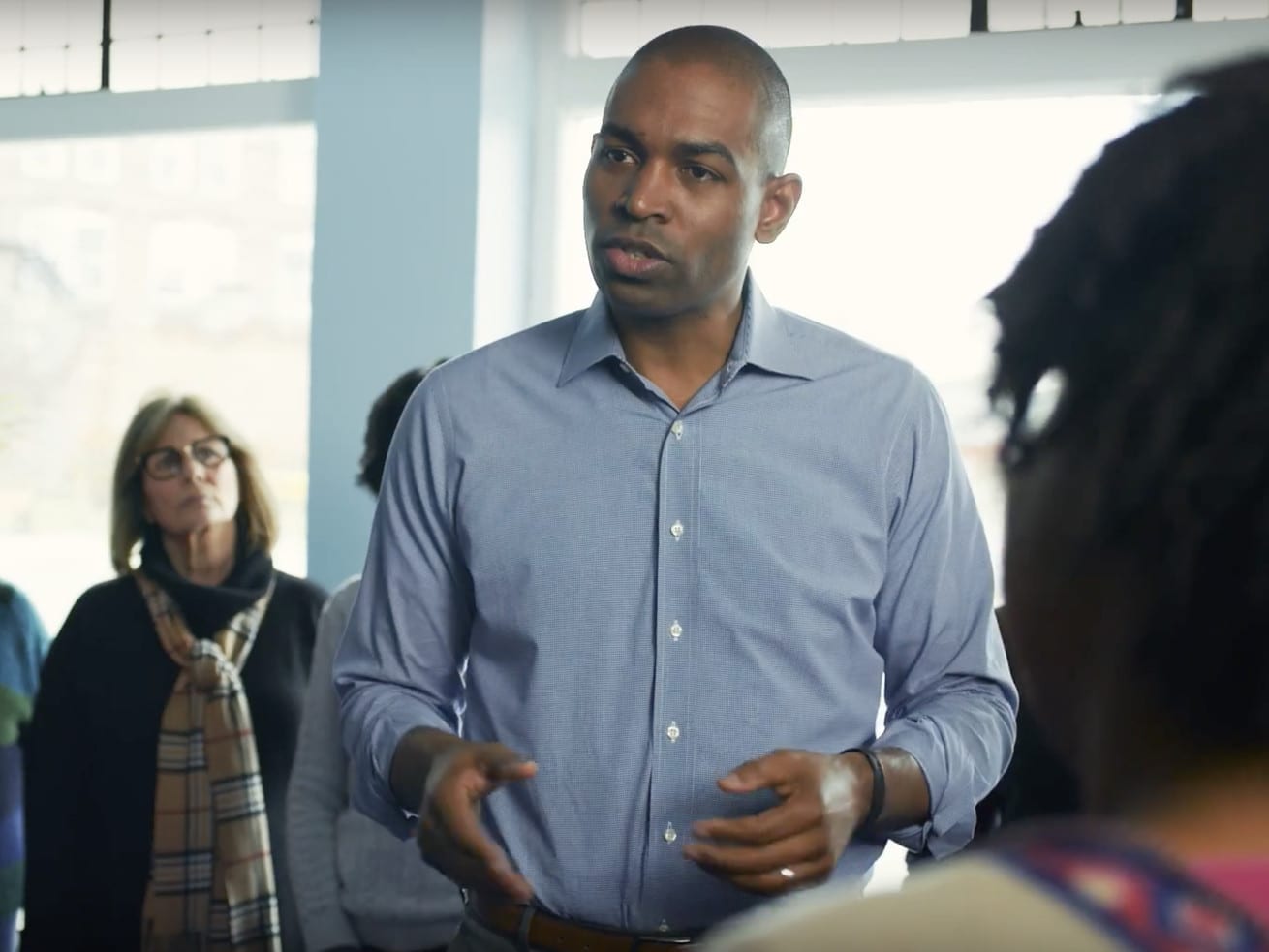 A black Harvard Law grad is running for office. All the GOP wants to discuss is his time as a rapper.

The ad shows a series of speakers, all white, briefly discussing why they can’t vote for the candidate. “Antonio Delgado would be fine in Los Angeles, maybe New York City,” one man says. A woman in the ad says that “a vote for Antonio Delgado is a vote for Nancy Pelosi.”

As the ad continues, speakers vaguely say that Delgado has said offensive things, without clarifying what they are referring to. “Nobody talks like that, it’s offensive,” the man from the beginning of the ad explains. A woman says, “It’s degrading to women and I’m personally offended.”

The NRCC ad is likely confusing for those who have not been following the race, as there’s never any explicit statement of what exactly is “offensive” or “degrading to women” about Delgado. But this ad is just the latest in a string of campaign advertisements criticizing the Democrat — a Rhodes Scholar and Harvard Law grad — for a brief stint a decade ago as a rapper named “AD the Voice.”

“Mr. Delgado’s lyrics paint an ugly and false picture of America,” Faso said in July. After an editorial in the New York Times argued that messaging around Delgado’s music career was “exploiting painful racial divisions,” Faso sent a letter to the newspaper arguing that his criticism of Delgado had nothing to do with race. “He is obligated to explain what he meant by the songs he wrote, which denigrated our nation and the free enterprise system, and often glorified pornography and drug use,” Faso wrote.

Delgado, who would be the first nonwhite representative of the 19th District if elected, says his past lyrics are being taken out of context in an attempt to “otherize” him from voters in the district, which is one of the whitest in the country, according to the Times. And the NRCC’s latest ad, which comes shortly before the midterm elections, calls renewed attention to the ways candidates of color have been subjected to racially coded and outwardly racist attacks in 2018.

For the past few months, the NRCC and other groups have argued that Delgado is not suited to represent the district, pointing to lyrics from Painfully Free, a 2006 album that offered social commentary on topics including the federal response to Hurricane Katrina, the Iraq War, and capitalism.

In July, the Congressional Leadership Fund, a conservative Super PAC, aired a radio ad calling the singles from the album a “sonic blast of hateful rhetoric and anti-American views.” In August, the group released a spot referring to Delgado as a “New York City liberal” and “Pelosi’s candidate” before segueing into a review of his old song lyrics.

“Antonio Delgado can’t be our voice in Congress,” the ad concludes.

In September, the NRCC released an ad juxtaposing lyrics from Delgado’s old songs against clips from his recent campaign ads. The ad highlighted lyrics where Delgado spoke about sex, criticized white supremacy, and used the n-word.

Jesse Hunt, the national press secretary for the NRCC, disagreed, telling the Post that “if Democrats are upset about Antonio Delgado’s own rap lyrics being used in ads then they shouldn’t have nominated him.”

Conservatives criticizing rap isn’t anything new, but it has attracted more attention in the era of Donald Trump. Earlier this year, Trump criticized Jay-Z for using “filthy” language at a concert for Hillary Clinton, adding that the rapper’s lyrics “made me look like the most clean-cut human being on Earth.” Just months before, the rapper had criticized Trump for racist comments about black countries.

And while Trump claims supporters like Kanye West will help him gain support among black voters, Republicans have continued to criticize rap as deviant and in opposition to their values.

It gets at a broader issue that has been magnified in the 2018 midterms. Republican politicians in states across the country are running campaigns that traffic in bigotry and play up fears of minorities. And in races where a Republican candidate is facing off against a nonwhite opponent, these attacks have often been amplified.

The attacks are not limited to Delgado. In Florida, Andrew Gillum has faced racist robocalls from a neo-Nazi group where a person pretending to be Gillum speaks with an exaggerated minstrel dialect. In Nevada, black attorney general candidate Aaron Ford has been criticized for a series of arrests that occurred in the early 1990s. And in California, Republican Rep. Duncan Hunter has made baseless claims that his Mexican-Palestinian-American opponent, Ammar Campa-Najjar, is a “security threat.” As a list from the Huffington Post illustrates, these are just some of the many attacks candidates of color have faced in 2018.

These attacks have suggested that Republican politicians are relying on a playbook Trump used as a candidate in 2016 to repeatedly stoke fear of minorities among white voters. Even now, Trump has continued these sorts of arguments by claiming with zero evidence that the migrant caravan heading toward the US is full of criminals and calling for police in Chicago to implement “stop and frisk.” It fits into the broader GOP’s willingness to lean into white identity politics in an effort to charge up its base ahead of the election.

Delgado, for his part, he told the New York Times in October that despite the attacks, he remains unapologetic for his old music. “I’m very committed to the themes that I was concerned about then, chief among them people on the margins,” he said. “So for me to apologize, I would in essence be apologizing for what I am doing today.”

Trump reportedly wanted Bill Barr to give a press conference about his Ukraine call
Romance novelists speak out on the harassment they face online
Who is Trump latest pardon? Far-Right and Fascist Dinesh D'Souza
Steve Mnuchin’s efforts to spin Trump’s Ukraine scandal were a disaster
The police shooting of Jacob Blake, explained
“This is just my hunch”: Trump goes on Fox News and spreads misinformation about the coronavirus