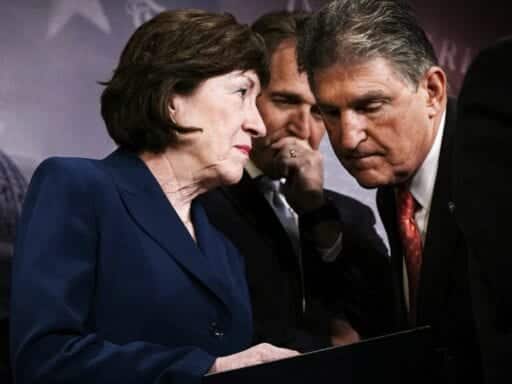 These lawmakers were among the swing senators who ultimately voted to confirm him.

Last fall, several senators who proved to be crucial swing votes for Brett Kavanaugh’s Supreme Court confirmation cited their confidence in an FBI report as part of their rationale for supporting him.

A recent New York Times report, however, reveals a pretty big problem with this reasoning, calling the legitimacy of that FBI review into question, and putting those lawmakers back on the spot.

The FBI investigation, which was conducted in the span of a week, was intended to review sexual misconduct allegations that had been brought against Kavanaugh by Palo Alto University professor Christine Blasey Ford and former Yale classmate Deborah Ramirez. (Kavanaugh has denied both allegations.) Undecided senators — including Republicans Jeff Flake and Susan Collins, and Democrat Joe Manchin — said that the probe helped assuage their concerns about Kavanaugh’s nomination.

“I think Susan Collins was quoted saying it was very thorough but no new corroborative information came out of it. That’s accurate,” Flake said at the time, noting that he did not see any new evidence backing up allegations by Blasey Ford and Ramirez.

Thus far, Flake, Collins, and Manchin have not publicly commented on the New York Times story or responded to a request for comment.

While Democrats had long been concerned about the narrow scope of the investigation and its rushed nature, a Saturday evening Times report from Robin Pogrebin and Kate Kelly highlights just how much officials may have missed.

According to Pogrebin and Kelly’s piece, about two dozen people could offer some level of corroboration for a sexual misconduct allegation raised by Ramirez, who accused Kavanaugh of thrusting his genitals in her face without consent. Additionally, Pogrebin and Kelly uncovered another allegation from a different Yale classmate, who says he witnessed Kavanaugh engaging in similar behavior at a second party, though the woman involved does not reportedly recall the incident.

The FBI, Pogrebin and Kelly write, did not reach out to additional witnesses about either account.

Democrats had previously argued that a major shortcoming of the FBI investigation was how incomplete it wound up being. The report ultimately included interviews with just nine individuals, who did not include Ford or Kavanaugh. Ramirez was interviewed by agency officials, though her attorney John Clune wondered why witnesses she had offered up to corroborate her account were not contacted.

“The most notable part of this report is what’s not in it,” Sen. Dianne Feinstein, the top Democrat on the Judiciary Committee, said last year. Pogrebin and Kelly’s New York Times piece highlights how true this statement was — and renews the spotlight on lawmakers who dismissed those concerns.

For three key lawmakers, the FBI report played a central role in their decision on Kavanaugh

The murkiness around the FBI report is important because of the outsized role it eventually played in Kavanaugh’s confirmation.

Although Kavanaugh was initially expected to sail through to confirmation, given the Senate’s 51-49 Republican majority last term, multiple allegations of sexual misconduct spurred grave questions about his nomination. As scrutiny of these allegations increased, a small group of swing senators, including Flake, Collins, and fellow Republican Sen. Lisa Murkowski, were no longer seen as solid votes in favor of Kavanaugh. At this juncture, an FBI investigation was viewed as one way to put outstanding worries about the allegations to rest and maintain Kavanaugh’s Republican support.

For Flake, especially, it was a review that appeared to provide much-needed political cover, while allaying questions he still had about Kavanaugh. Flake, after all, was the Republican lawmaker who made a decisive push for the investigation in the face of broader resistance from his party.

At the time, Flake leveraged his position as an undecided senator to make a case for it, and argued that it was necessary to protect the sanctity of the confirmation process. “I’m a conservative. I would love to see Judge Kavanaugh confirmed. And I hope to be able to do that, but I want a better process,” he said. The contents of the report were seen as a make-or-break update for a handful of undecided lawmakers, himself included.

Roughly a week later, Flake decided that he was satisfied with what the completed report had found. Collins and Manchin, both of whom voted in favor of Kavanaugh, also wound up making the same decision, while Murkowski and two Democrats, Heidi Heitkamp and Joe Donnelly, leaned the other way.

“Based on all of the information I have available to me, including the recently completed FBI report, I have found Judge Kavanaugh to be a qualified jurist who will follow the Constitution and determine cases based on the legal findings before him,” Manchin noted in a statement backing Kavanaugh.

The New York Times report now casts even more doubt on the FBI report as a deciding piece of evidence in senators’ votes on Kavanaugh. It also raises the question of whether some of these pivotal swing Senators would have voted the same way if they had known how incomplete it was. (Given how aggressively Republicans were pushing for Kavanaugh’s confirmation in spite of the sexual misconduct allegations, it’s possible the outcome would have been the same.)

According to Pogrebin and Kelly’s piece, there were a lot of people the FBI did not contact, who reached out with additional evidence about the sexual misconduct allegations:

We also uncovered a previously unreported story about Mr. Kavanaugh in his freshman year that echoes Ms. Ramirez’s allegation. A classmate, Max Stier, saw Mr. Kavanaugh with his pants down at a different drunken dorm party, where friends pushed his penis into the hand of a female student. Mr. Stier, who runs a nonprofit organization in Washington, notified senators and the F.B.I. about this account, but the F.B.I. did not investigate and Mr. Stier has declined to discuss it publicly. We corroborated the story with two officials who have communicated with Mr. Stier; the female student declined to be interviewed and friends say she does not recall the episode.

Ms. Ramirez’s legal team gave the F.B.I. a list of at least 25 individuals who may have had corroborating evidence [for her allegation of sexual misconduct]. But the bureau — in its supplemental background investigation — interviewed none of them, though we learned many of these potential witnesses tried in vain to reach the F.B.I. on their own.

Two F.B.I. agents interviewed Ms. Ramirez, telling her that they found her “credible.” But the Republican-controlled Senate had imposed strict limits on the investigation. “‘We have to wait to get authorization to do anything else,’” Bill Pittard, one of Ms. Ramirez’s lawyers, recalled the agents saying. “It was almost a little apologetic.”

For Collins, who’s up for reelection in Maine next year, her support for Kavanaugh is now facing fresh scrutiny as part of the 2020 cycle. Sara Gideon, one of the Democratic candidates vying for her seat, posted a tweet calling out her vote in the wake of the Times story.

I’m tired of hoping that Susan Collins does the right thing when she has shown time and time again that she puts Donald Trump and Mitch McConnell ahead of Mainers.

If you’re with me, please make a contribution to our campaign today.

While the Times piece looks specifically at the additional witnesses the FBI did not approach as it relates to Ramirez’s allegation, it also prompts a major question around how many other witnesses law enforcement officials declined to survey regarding Ford’s claim and other tips that were received.

Nearly one year after his confirmation, more questions are still emerging about Kavanaugh’s contentious confirmation process — and lawmakers’ willingness to confront the numerous allegations he faced.

The census will continue until October 31, despite the Trump administration’s attempts to end it ear...
The Joe Rogan controversy revealed something important about the American left
The US House’s Supreme Court defense of its Trump investigation was a disaster
Mysterious emails and convenient leaks: The Trump campaign’s Hunter Biden attacks, explained
These uses of CO2 could cut emissions — and make trillions of dollars
Here’s Facebook’s new plan to make you shop on Instagram