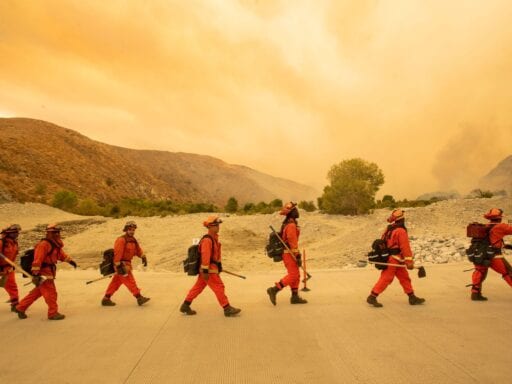 Share
Loading...
Inmate firefighters arrive at the scene of the Water fire, a new start about 20 miles from the Apple fire in Whitewater, California on August 2, 2020. | JOSH EDELSON/AFP via Getty Images

California is facing a historic fire season and a shortage of firefighters.

On Friday, California Gov. Gavin Newsom signed a bill that would make it easier for the state’s inmate firefighters to pursue a career in the field after their release.

The bill clears the way for inmates who serve as firefighters to have their convictions expunged upon release, according to state assemblywoman Eloise Reyes, who sponsored the bill, and to apply for most types of state licenses — including EMT certification, which is needed for most full time municipal jobs — without listing their prior convictions.

Previously, anyone convicted of a felony in California was barred from receiving an EMT certification for a decade after their release; those convicted of multiple felonies were potentially barred for life. Now, inmate firefighters will have a far better chance of finding work at municipal fire departments.

“Signing AB 2147 into law is about giving second chances. To correct is to right a wrong; to rehabilitate is to restore,” Reyes said in a statement Friday. “Rehabilitation without strategies to ensure the formerly incarcerated have a career, is a pathway to recidivism.”

The bill is a long time in coming: California, where wildfires are a seasonal threat, has long employed inmate firefighters. According to NPR, they’ve made up more than a fifth of the state’s fire crews in recent years, and this year some 2,200 incarcerated people are facing down a historic fire season on the front lines.

But while incarcerated firefighters usually make up a significant proportion of California’s firefighting force, the coronavirus pandemic means that there are fewer on the job this year. Prisons have been hard-hit by the pandemic, and in California, many inmates — more than 11,000 as of the end of August — have been released early to limit infection.

That, of course, means there are fewer incarcerated people available to join fire crews — putting strain on the state’s firefighting capacity, which already suffered from a shortage of firefighters. As the San Francisco Chronicle reported last month, unprecedented wildfires up and down the West Coast mean that California isn’t getting nearly as much firefighting help from other states as it has in past years, with crews in Oregon and Washington focused on blazes in their home states.

The pandemic is affecting fire crews as well; as Vox’s Umair Irfan reported, other countries have been hesitant to send their firefighters given the US’ inability to manage its Covid-19 infection rate. And some firefighters have also been forced to quarantine because of coronavirus exposure.

It’s a bad year to be short on firefighters. In northern California, the August Complex fire has become the largest in history; statewide, more than 3 million acres have burned already this year, compared to 118,000 acres after the first week of September 2019.

Neighboring Oregon may be even worse off: Around half a million people — ten percent of the state’s population — are currently under evacuation orders, and large swaths of several towns have been “substantially destroyed,” according to Oregon Gov. Kate Brown.

Fires also menaced Portland, Oregon, earlier this week. On Friday, state emergency management warned of a potential “mass fatality incident based on what we know and the number of structures that have been lost.”

Conditions are similar in Washington state, where there were 14 active fires as of Friday. Fully 80 percent of all structures in Malden, Washington — which is about 35 miles outside of Spokane — were destroyed earlier this week.

As my colleague Umair Irfan explained Friday, there’s a reason — multiple reasons, really — for this unprecedented level of devastation. A dry summer, a heat wave, and high winds have all made things worse, as did a “dry lightning” storm in California last month, which caused at least 300 fires.

Those are the immediate factors, but the blazes can all be tied directly to climate change, as well, as Vox’s Eliza Barclay, David Roberts, and Umair Irfan detailed earlier this week. Essentially, they write, climate change has led to more arid conditions in Western states, creating conditions for fires to start, and spread, more easily than was possible in previous centuries.

Beyond property destruction and growing loss of life, another consequence of the fires is the pall of smoke, and even falling ash in California’s Bay Area, that has blanketed the West Coast. As of Saturday, Seattle, Washington; Portland, Oregon; and San Francisco, California, as well as Vancouver, British Columbia, have the worst air quality anywhere in the world. In many places, the sky has turned an eerie orange that has elicited comparisons to Blade Runner — but it’s also toxic. Irfan explains:

Such reductions in air quality can have devastating consequences for respiratory and cardiovascular health, increasing the rates of heart attacks, asthma attacks, and strokes. Around the world, pollution from tiny particles like those from wildfire smoke remains one of the largest health threats to humanity.

As bad as the fires have been so far though, things may not get better anytime soon. In a “Significant Wildland Fire Potential Outlook” published by the National Interagency Fire Center earlier this month, the agency warned that “a continuation of peak season activity into September is expected across much of the West as drought conditions continue to take hold,” though things could improve later in the month.

That’s the outlook for this fire season. In the long run, of course, climate change is still happening — and historic fire seasons could increasingly become the new normal.

Polling data shows Republicans turned out for Trump in 2016 because of the Supreme Court
Honesty first: how to make politicians pay for lying
MJ Hegar: a mom, veteran and now politician
“In a perfect world, they’d be running mates”: New Hampshire voters are torn between Sanders and War...
CNN is giving 2020 Democrats 7 hours to talk about climate change
U.S. Claire McCaskill of Missour has a rib cracked by a fellow senator

Seashells changed the world. Now they’re teaching us about the future of the oceans.