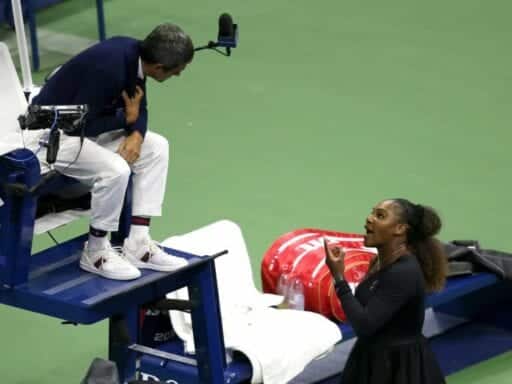 The depiction of Serena Williams was disappointing, but not unprecedented.

An Australian newspaper ran a nasty editorial cartoon on Monday, attempting to capture the fallout of the contentious US Open women’s final that ended in controversy over the weekend.

Herald-Sun cartoonist Mark Knight’s image shows a monstrous, hulking depiction of Serena Williams stomping her racket into the ground. A discarded pacifier lies nearby, as if Williams is a toddler throwing a tantrum. In the background, umpire Carlos Ramos asks her opponent, Naomi Osaka, “Can you just let her win?” (update: Knight’s account is now inactive)

The women’s final ended with Osaka winning the match, after Williams got into a dispute with Ramos over scoring penalties. The penalties followed an initial verbal warning that Ramos issued to Williams about receiving coaching from the sidelines. Williams first challenged Ramos over the coaching call; later, after Williams smashed her racket in frustration over losing a game, Ramos penalized her by a point for the racket abuse.

After that, Williams called him a “thief,” and he ultimately penalized her by an entire game for what he said was verbal abuse. Both during and after the match, Williams called out the sexist double standards that she says colored Ramos’s calls, specifically noting that many male tennis players have not been penalized as harshly (or at all) for similar (or worse) outbursts.

Whether or not you think Williams’s behavior during the match warranted the penalties that eventually cost her the game, Knight’s depiction of Williams is a jarring reminder of insidious, racist tropes that undercut black women in America. And Williams has repeatedly been a target of those tropes — despite the fact that she’s one of the most prominent, successful athletes in the world, regardless of gender — throughout her storied career.

(For contrast, it’s worth noting how Osaka, who is Japanese and Haitian, is depicted in the cartoon as lithe, expressionless, and, as some have observed, seemingly whitewashed.)

Knight’s cartoon is a literal illustration of the way society is quick to degrade women — and black women in particular — when they don’t fall in line with the ways women are “supposed” to act. Not only is Williams depicted as a petulant toddler for having spoken up about what she felt was a sexist call, but also as a hulking, animal-like brute.

As Jenée Desmond-Harris has previously detailed for Vox, Williams’s career has long been marked by racist remarks and assumptions made by tennis spectators, fellow players, and the media. After Williams won the French Open in 2015, for example, Desmond-Harris wrote:

Williams was compared to an animal, likened to a man, and deemed frightening and horrifyingly unattractive. One Twitter user wrote that Williams “looks like a gorilla, and sounds like a gorilla when she grunts while hitting the ball. In conclusion, she is a gorilla.” And another described her as “so unbelievably dominant … and manly.”

Knight’s cartoon picks up these assertions and runs with them.

Williams’s body, like the bodies of many other women athletes, is under constant scrutiny. But as a muscular black woman whose career is full of wins, Williams regularly becomes the subject of commentary that is simply degrading at best, and openly racist at worst. It often harks back to a time when women of color were treated like curiosities, or even worse, zoological attractions.

Knight’s illustration seems to equate Williams with figures like Saartjie Baartman, also known as the Hottentot Venus, an African woman who was paraded before European audiences as nothing more than a freak-show attraction. “No matter how insanely successful black women like Serena become, the legacy of the Hottentot Venus will always be ready to rear its ugly head at an opportune moment,” Anita Little wrote in 2012 for Ms. Magazine.

Little also described a 2012 incident where Danish tennis player Caroline Wozniacki mocked Williams’s body by stuffing her outfit with towels at an exhibition match. “If Caroline truly wanted to impersonate Serena,” Little wrote, “she could have padded her legs and arms to represent Serena’s muscled physique, but she targeted specific body parts — breasts and booty — for her little prank. The supposed hypersexuality of a black woman’s anatomy is a ceaseless trope that is always used to get a laugh. The racist undertones of Caroline’s stunt may not have been deliberate, but that doesn’t mean they weren’t there.”

In a Herald Sun article responding to the fallout, Knight defended the cartoon, saying it “is about her poor behaviour on the day, not about race. The world has just gone crazy.” But of course, the cartoon does not have to be “about race” to feature racist imagery. As Noah Berlatsky, author of Wonder Woman: Bondage and Feminism in the Marston/Peter Comics, told the New York Times, racist imagery has plagued cartooning for generations.

Williams’s detractors have singled out her body as mockable, and her femininity as debatable, because of her strength and skill. She’s often been reduced to an amalgamation of hypersexual body parts or described as animal-like. But while her fellow players, media commentators, and tennis fans ridicule her body, Williams has no problem calling out this problematic double standard. Above all, though, she just keeps playing because that is simply what she does.

“We’re gonna have to see what happens”: Trump’s comments about the peaceful transfer of power, expla...
The complicated relief of the Chauvin verdict
Swing-state Pennsylvanians are divided on fracking. Here’s why.
Regulators are trying to get Musk to run his tweets by lawyers. It’s not working.
Elise Stefanik’s impeachment moment
The pop cultural obsession with Princess Diana’s innocence, explained