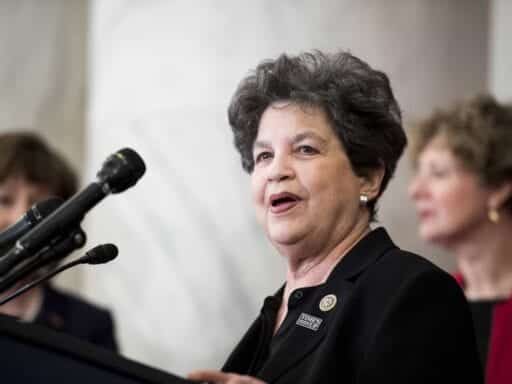 The bill has bipartisan support (!), but it probably won’t go far anyway.

Republicans and Democrats agree on few things these days. But some members of Congress on both sides of the aisle seem to agree on this: Businesses should not be able to hide claims of sexual harassment against them from the public, and they should not force female workers (or any workers) to stay silent about it.

On Wednesday afternoon, a bipartisan group of representatives will introduce a bill that would bar employers from requiring workers to sign nondisclosure and nondisparagement agreements. These clauses are common in job contracts, essentially making it illegal for workers to say bad things about a company, or from discussing workplace disputes, such as sexual harassment claims.

The bill, called the EMPOWER ACT, would outlaw that practice entirely, according to the office of Rep. Lois Frankel (D-FL), who is sponsoring the bill with Reps. Ted Poe (R-TX), Barbara Comstock (R-VA), Jerry Nadler (D-NY), and Lisa Blunt Rochester (D-DE). The bill would also require publicly held companies to provide employees with sexual harassment training, and to disclose the number of workplace harassment claims it settles each year and the amount paid out. The Senate introduced its own version of the bill last month.

The bill is a direct response to the waves of sexual harassment complaints that have come to light in the #MeToo era, and in particular, to the measures companies have used to keep women from talking about it for years.

“These clauses that perpetuate the culture of silence should not be permitted,” the bill sponsors wrote in a summary that was shared with Vox. “This practice has allowed employees who harass to quietly settle, essentially paying for the privilege to abuse.”

Nondisclosure agreements (NDAs) have been around for nearly a century, though they were originally used in business contracts to protect trade secrets. By the 1980s, they were standard language in white-collar job contracts and legal settlements. Because NDAs revolve around secrecy, the scope of their use was relatively unknown.

Then the Weinstein scandal broke. The New York Times’ report on sexual harassment allegations against Hollywood producer Harvey Weinstein shined a spotlight on how companies use these clauses to hide potentially illegal behavior toward women. Employees who worked at the company were required to sign nondisparagement clauses, and women who complained about harassment had to sign NDAs in legal settlements, which allowed Weinstein to continue abusing women under the radar.

Other women who have tried to share their stories of harassment at work have realized that they can’t. Former Fox News contributor Gretchen Carlson, who accused Roger Ailes of harassment, was one of many women at the company who signed a confidentiality clause, though she decided to speak out anyway (Fox News has not sued her for violating her contract).

Women who violate these agreements could face hundreds of thousands of dollars in fines, depending on the details of the contract. Many of Carlson’s colleagues at Fox remained anonymous in describing their experience to journalists, fearing they would be breaching their contracts.

No data exists on how many companies require workers to sign these agreements, but they have become increasingly common in hiring contracts in the tech industry.

Since the Weinstein story broke, the flood of #MeToo stories that have followed has put pressure on Congress to do something about widespread sexual harassment of female workers. Members of Congress — mostly women — have introduced a number of bills to address the issue, from the Ending Forced Arbitration of Sexual Harassment Act to the Combat Sexual Harassment in Housing Act.

Their efforts haven’t gone far yet, as Republican leaders have not put the bills to a vote. The closest Congress has come to action was passing Senate and House bills to amend the Government Accountability Act, which would require members of Congress to report sexual harassment settlements they are involved in, and which would prohibit them from using taxpayer money to settle those claims. While the Senate and House passed their own versions of the bill, efforts at a compromise final bill have stalled.

The EMPOWER Act may languish too, or it may put more pressure on Republican leaders to vote. Last month, Sens. Lisa Murkowski (R-AL) and Kamala Harris (D-NY) introduced the Senate version of the bill.

But so far, nothing has happened. Even though both bills have bipartisan support, they would need to get support from House and Senate leaders too. But Senate Majority Leader Mitch McConnell and House Speaker Paul Ryan have shown little interest in tackling sexual harassment.