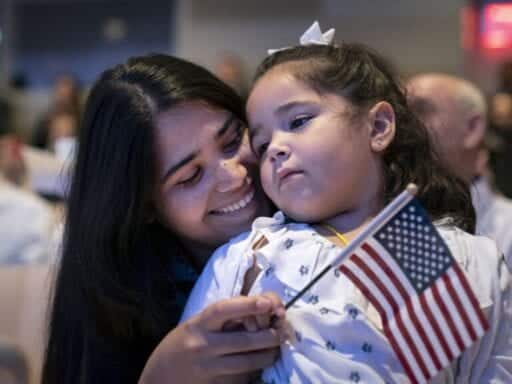 It appears that the idea of the “American Dream” has some truth.

The adult children of immigrants, almost universally, show more upward economic mobility than their peers whose parents were born in the United States. Indeed, a new working paper by Stanford University’s Ran Abramitzky; Princeton University’s Leah Platt Boustan and Elisa Jácome; and the University of California Davis’ Santiago Pérez finds that this is especially true for the lowest-income immigrants and remains true for the most recent cohorts for which data is available.

Drawing from census data, publicly available administrative data, and federal income tax data, they traced the income levels of millions of fathers and sons over time dating back to 1880. The children of immigrants climbed higher in the income rankings than those born to US natives across history and in 44 of the 47 sending countries they studied.

The paper contradicts President Donald Trump’s rhetoric suggesting that immigrants drain the social safety net rather than pulling themselves up and that immigrants from a select few countries are more desirable than others. On that basis, the president has pursued numerous policies aimed at preventing low-income immigrants, particularly those from what he has referred to as “shithole countries,” from entering and settling in the US.

Prior research has shown that immigrants who start out earning less than their US-born peers are unlikely to catch up in their lifetimes. And among more recent immigrants, that initial income gap is growing bigger and harder to close.

But the new study shows that, even if immigrants start out with low income levels, most are not only catching up eventually but surpassing their US-born peers — even if it takes a generation.

The typical explanation offered for this kind of immigrant achievement is some inherent quality resulting from cultural differences, such as a strong work ethic or placing a value on education. But the working paper offers a more tangible explanation for the mobility gap: Immigrants tend to settle where there is more economic opportunity and take jobs that are below their true skill level.

“We don’t even have to reach for these cultural explanations,” Boustan said in an interview. “A lot of it has to do with immigrants being willing to move anywhere and choosing locations where there are growing industries and a good set of job opportunities for their kids. Those are choices that immigrants are making that are different from the US-born and that could be a feature of immigrant success.”

It makes sense why immigrants choose to move to areas of higher economic opportunity as compared to the US-born. Without social and professional networks anchoring them to one place, they are more “footloose” and flexible in where they ultimately settle, Abramitzky said. Historically, that has meant that foreign-born populations tend to cluster in urban areas.

The first generation arriving in the US, however, might also have difficulty finding work at income levels that reflect their true talents and abilities due to a variety of factors: limited English skills, lack of an established professional network in the US, and discrimination, Boustan said.

A classic scenario might be a Russian scientist who comes to the US and works as a cab driver. In that case, the second generation might be able to move up more quickly than their father’s income ranking would suggest.

“What might matter for the kids is what their father’s true talents and abilities were, rather than where he gets placed in the labor market,” Boustan said.

The economic mobility gap, the paper finds, is particularly stark when examining the children of those on the lowest rungs of the income ladder, ranked below the 25th percentile. In that category, the children of immigrants climb three to six percentile rank points higher than the children of natives.

The gap narrows, however, when examining families from the top income levels. And it even reverses slightly when comparing children growing up in the same geographic area.

The paper, while expansive, has some limitations: It relies on federal income tax records that likely do not capture unauthorized immigrants, the primary target of the president’s ire as he attempts to make the southern border all but impenetrable to migrants from Central America attempting to cross illegally.

But it’s reasonable to speculate that unauthorized immigrants would also settle in areas of economic opportunity and take jobs below their skill level, potentially resulting in similar rates of economic mobility as compared to other immigrants, the researchers said. The only caveat could be that unauthorized immigrants and their children experience more discrimination in the US, limiting their access to higher-paying jobs.

All kinds of immigrants move up the ladder

Boustan said the paper pushes back on the idea of “model minorities”: that minorities from certain ethnic or racial backgrounds tend to find more socioeconomic success than others. It’s typically been used to describe Asians in contrast to Hispanics and African Americans. But regardless of race or ethnicity, children of immigrants from the overwhelming majority of the countries they studied performed better than the US-born.

The paper’s findings also challenge Trump’s ideas about who should be allowed to immigrate to the US.

In January 2018, he reportedly derided immigrants from what he considers “shithole countries,” including El Salvador and African nations, while simultaneously calling for “more people from Norway.” And he infamously maligned Mexican immigrants when launching his campaign for president in 2015.

“When Mexico sends its people, they’re not sending their best,” he said. “They’re sending people that have lots of problems, and they’re bringing those problems with us.”

“We take it as a warning against taking a nostalgic view of immigration,” Abramitzky said.

America’s meat shortage is more serious than your missing hamburgers
“You little pencil neck”: Trump’s taunts of Schiff in Toledo were like a parody of a playground bull...
Prince Andrew steps back from public duties after Jeffrey Epstein interview
Why Beatrix Potter self-published Peter Rabbit
Special counsel Robert Mueller has agreed to testify in front of Congress
Women are running — and winning — in 2018