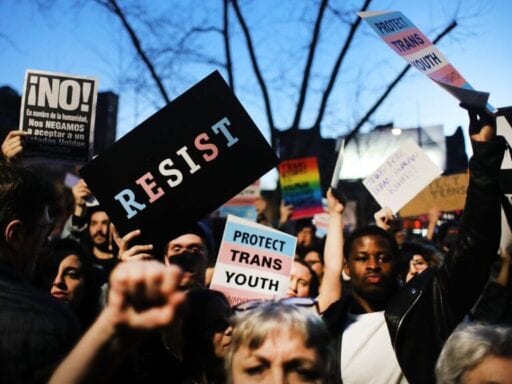 The proposal is part of a bigger pattern.

Foster care agencies could soon turn away prospective foster parents because they are gay or trans, thanks to a rule proposed by the Trump administration on Friday.

The rule would remove language protecting LGBTQ people and others from discrimination in programs funded by grants from the Department of Health and Human Services, according to the Washington Post.

The change would apply to a wide range of programs, including those aimed at HIV prevention and treatment for opioid addiction and other substance abuse. But advocates say it appears targeted at the child welfare system, where it could have devastating effects, including keeping children from finding homes and even funneling them into the prison system.

“If you turn away a qualified, loving family that wants to open their home to a child, then you’re not placing a child,” Denise Brogan-Kator, chief policy officer of Family Equality, a group that advocates for the rights of LGBTQ families, told Vox.

Because the change is broad, it would also allow programs to discriminate on the basis of religion — for example, by refusing to allow non-Christian couples to adopt or foster children. It could also allow foster care agencies to refuse to take in gay or trans youth.

The move, which the Trump administration says is necessary to protect religious freedom, is part of a long list of actions the administration has taken to strip anti-discrimination protections from LGBTQ Americans. Earlier this year, the Supreme Court allowed the president’s ban on trans people serving in the military to go into effect. Also this year, the Trump administration finalized a rule allowing providers to refuse to offer transition-related care if it violates their religious beliefs (though a federal judge struck that rule down on Wednesday).

Advocates say these changes will do yet more harm to Americans who are already experiencing discrimination every day. The foster care rule is a way for Trump “to target communities where he’s already targeting, but in a way where he can seem like he’s protecting his constituents,” Lucina Kayee, a foster care advocate who spent years in the foster care system herself, told Vox.

The most recent proposed rule change, announced Friday, would eliminate language introduced during the Obama administration stating that, “no person otherwise eligible will be excluded from participation in, denied the benefits of, or subjected to discrimination in the administration of HHS programs and services based on non-merit factors such as age, disability, sex, race, color, national origin, religion, gender identity, or sexual orientation.”

Under the proposed Trump administration rule, people would only be protected from discrimination in HHS programs to the extent that such discrimination is already banned by federal statute. There is no such law banning discrimination on the basis of gender identity or sexual orientation, so the new rule would allow recipients of HHS grants, such as foster care agencies or substance use recovery programs, to discriminate against LGBTQ people. While the rule is not yet final, the administration has announced that it will stop enforcing Obama-era discrimination protections immediately, leaving agencies free to begin turning away LGBTQ people and others with no consequences.

The move could greatly affect LGBTQ parents and prospective parents, who are disproportionately likely to adopt or foster children. While 3 percent of different-sex parents have an adopted child, 21.4 percent of same-sex parents have adopted, according to a 2018 report.

It would also affect children, who could miss out on possible placements if agencies turn away LGBTQ families. There are more than 400,000 children in the US foster care system, including 114,000 who can’t be returned to their families and need to be adopted, the New York Times reports.

If there are fewer potential foster homes for children, more kids will live in institutional settings like shelters or residential treatment facilities, Kayee said. She spent time in both after being removed from the home she shared with her stepfather in Minnesota, where they had come as political refugees from Liberia.

At the facilities where she lived, staff used solitary confinement to punish kids, she told Vox. She was first placed in solitary at the age of eight, after refusing to let a white staff member touch her hair. The room was “freezing cold,” and she could hear mice in the walls, she said.

Kayee knew she was queer by the time she was 10 or 11, but she hid both her sexuality and her religion — she has both Muslim and Christian family members — in the facility where she lived then. She’d seen how a boy was treated when he came out: The staff “went from treating him like this angel to this infected being,” she said.

The rule change could mean LGBTQ youth like Kayee are less likely to find LGBTQ-affirming homes, which can mean the difference between being treated like a burden and being celebrated for who they are. When “you don’t see anyone that looks like you,” Kayee said, “you start to think you’re the problem.” But “being in a placement where someone not only affirms you but continues to uplift your identity, you know that, I was meant to be here.”

The rule could even allow foster care or adoption agencies to simply refuse to care for LGBTQ youth, Brogan-Kator said. Currently, when government officials remove a child from a home environment or otherwise decide that child needs foster care, they will call foster care agencies to ask if they can take the child, according to Brogan-Kator. Under the proposed rule, if the child is LGBTQ, an agency could simply say no.

LGBTQ Americans aren’t the only ones to be affected by the proposal — because there is no federal statute specifically banning HHS programs from discriminating on the basis of religion, Christian foster care and other agencies could refuse to place children with parents who are not Christian, Brogan-Kator said. In fact, the proposal appears to have arisen from such situations, according to the Post. In January, for example, HHS granted a special waiver to an agency that requires foster parents to declare their faith in Jesus Christ.

By keeping kids from finding homes, the rule could worsen what advocates call the “foster care to prison pipeline,” in which youth go from the foster system to the correctional system. One quarter of youth in foster care will be involved in the criminal justice system within two years of leaving that care, according to Teen Vogue — and since black youth, LGBTQ youth, and young people with mental illness are overrepresented in foster care, they are especially at risk. Under the new rule, “we’re going to be funneling kids in foster care through the juvenile justice system,” Kayee said.

And the proposal would have impacts far beyond the foster care system. Federally-funded programs for the prevention of HIV and other sexually transmitted infections, as well as addiction treatment programs and other services, would all be allowed to discriminate against LGBTQ people under the rule.

The HHS proposal is just the latest in a long line of moves by the Trump administration to permit discrimination against LGBTQ people.

In February 2017, the Department of Education rescinded an Obama-era policy directing schools to let trans students use bathrooms corresponding with their gender identity.

In July 2017, Trump tweeted that he planned to ban trans people from serving in the military. The ban was tied up in the courts for years, but finally went into effect in April.

And the administration has made multiple efforts to roll back anti-discrimination protections. In May, it finalized a rule allowing health care providers to refuse care — including transition-related care or abortions — if it violates their “conscience” or religion. That rule, called the “refusal of care” rule, was challenged in court, and on Wednesday, a federal judge in the Southern District of New York struck it down, saying it was unconstitutional.

But not long after that rule was finalized, the administration proposed a second, related rule that rolls back Obama-era regulations banning discrimination on the basis of gender identity or sexual orientation in health care settings. This rule would allow providers to refuse to see trans patients, even for care that has nothing to do with transitioning. “This could make patients feel more unsafe in accessing care and make it so that they don’t access care at all,” Dr. Meera Shah, the associate medical director and director of gender-affirming care at Planned Parenthood Hudson Peconic in New York state, told Vox at the time.

The rule proposed Friday also isn’t the first time the Trump administration has taken action affecting LGBTQ youth in the foster care system. Earlier this year, the administration proposed a rule that would stop the Adoption and Foster Care Analysis and Reporting System ― which collects demographic data on foster children and parents from around the country ― from keeping data on sexual orientation. This would make it even harder to measure the impact of the Trump administration’s other policies on LGBTQ people, Brogan-Kator said.

The administration has cast the latest proposed change at HHS as a win for religious freedom. “The proposed rule represents the Trump Administration’s strong commitment to the rule of law ― the Constitution, federal statutes, and Supreme Court decisions,” the department said in a press release on Friday. “These require that the federal government not infringe on religious freedom in its operation of HHS grant programs and address the impact of regulatory actions on small entities.”

“The right of religious freedom protects personal belief,” Katy Joseph, policy and legislative advisor for the nonprofit Interfaith Alliance, said in a statement to media on Friday. “It does not permit the use of taxpayer funds to shame, exclude, or reject others because they do not share our faith.”

Meanwhile, for Kayee — who is now 23, in college, and the co-founder of a youth organization called MY Generation focused on kids of color — the rule change is just a way for the Trump administration to step up existing discrimination against Muslims, people of color, immigrants, and LGBTQ people.

American law and policy, including anti-terrorism programs that target Muslim communities, already send the message that “your existence does not matter to us,” she said. The new rule just makes that message all the more clear.

The rumors of Kim Jong Un’s “grave” illness, explained
A Pastafarian hilariously trolled a town council meeting. The stakes are profoundly serious.
The US will revoke visas for Saudi suspects in Jamal Khashoggi’s killing
Study: Trump rallies may be responsible for an estimated 700 Covid-19 deaths
Always in Season connects the history of lynching in America to its horrifying present
One way Trump could block the stimulus bill: A pocket veto