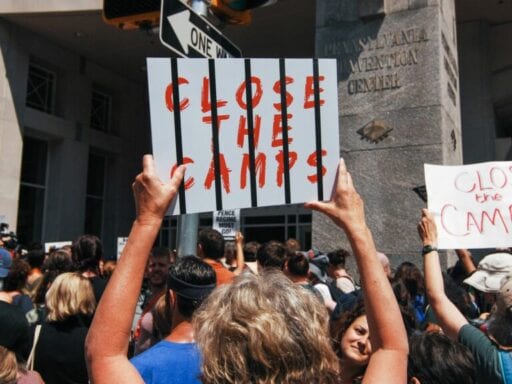 Share
Loading...
Hundreds of people protest against the detention of refugees along the southern border in Philadelphia on July 12, 2019. | Cory Clark/NurPhoto via Getty Images

Migrants families need to be released from detention after 20 days. A new Trump rule could change that by rolling back protections established by the Flores settlement.

Migrant families who enter the United States illegally could be subjected to indefinite detention if a new regulation announced by the Trump administration on Wednesday goes into effect.

Right now, migrant families can be held up to 20 days in jail, which is the maximum amount of time a child can be subjected to detention in a non-licensed facility. That limit was established by the Flores settlement, a lawsuit over mistreatment of unaccompanied minors settled in 1997 that requires the government to keep children in custody in “the least restrictive conditions” possible.

The new rule, announced by acting Homeland Security Secretary Kevin McAleenan, would roll back these protections. (Vox explained a draft version of the rule in September 2018, which has already been challenged in court.) Families could be held indefinitely — for months or even longer — while their cases are decided.

It’s one of the many immigration regulations the administration has introduced in recent months — such as green card restrictions for those who receive public benefits — to discourage migrants from coming to the US. The Trump administration blamed the rules on family detention for the separation of parents and children at the border, a consequence of the Trump administration’s “zero tolerance” policy on illegal border crossings.

The new rule will be published in the Federal Register later this week and will go into effect after 60 days, but it will most likely face immediate legal challenges. It also must be approved by Judge Dolly Gee of United States District Court for the Central District of California, the judge who first approved the Flores settlement in 1997.

The Flores v. Reno settlement has protected migrant children by guaranteeing two things: Rather than being put in custody, children should be placed with a relative or close friend as soon as possible; and for those that are inevitably in custody, they should be kept in the “least restrictive conditions.”

The settlement was first reached between the federal government and the lawsuit’s plaintiffs in 1997, when it only applied to unaccompanied minors. That changed in 2014, when the Obama administration kept families in detention to discourage migrants from coming to the US. Following a lawsuit from immigration advocates, judges ruled that the Flores settlement applied to minors who enter the US with their parents as well and set a strict standard of detention no longer than 20 days.

Although the court didn’t specify that the 20-day limit applied to parents, it became common practice to release them with their children after the 20 days.

“This single ruling has substantially caused and continued to fuel the current family unit crisis and the unprecedented flow of Central American families and minors illegally crossing our border,” said McAleenan said during a Wednesday press conference. “The new rule closes the legal loophole that arose from the reinterpretation of Flores.”

When the government’s family separation policy caused outrage last year, the administration pointed to the settlement as an excuse, as Vox’s Dara Lind and Dylan Scott reported:

The administration has fingered Flores v. Reno, or the “Flores settlement,” as the reason it is “forced” to separate parents from their children to prosecute them. It claims that because it cannot keep parents and children in immigration detention together, it has no choice but to detain parents in immigration detention (after they’ve been criminally prosecuted for illegal entry) and send the children to the Department of Health and Human Services as “unaccompanied alien children.”

Although the government said it is committed to treating the children with “dignity, respect, and special concern,” five migrant children have died in federal custody in the past year. DHS is also embroiled in a lawsuit that alleges negligence toward detainees’ health.

Officials say that family cases will be resolved in three months, but there’s a growing immigration court backlog. However long the cases take, children will be held indefinitely with their parents as they await a trial.

How Big Mouth season 2 turns the horrors of puberty into sweet, nuanced comedy
Congresswomen, press to face off in softball game, fundraise for breast cancer survivors
Here’s the slogan Democrats should run on: “Support Checks and Balances. Elect Democrats.”
One Good Thing: After the NBA walkout, the movie of the week is Netflix’s High Flying Bird
Eighth Grade’s R rating deters actual 8th graders from seeing it. What a shame.
Mitch McConnell outlines what a second Trump impeachment trial might look like