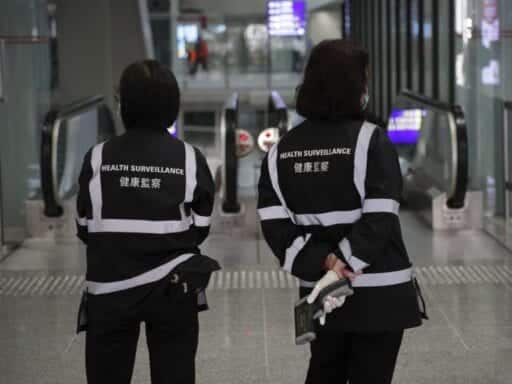 Share
Loading...
A health surveillance officer with a temperature scanner waits for passengers at the Hong Kong International airport on January 4, 2020. Hong Kong authorities are on alert as news spread about the infectious disease outbreak in Wuhan, a mainland Chinese city. | Andy Wong/AP

No one has died, and the disease doesn’t appear to be spreading among humans — but it’s early days.

The mysterious outbreak in China causing dozens of people to fall sick with pneumonia may be the result of a new coronavirus, a member of the same family of viruses that caused SARS.

On Thursday, a report on the state broadcaster China Central Television said 15 of the people who had become ill tested positive for the new virus. In one patient, Chinese investigators conducted whole genome sequencing, confirming the “typical coronavirus appearance,” Xu Jianguo, a member of the Chinese Academy of Engineering who led the assessment, told state TV.

The World Health Organization confirmed the finding and applauded China’s efforts. “Preliminary identification of a novel virus in a short period of time is a notable achievement and demonstrates China’s increased capacity to manage new outbreaks,” the agency said in a statement. In the SARS outbreak of 2003, China was heavily criticized for withholding information about the outbreak for too long.

The new outbreak was first identified on December 30 in Wuhan, a mainland city of 19 million and the capital of Hubei, one of China’s most populous provinces, according to a January 5 update from Wuhan’s municipal health commission. The outbreak has been linked to a food market, where vendors peddle seafood and animals, such as birds and rabbits, which could mean the new disease has made the leap from animals to humans. To date, there are 59 cases in Wuhan. Seven of the patients are seriously ill, though no one has died. Separately, Hong Kong has reported possible cases.

Coronaviruses attack the respiratory system and can target the cells deep within the lungs. “There are tons of coronaviruses,” said Vincent Munster, an emerging viral diseases researcher at the National Institute of Allergy and Infectious Diseases. The viruses typically emerge from wildlife — in particular bats — and spill over into humans. Two of the six that are known to infect humans, such as SARS and MERS, can cause severe pneumonia and even death. The rest lead to milder symptoms, like the common cold. In the case of SARS, the virus was discovered in China in 2003, after it jumped from civet cats — a food delicacy in China — to humans. It went on to spread to two dozen countries and eventually killed 774 people and infected more than 8,000.

In the current outbreak, there are some reassuring signs. “According to Chinese authorities, the virus in question can cause severe illness in some patients and does not transmit readily between people,” the WHO said in a statement. So far, the main symptoms reported are fever followed by difficulty breathing, the WHO said. In chest X-rays, patients appear to have lesions in both lungs. While seven of the 59 cases in Wuhan are serious, no one has died as a result of the disease, according to Chinese authorities.

WHO is not recommending any measures for travelers and advising against travel or trade restrictions on China, even on the cusp of China’s Lunar New Year holiday, during which hundreds of millions of people are expected to travel, according to the South China Morning Post.

But it’s still early days. Researchers will need to confirm that this new virus is without a doubt the driver of the outbreak, said Marion Koopmans, who studies emerging infectious diseases as director of the department of virology at Erasmus Medical Center in Rotterdam. They’ll then need to confirm which patients have the virus, and figure out what type of illness it causes in the confirmed cases.

“If [the new virus] is indeed the likely cause, and seeded at the market, a key question is how transmissible this is,” Koopmans said. Viruses that spill over from animals may not be very transmissible “if they sit deep in the lungs and are not shed easily,” she added. Health officials would also need to find out which animal is spreading the virus to humans — the “animal reservoir” — and how the virus made the jump, and then make sure the animal is contained.

It’s also possible we’ll learn that human-to-human transmission is indeed occurring in this outbreak, despite the early reports. As David Hui, an expert in emerging infections at the Chinese University of Hong Kong, told the New York Times, the minimum incubation period for some viral infections — 15 days — hadn’t even passed since the outbreak was first reported. This means more of the contacts of the known cases may fall sick in the coming days.

For now, all the known patients are in isolation, and 163 contacts of the sick in Wuhan are being followed to see if they develop symptoms.

6 states will vote in Tuesday’s GOP presidential primary. Trump will win all 6.
Democrats’ $3 trillion opening bid for the next stimulus package, explained
The best $80 I ever spent: TSA PreCheck
Trump mocks Elizabeth Warren’s heritage with talk of offering her a DNA test
Why Elizabeth Warren is staying in the race
Amazon Prime one-day shipping apparently doesn’t mean one-day delivery