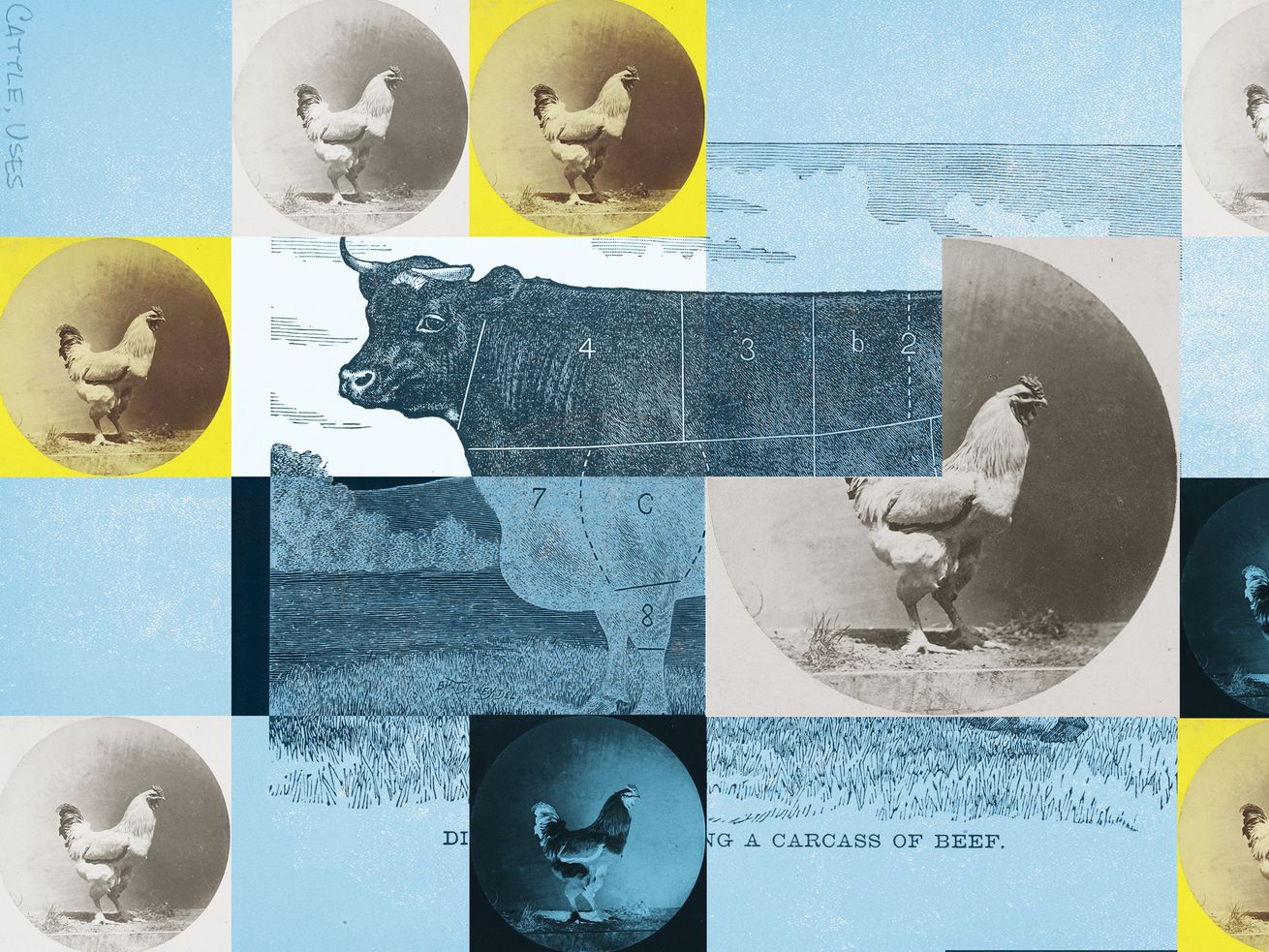 Changing our diets really can improve the world. But swapping beef for chicken might actually make things worse.

Most people have heard it by now: Our meat habit is bad for the world. Polling suggests that tens of millions of people are taking this message seriously: One in four Americans said they tried to cut back on meat in the last year, and half of those cited environmental concerns as a major reason. The popular food site Epicurious recently announced they’ve stopped publishing recipes with beef in them, because of beef’s climate impacts, setting off the latest round of discussion on meat’s effects on the environment.

Cutting meat consumption is as smart an idea as advertised. Industrial farming — the source of 99 percent of the meat Americans eat — provides the world with cheap meat, but it does so at a terrible environmental and moral cost.

Where it gets complicated is when people decide which meat, exactly, they’ll be cutting back on. Often, it’s beef that loses out in that calculus. And often, the messaging is that we can save the world by switching out our beef consumption for chicken.

The problem with this message is that switching beef for chicken basically amounts to trading one moral catastrophe for another.

The environmental reasons for cutting beef from one’s diet are clear. Most of the climate impact of animal agriculture comes from raising cows for beef. Cows produce methane, a greenhouse gas that is a major contributor to global warming; it’s much more potent than carbon dioxide. Transitioning away from eating beef to eating other factory-farmed animal products undoubtedly reduces the carbon impact of a person’s diet.

But the transition away from beef can end up being a Pyrrhic victory if it drives up the world’s rapidly rising chicken consumption. That ends up swapping one disaster — the climate crisis and beef farming’s role in it — for another: the moral disaster of industrial chicken production.

To put it simply, it takes many, many more chicken lives than cow lives to feed people. Cows are big, so raising one produces about 500 pounds of beef — and at the rate at which the average American eats beef, it takes about 8.5 years for one person to eat one cow. But chickens are much smaller, producing only a few pounds of meat per bird, with the average American eating about one whole chicken every two weeks. To put it another way, each year we eat about 23 chickens and just over one-tenth of one cow (and about a third of one pig).

The choice to swap beef for chicken is further compounded by the differences in their quality of life. Cows are raised for slaughter on pastures and feedlots — enclosed spaces where they’re fed grain in preparation for slaughter. Most animal well-being experts say that the life of a cow raised for beef is punctuated by traumatic events and cut needlessly short, but it’s not ceaseless torture.

On the other hand, factory-farmed chickens — and that’s 99 percent of all chickens we eat — have an awful life from the moment they’re born to the moment they’re slaughtered. The most efficient way to raise chickens is in massive, ammonia-choked, noisy warehouses, where the birds grow so rapidly (due to genetic selection for excessive size) that their legs can’t support their weight. They live about six weeks and then are killed.

So switching from cows to chickens is a way to somewhat reduce carbon emissions — but it comes with a massive increase in animal suffering.

Choosing between the two is a knotty dilemma that tends not to be discussed often. But this tension isn’t inevitable. After all, climate advocates and animal advocates are on the same side: supporting a transition away from industrial agriculture. And most people care about both animals and the environment, so addressing factory farming is a simple win-win.

The solution to factory farming’s many harms can’t be shuffling consumers between chicken and beef depending which of their devastating impacts is on the top of our minds. And consumers shouldn’t accept as inevitable the choice between torturing animals and dramatically worsening global warming. There is a path to a food system that doesn’t force us to choose, but we’re going to need to take much bigger steps, in terms of policy and consumer choice, to get there.

The climate impacts of animal agriculture

There’s no way around it: Raising beef really is bad for the world.

About 15 percent of all global greenhouse gas emissions come from livestock. Beef is the biggest culprit, accounting for about 65 percent of all greenhouse gas emissions from livestock. Cattle produce methane, and they also require lots of carbon-intensive land conversion and carbon-intensive feed. They’re about 20 times more resource costly per calorie than veggies, and about three times more resource costly per calorie than fish or chicken.

Beef’s defenders have argued that it doesn’t have to be that way. Proposals from feeding cattle seaweed in order to reduce their methane emissions to “regenerative farming” that can improve soil and land have been aired, and some have been implemented on a small scale.

But American consumers shouldn’t kid themselves: If you purchase beef from a grocery store shelf or in a restaurant in America, unless you go very far out of your way to trace, source, and verify the sustainable history of that meat, you’re getting the product of a carbon-intensive industrial process.

Epicurious nodded to this reality in its announcement that it would stop publishing beef recipes: “We know that some people might assume that this decision signals some sort of vendetta against cows — or the people who eat them. But this decision was not made because we hate hamburgers (we don’t!). Instead, our shift is solely about sustainability, about not giving airtime to one of the world’s worst climate offenders. We think of this decision as not anti-beef but rather pro-planet.”

A May 20 article in the New York Times about the rise of “climatarians” underscored the emerging primacy of climate in people’s dietary choices, noting that climate-conscious eaters have moved in a meatless direction, but that many still believe that “chicken or lamb are much better choices than beef.”

It’s entirely understandable that some consumers have decided it’s time to move away from beef. And yes, individual consumer decisions do matter: Researchers have studied what’s called the elasticity of supply for meat — that is, how much consumer demand affects production — and determined that when consumers demand fewer hamburgers, fewer cows are raised.

But whether that’s on net a good thing depends a lot on what you choose instead.

It’s no fun to be a cow on a factory farm. But animal welfare experts agree: Being a chicken is much worse.

That’s because of the commercial incentives behind both cow and chicken production. Ranchers have found it most efficient to raise cows outdoors on pasture and then fatten them for slaughter on feedlots. There’s a lot wrong with how we raise them — cows are painfully dehorned, mass distribution of antibiotics keeps them healthy at the expense of breeding antibiotic resistance, and while there’s a federal law that requires pigs and cattle to be rendered unconscious prior to slaughter, it’s not always followed and only minimally enforced.

But chickens have it much worse. The cheapest way to raise chickens is in massive, crowded indoor warehouses where they never see the sun. Over time, companies have bred chickens to grow so fast their joints fail as they reach full size. Observational studies suggest they spend much of their time sitting still, in too much pain to move.

“In most cases, they suffer far more than beef cattle, who have more legal protections, suffer fewer health problems, and are generally less intensively confined,” Leah Garces, the president of Mercy for Animals, has argued.

That’s why many advocates calling for an end to industrial farming have mixed feelings about the movement against beef. Is it right to try to save on some carbon emissions by causing even more animal suffering?

And chicken is no panacea for the climate either. “Its impact on the climate only looks benign when compared with beef’s,” Garces points out. “Greenhouse gas emissions per serving of poultry are 11 times higher than those for one serving of beans, so swapping beef with chicken is akin to swapping a Hummer with a Ford F-150, not a Prius.”

Consumers who are reconsidering their meat consumption — for the sake of animals, the planet, or both — are doing a courageous thing, and the point of observing the added complications of this choice isn’t to discourage them. Fixing our broken food system is going to require substantial policy and corporate changes, as well as consumers making better choices. The beef versus chicken conversation is part of how we get there.

But what the dilemma lays bare is that there’s no meat consumption that will save the world. Meat is one of the most popular foods, and yet building a better world is going to require inducing consumers to switch away from it — and not just switch between different categories of meat as they weigh the different environmental and moral catastrophes it causes.

That’s why some animal advocates in the last few years have switched from convincing consumers to go vegan — which can be too big of a leap for many — to advocating for plant-based meat products. These plant-based products are already difficult to distinguish from the originals, while having a lighter carbon footprint and no impact on animals. If you avoid beef by switching to plant-based meat products, you really are improving the world and improving conditions for the humans and animals that live on it.

But despite all these complications, when prominent food sites take beef out of their lineup or when Americans tell pollsters they’re trying to cut back on beef, it’s cause for optimism — even though in the short term, depending what they replace it with, it could make things worse. Our food system delivers meat cheaply at an awful price. Starting more conversations about that price and how we can mitigate it is a good thing, even if it’s a conversation a long way from a satisfying resolution.

Amid calls for his removal, Trump says he’ll support the transition to a “new administration”
The West Hollywood City Council wants to remove Trump’s star from the Walk of Fame
Why some labs work on making viruses deadlier — and why they should stop
The best Christmas movies aren't about Christmas
Under Trump, refugee admissions are falling way short — except for Europeans
Democrats are already at odds over how to win in 2022